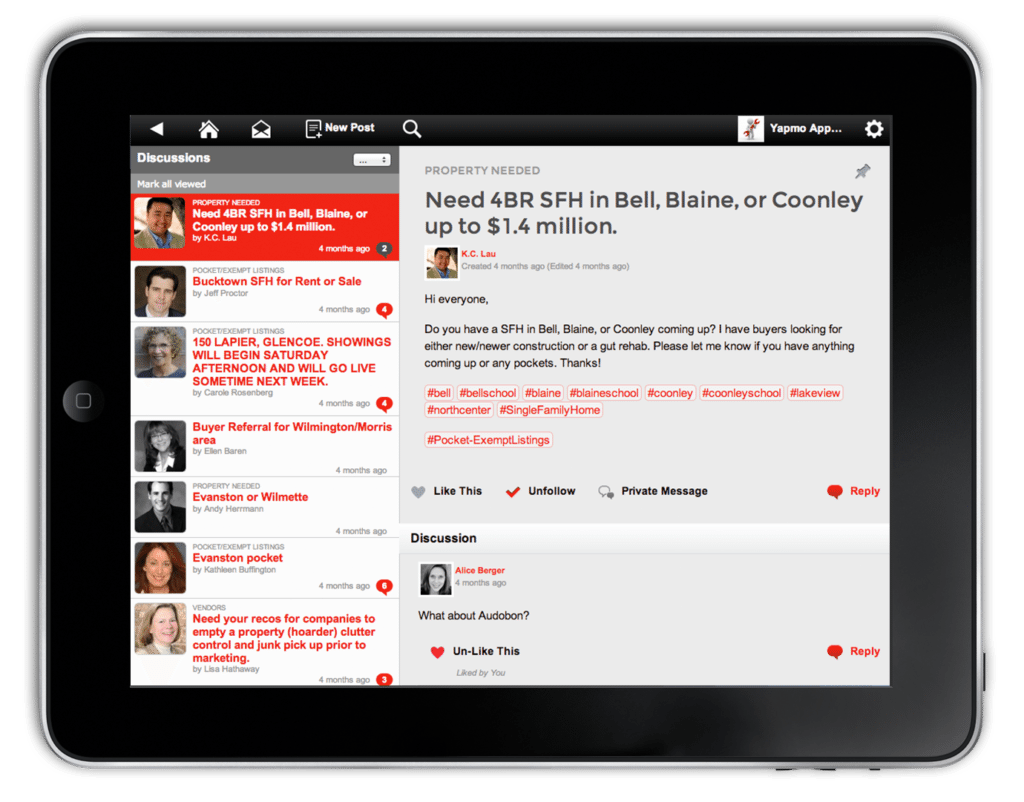 The relentless deluge of emails that flood agents’ inboxes everyday has spurred many to either altogether ignore those intended for groups or bat them into spam folders.

“When they have spare time, which is pretty much never, they say, ‘OK, I’m going to read them,’ ” said Paul Everton, co-founder and CEO of Yapmo. “They’ve pretty much missed every point of collaboration that they could have had.”

Against this backdrop, Yapmo aims to improve the potential for group emails to bear fruit. Through its use of hashtags, the communication platform purportedly makes it possible for agents to see only group messages that are directly relevant to them.

Chicago-based broker @properties and Atlanta Fine Homes Sotheby’s International are among brokers who have adopted Yapmo, and Everton says 80 percent of the employees at the two firms have started consistently using the platform.

Something important to note about Yapmo is that it is not an email filter. It’s a platform that supplements email and is dedicated to managing the flow of group messages.

Agents using Yapmo are able to control the types of messages that they receive by adding hashtags to their Yapmo profiles. The service then surfaces for that agent all messages that bear those hashtags, which are added by agents sending the messages.

While the agent is alerted only to messages on Yapmo tagged with hashtags that the agent follows, the agent may uncover others messages by manually searching additional tags.

“I have these 1,000 agents’ knowledge at my fingertips that I can search through,” Everton said.

In addition to helping agents sniff out contractors and get the inside scoop on neighborhoods, the platform helps buyer’s and listing agents bypass multiple listing services (MLSs) and connect internally.

Yapmo offered an example of how that dynamic could take shape.

1. Broker A, who has an available internal listing to sell, creates a post in Yapmo with the property’s features (neighborhood, size and price). He adds hashtags to this post like “Tribeca-2BR.”

2. Broker B, who is interested in two-bedroom apartments in Tribeca (and has added “Tribeca-2BR” to his profile) receives a notification of this new listing.

3. All brokers who are not interested in two-bedroom apartments in Tribeca receive no notification. However, these brokers can still view the messages regarding the listing and associated discussions at their leisure by searching “Tribeca-2BR.”

4. Broker A and Broker B can quickly share information and close the deal before listing the property on the MLS.

Thaddeus Wong, co-founder of @properties, called Yapmo in March a powerful tool that generates off-market transactions and is a “game changer” for @properties agents.

Perhaps the biggest challenge that a service likes Yapmo faces is inertia. Agents may balk at the prospect of monitoring yet another message system.

After one or two months of providing email integration with Yapmo, a brokerage that uses Yapmo then deactivates its group email lists to complete a transition to the group-message platform.

While agents may filter out most messages sent on Yapmo, brokerages have the option of adding certain tags that automatically push messages to large groups of agents. That ensures that brokerages are still able to effectively transmit crucial information to all their employees in group messages, Everton said.

California Realtors warning sellers about pocket listings
Back to top
Only 3 days left to register for Inman Connect Las Vegas before prices go up! Don't miss the premier event for real estate pros.Register Now ×
Limited Time Offer: Get 1 year of Inman Select for $199SUBSCRIBE×
Inmanpot
Log in
If you created your account with Google or Facebook
Don't have an account?
Create an Account
Forgot your password?
No Problem