Most “Gen X” and “Gen Y” homebuyers are using mobile devices when they search for homes, but when it comes to choosing an agent, buyers of all ages are much more likely to rely on referrals from a friend, relative or neighbor than to end up with an agent they find online.

That’s according to an annual survey by the National Association of Realtors, which found that among buyers 59 and older, 20 percent or less searched for a home via a mobile site or app.

Among homebuyers 33 and younger — a group that’s known as “millennials” or “Gen Y” — 58 percent used a mobile website or application to search for a home. For “Gen X” buyers 34 to 48, the figure is 53 percent.

Buyers of all ages were most likely to find their agent through a referral from a friend, relative or neighbor. More than half of millennials, 52 percent, found their agent that way, while older buyers were more likely than millennials to use an agent they had used previously to buy or sell a home.

Only 9 percent of all buyers found their agent through an online website. The “Silent Generation,” those 68 to 88, were the least likely to find their agent online (6 percent), and were more likely than younger age groups to find an agent through a for sale or open house sign or through a personal contact from the agent via phone or email.

This year’s 2014 NAR Home Buyer and Seller Generational Trends did not include numbers on which types of websites were most popular among homebuyers.

“[I]t’s fairly normal to drop some questions from the survey when new ones are added to track market developments,” NAR spokesman Walt Molony told Inman News.

“There are better resources for ranking websites, which isn’t the intent of the survey,” Molony said.

Use of Internet to search for homes 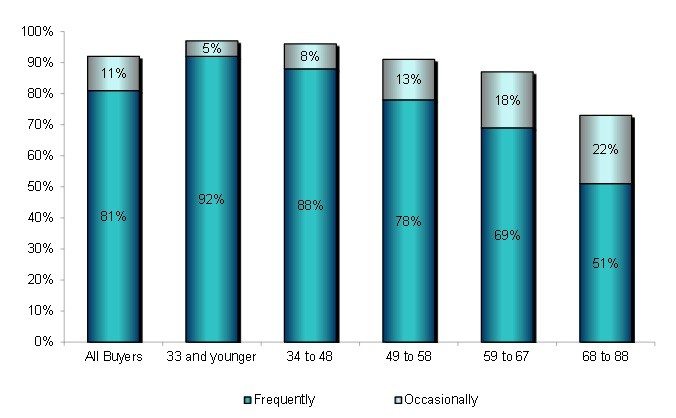 Millennials accounted for the largest share of homebuyers, 31 percent, followed closely by Gen Xers and baby boomers, both at 30 percent. The Silent Generation made up 9 percent of buyers. Three-quarters of millennials were first-time homebuyers. Only 12 percent of sellers were millennials.

“Given that millennials are the largest generation in history after the baby boomers, it means there is a potential for strong underlying demand. Moreover, their aspiration and the long-term investment aspect to owning a home remain solid among young people,” said Lawrence Yun, NAR’s chief economist, in a statement.

“However, the challenges of tight credit, limited inventory, eroding affordability and high debt loads have limited the capacity of young people to own.”

Among buyers overall, 88 percent financed their home purchase. Predictably, millennials were the most likely to finance (97 percent), while Silent Generation buyers were least likely to (55 percent).

Millennials financed a median 95 percent of the purchase compared with 90 percent for all buyers. A fifth of millennials said they had a difficult time saving for a down payment and, among them, 56 percent said student loan debt delayed saving, while older age groups (except for the Silent Generation) were more likely than millennials to cite credit card debt as an impediment to saving.

Overall, 12 percent of buyers reported delaying their home purchase due to debt.

Among all the age groups, millennials were most likely to think their home was a good financial investment: 87 percent, compared with 81 percent among buyers overall.

Notwithstanding the challenges for buyers, it seems millennial sellers have reversed a greater tendency to use a limited-service real estate brokerage observed in last year’s survey. This year, millenials differed little from sellers overall in this area with 19 percent of all sellers choosing a limited-service or minimum-service broker. By comparison, 34 percent of millennials opted not to choose a full-service broker last year. This change may be due to increases in equity from rising home prices.

Millennials were also less likely to list their homes as for-sale-by-owner, or FSBO, properties in this year’s survey, as just 10 percent did, down from 13 percent last year. Among sellers overall, 9 percent sold as FSBOs.

Psst ... Have you heard? Gen Y wants to live near work 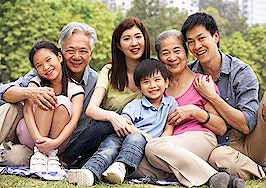 4 things millennial homebuyers desire in a real estate agent
Back to top
Only 3 days left to register for Inman Connect Las Vegas before prices go up! Don't miss the premier event for real estate pros.Register Now ×
Limited Time Offer: Get 1 year of Inman Select for $199SUBSCRIBE×
Inmanpot
Log in
If you created your account with Google or Facebook
Don't have an account?
Create an Account
Forgot your password?
No Problem