Irvine, Calif.-based Big Purple Dot began developing websites for agents in 2011, but has pivoted to facilitate joint marketing and lead referrals between agents and lenders with a customer relationship management system.

With the Big Purple Dot platform, agents get a free CRM and a chance to work with a lender who may cover a portion of their marketing costs on portals like Zillow, Trulia and realtor.com, and for offline marketing like mailers and billboards, Big Purple Dot CEO Roxana Davidoff told Inman News.

Big Purple Dot’s paying clients are loan officers who want to co-market with agents in online and offline ads and track their marketing investments while securing an exclusive referral arrangement with the agents they help promote.

For both online and offline co-marketing spends, Big Purple Dot attaches a tracking number to the ads that helps lenders know which agent leads came from which ads they helped pay for.

Agents agree to funnel all leads — when they determine them to be qualified — to the lender they co-market with through the platform, Davidoff said.

Typically, agents work with just one lender while a loan officer usually works with between seven and 10 agents on the platform, Davidoff said.

Big Purple Dot made the change from website developer to lead management and referral firm two months ago.

“There was a lack of a bridge between lenders and agents, and that’s where we come in,” Davidoff said.

When agents sign up for the free CRM and they don’t already have a preferred lender within the platform, a rep from Big Purple Dot calls them and asks if they have a lender they’re working with. If not, the firm helps connect them to one.

Lenders using the platform also recruit agents they want to work with.

Brett Bonecutter, a branch manager at Monarch Capital Home Loans in Aliso Viejo, Calif., began heavy use of the platform in his office in January and the results have been game-changing, he said.

Currently, 12 loan officers in his office use Big Purple Dot to connect with dozens of agents, and the firm is actively reaching out to more agents, Bonecutter said.

Since adopting the platform in January, the number of leads the branch receives from agents has grown astronomically, Bonecutter said. The branch’s lead count from agents ballooned particularly when a few agents it works with on Big Purple Dot gave it access to their complete contact list, he said.

Big Purple Dot is the latest CRM to join Zillow’s “Tech Connect” program where Zillow leads are fed in real time to a handful of Zillow-approved CRM systems.

Last June, Zillow launched a lender-agent co-marketing program that allows Zillow subscribers to invite lenders to subsidize a portion of their ad spend on the portal in exchange for inclusion as a “preferred lender” in the ad. The program does not involve lead referrals, just shared display ad space. 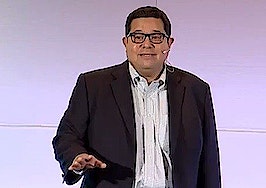 How to choose the right CRM for your real estate business
Back to top
Only 3 days left to register for Inman Connect Las Vegas before prices go up! Don't miss the premier event for real estate pros.Register Now ×
Limited Time Offer: Get 1 year of Inman Select for $199SUBSCRIBE×
Inmanpot
Log in
If you created your account with Google or Facebook
Don't have an account?
Create an Account
Forgot your password?
No Problem