In 2013, homes in the Philadelphia metro area marketed in the local multiple listing service sold for between 10 and 32 percent more than properties not marketed via the MLS, according to a study from TREND MLS.

The study analyzed existing, single-family home sales above $50,000 in 13 counties in Pennsylvania, New Jersey and Delaware between 2000 and 2013.

In order to figure out what share of homes were marketed on the MLS, TREND matched public records sale information to MLS sale information. Where no matches were found between a public record sale and an MLS sale, TREND concluded the property was sold outside of the MLS.

Non-arm’s length transactions, sheriff’s sales, sales with corporate or institutional ownership involvement and blanket sales covering more than one property were filtered out of the analysis. For-sale-by-owner properties were not. TREND also did not analyze prices by square foot or control for property characteristics such as size and age.

King of Prussia, Pennsylvania-based TREND looked at on-MLS home sales and their sales prices during four distinct periods in the last 14 years. 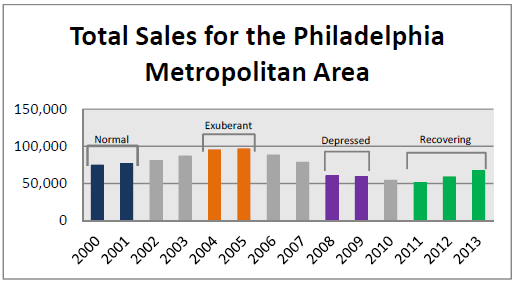 The study found that, overall, the share of homes marketed off the MLS has been declining from 31 percent in the first half of the 2000s to 18 percent in the last three years. 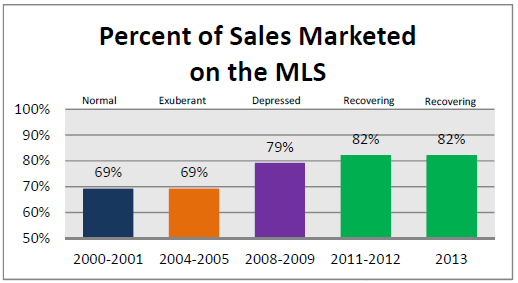 Whether homes were marketed on the MLS varied somewhat by whether they are located in urban, suburban or rural areas. Last year, 79 percent of homes sold in the City and County of Philadelphia were placed on the MLS compared to between 84 and 89 percent of the homes in the nine suburban counties surrounding the city.

In the three rural counties included in the study, between 76 and 84 percent of homes were marketed on the MLS.

The results contrast somewhat with a CoreLogic study that found that 43 percent of home sales in four big U.S. counties in 2013 took place either outside of the MLS or with little or no MLS exposure.

In terms of sale price, the TREND study found that homes marketed on the MLS fetched between 10 percent more in a normal market and 21 percent more in last year’s recovering market. 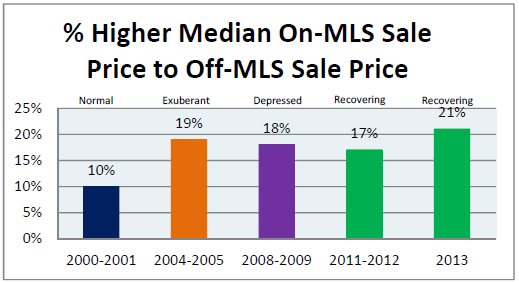 In 2013, homes in Philadelphia marketed via the MLS brought in 27 percent more than properties marketed off the MLS. There was wider variation among suburban counties: the median sales price of on-MLS homes was between 13 percent and 32 percent higher than that of off-MLS homes. In rural counties, on-MLS homes sold for between 10 and 25 percent more.

According to TREND, the higher prices were due to “exposure to the competitive marketplace and cooperative brokerage community on the MLS.” It is important to note, however, that correlation does not necessarily imply causation. The study did not take into account whether properties sold off the MLS were older, smaller or in poorer condition than those sold on the MLS, for instance.

TREND’s study results do not stand alone. They are similar to those of a study conducted by San Francisco agents Matt Fuller and Britton Jackson of Zephyr Real Estate that found that MLS-marketed single-family homes sold for 23 percent more in 2013 than homes marketed off the MLS — a difference of more than $200,000 in that market.

Like the San Francisco study, TREND’s study did not touch on how many off-MLS deals were doubled-ended. In terms of on-MLS deals, TREND has found a decline in double-ended deals over the last decade, as have other MLSs across the country.

In Philadelphia, in-office sales have dropped from 26 percent in 2005 and 2006 to 16 percent in 2013. Of those sales last year, only 1.2 percent had days on market of three days or less, indicating they were marketed outside of the MLS.