Markets are already quieting down with the approach of two holiday-shortened weeks, after two calm-shattering ones.

The five things unresolved, still on the table beside the turkey:

Federal Reserve Chairwoman Janet Yellen is doing a magnificent job — she has not missed a trick. Her post-meeting statement this week was perfection in elucidated obfuscation, simultaneously removing “considerable period” and saying that previous guidance was unchanged.

Her most important aside: The Fed is prepared to lift off from zero before inflation rises to the Fed’s 2 percent target. Three self-important idiots felt the need to dissent (Fisher, Plosser and Kocherlakota), confirming the need to find a way to remove the regional Fed presidents as voting members.

Why this strengthening recovery? Stick with the theory pushed here for a long time: U.S. wages have undergone compression clear back to 1990 and may now again be world-competitive.

The wage suppression has been accidental — not a work of government — and terribly punishing to those with the lowest skills. But the painful phase may be passing. Thus the most flexible global economy does better than the others, overmanaged or rigid.

Natural gas and coal were already down, so no collateral stimulus. The benefit of the oil price drop is quirky because of currency: Oil is invoiced in dollars, so if you live with one of the many currencies devaluing versus the dollar, slim stimulus.

Oil is zero sum: Producers lose what consumers gain. The U.S. is right up there with the Saudis and Russia as the world’s largest producers. Texas will feel a chill. So will global bankers to oil companies and petro nations, and markets addled by a shuffled deck.

Obnoxious sidebar: For hypocrisy nothing beats New York Gov. Andrew Cuomo banning fracking in the state. You’ll burn your share, but production is for lower castes, Dakota and Okie untouchables.

The 1973 bumper sticker had it right for Yankees, whose energy bills are rising this winter (no new icky pipelines, no LNG terminals, no new transmission lines from Hydro-Quebec): “Let the *******s freeze in the dark!”

China’s slowdown is more evident every day, although camouflaged by official statistics. In transition from a levitating, investment-led economy to a higher-order, consumer-led one, slowdown is inevitable, imbalances taking a decade or more to wash out.

But China’s levitation has always been predatory, pulling down Japan, Europe and the U.S.; a slowdown may well do less damage to wages in those places.

China’s slowdown hurts the commodity producers who have fed its unsustainable explosion. It is well-nigh impossible to evaluate the effects of the ex-U.S. slowdown on the U.S., but equally unlikely that there will be no effect on us.

Vladimir is not a new czar. The czars (and Soviets) were supported by secret police, and Vladimir is just a crooked cop, a gangland boss. You get to be capo di tutti capi until you make a big mistake.

Russia has lost 40 percent of its oil revenue; the remainder is enough to make oil-company debt payments, but all the grease is gone for the lesser mobsters. Combined with the ruble rumble, in a month stores will be empty of imported goods, the only things worth buying in a corrupt petro-state making nothing for itself.

Russians still bluster support for muscular nationalism. But they are thinking Crimea and a smoldering Ukraine brought what reward? Beets, borscht, cabbage, onions and potatoes… again. 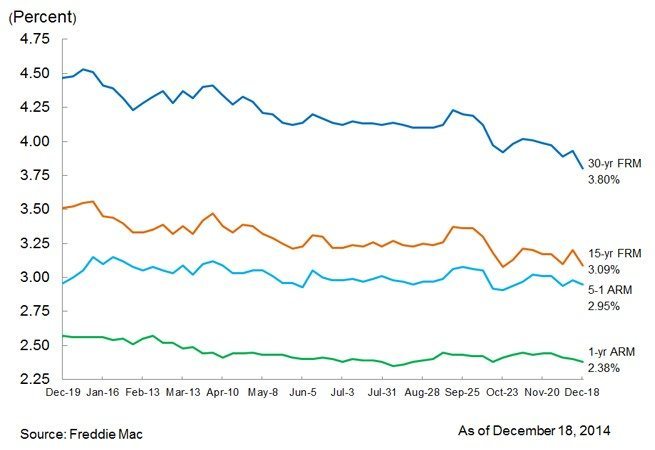 Mortgage rates at lows for the year. 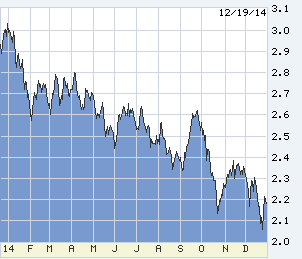 Ten-year T-note in all of 2014. Downtrend still intact, but we’ll need more and more bad news overseas to keep going.