Each look outward into a new year in this space begins with Peter Drucker’s dictum: “Nobody can predict the future. The idea is to have a firm grasp of the present.”

2015 is the least predictable year ahead in my memory. Humility whispers: Unpredictability may mean anything from exciting to a snooze.

The outlook breaks cleanly into two pieces: global components relatively predictable and those not.

“Relatively” is not just a hedge. Try to think of the future as an opening cone of probability: Some aspects of future events lie within narrow cones, others immeasurably wide.

Narrow: The Colorado Rockies may not finish last again, but they’re not going to the World Series.

Wide: A quarterback will be taken first in next year’s NFL draft. How will he do next fall? Half of QBs taken No. 1 are complete busts.

The narrow-cone list for 2015 begins with our government, which is unlikely to do anything affecting the economy. Not even the Fed. It will almost certainly raise the overnight cost of money, but at a pace and to an extent designed to follow the economy, not to lead it; to reduce stimulus, not to end it.

Europe is narrow-cone. So long as it stays on the euro it cannot recover, QE or not.

Japan won’t change much: not recovering, deferring ultimate default on government debt, most of the pain internal. Extended weakness and deflation in those two places, more than one-third of the global economy, will continue to exert powerful downward force on inflation and interest rates everywhere. 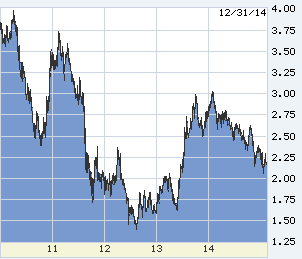 10-year U.S. T-note, five years back. Add 1.8 percent to get 30-fixed mortgage rate without points. I assume in 2015 we’ll stay within a half-percent of where we are unless something big comes along.

The U.S. economy? The whole shebang is likely to grow closer to 3 percent next year than 2.5 percent, much higher or lower not likely. Manufacturing will continue to do well, U.S. wages more competitive now, energy cheaper here than for any competitor.

Housing will stay thin, this recovery the first in 80 years in which housing will trail and be dependent on jobs and incomes instead of the other way around.

For the wide-cone list, begin with the obvious: stocks. Nobody has any idea, or should. Do something sensible: Check in five or 10 years.

The most important wide-cone variable, maybe more so than all the others put together, is U.S. incomes. Every traditional indicator says the job market is so tight that incomes should be rising fast. They’re not, but they might. If incomes begin to rise rapidly, that would change the Fed’s calculus, maybe behind the inflation curve.

The opposite is more likely. The volume of global trade and intensity of competition are both without precedent. U.S. employment could plateau, wage growth barely matching inflation whenever businesses hit their global limits to pay up in the U.S., no matter how tight traditional measures of the domestic labor market.

The most unpredictable situation is Russia. The most expert analysis of Russia’s condition and options today is confounded by Vladimir Putin.

Putin is nuts, a uniquely Russian fruitcake. Entitled and simultaneously contemptuous and envious of the outside world, with all of the czars’ and Stalin’s ambitions and mendacity but none of Stalin’s competence and caution. A cornered Putin is no doubt dangerous, but Russia’s inherent weakness will tend to make it a noisy sideshow.

Churchill referred to Russia in 1939 as “a riddle, wrapped in a mystery, inside an enigma.” Today that is China, a collective without a constitution but not the gangster state that is Russia, its self-government processes incomprehensible to Westerners.

China has embarked on an absolutely necessary economic transformation, which in the near term requires a slowdown, but in the long run will help the world. China will gradually slow its investment-led overproduction mania, diminishing the damage it has done to external wages and aid to commodity producers, but gradually join the world economy as a consumer and bilateral trade partner.

China is a perfect conclusion to thinking about 2015. It is in economic transition, but despite risks is stable, and so big that it’s unlikely to lurch far in a single year.