Mortgage rates can be unpredictable, making it tricky for homebuyers and homeowners who are refinancing to decide whether to lock in a rate with their mortgage lender, or gamble that they’ll do better if they wait a week or two.

Mortgage news website The Mortgage Reports has rolled out a weekly contest designed to help prospective buyers get a better sense of where rates are headed while providing a platform for real estate agents to boost their street cred alongside other professionals in the industry.

“It’s an excellent way for real estate agents to publicize themselves,” said Dan Green, chief publishing officer of The Mortgage Reports, about the new contest.

To play “The Mortgage Rate Game,” contestants sign up for a free account and vote each week on whether they think mortgage rates will move up or down over the next two weeks. 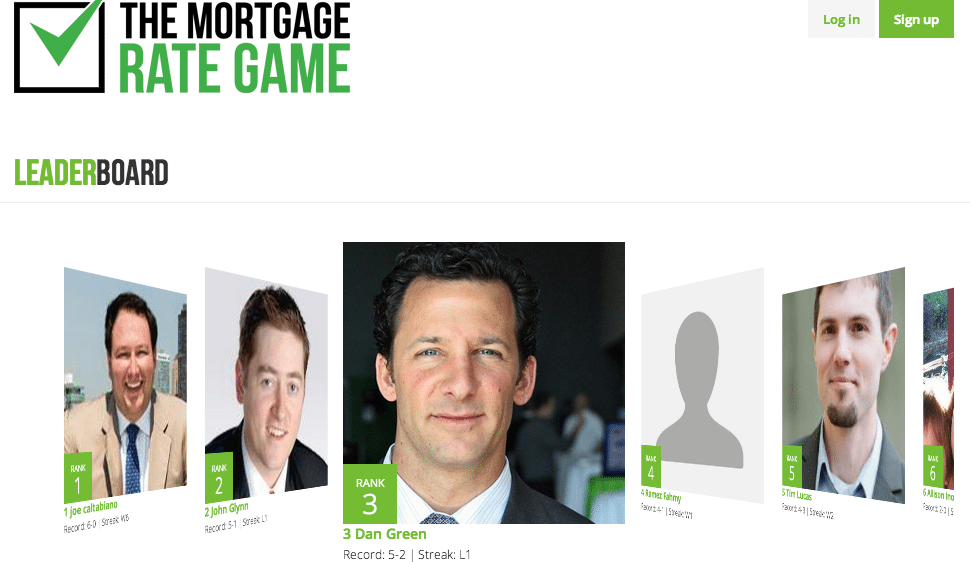 The goal is “to provide consumers and mortgage rate shoppers with real-time mortgage rate forecasting from some of the brightest mortgage minds nationwide,” Green said.

“For years, consumers have had to rely on Wall Street to tell them where mortgage rates are headed next, but Wall Street’s not always right,” he said. “With The Mortgage Rate Game, we expect Main Street to show the world just how much it knows.”

Participants who rack up the best voting records can receive publicity.

They’ll appear prominently on the contest’s page and in quarterly press releases. And they’ll earn badges that can be displayed on newsletters, websites and through social media, potentially offering another whistle that mortgage-whispering real estate agents can slap onto their marketing.

Even contestants with less-than-stellar voting records get visibility on the contest’s “player commentary” page if they supplement their votes with predictions.

Green said he’s been cherry-picking some of the comments to feature in his weekly “What’s next for mortgage rates” posts as well.

Mortgage rates have often behaved unpredictably in the aftermath of the housing crash, whipsawed by investor sentiment and intervention by the Federal Reserve.

When stock markets are roiled by uncertainty, investors looking for a safe place to park their money pump billions into mortgage-backed securities (MBS) guaranteed by Fannie Mae, Freddie Mac and Ginnie Mae. Increased demand pushes MBS prices up and yields down.

The equation is further complicated by the fact that the supply of MBS depends on the number of loans originated.

During the downturn, the Federal Reserve sought to artificially suppress long-term interest rates, including those on mortgages, through “quantitative easing” — buying trillions of dollars worth of Treasurys and MBS.

Quantitative easing (“QE”) helped bring mortgage rates down to historic lows. When the Fed wound down its third round of easing, “QE3,” last fall, many expected mortgage rates would rise.

But continuing global economic uncertainty, tepid production of new mortgages, and other factors have combined to drive down mortgage rates in recent months.

Freddie Mac’s latest lender survey shows rates on 30-year fixed-rate mortgages at their lowest level since May 2013, averaging 3.73 percent with an average of 0.6 point for the week ending Jan. 8, down from 4.51 percent a year ago. 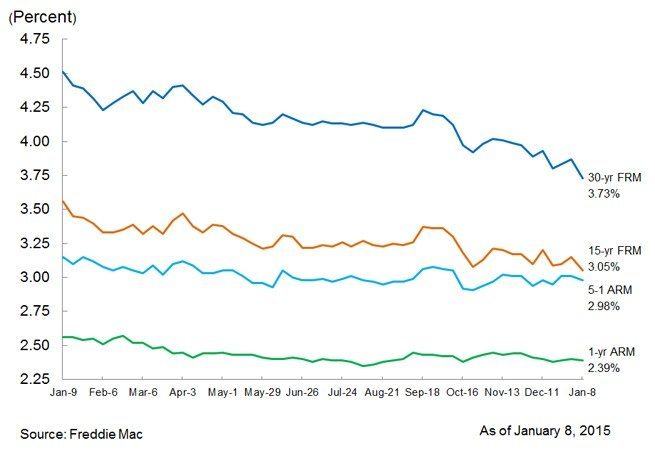 “If falling yields are a reflection of diminishing inflation prospects, as is typically the case, it ought to prompt the Fed to hold off on raising short-term interest rates in the months ahead,” the Wall Street Journal’s Jon Hilsenrath reports. “If, on the other hand, lower long-term rates are a reflection of investors pouring money into U.S. dollar assets, flows that could spark a U.S. asset price boom, it might prompt the Fed to push rates higher sooner or more aggressively than planned.”