Neighborhood demographics have become a major component of the online home shopping experience, but the company that helped pioneer the practice has drastically curtailed the information it makes available to prospective homebuyers.

Zillow’s “demographics” pages, which once showed statistics including “homes with kids,” “age distribution” and “relationship status” down to the neighborhood level, haven’t appeared on the site since at least Oct. 28, when Inman first learned that they were missing.

Zillow says it’s waiting on an updated batch of data. But the prolonged absence of demographic information — at least two months — suggests that the listing portal is not in a big hurry to restore it.

But the absence of demographic data seems out of character for the King Kong of property search, since many real estate websites and apps are hoping to gain a competitive edge by integrating lifestyle considerations into their search experience.

Realogy franchisor Better Homes and Gardens Real Estate, for example, recently claimed to have launched a listing portal that will “forever change the search paradigm” largely because of its use of lifestyle data, including demographic statistics.

Listing search portals Trulia and RealtyTrac and mobile search app fypio are among other services that have sought to set themselves apart by providing a holistic search experience that conveys the flavors of communities, including the makeups of their populations, to consumers.

Redfin went so far as to buy a company, Walk Score, to grab hold of neighborhood data (though that data doesn’t include demographic statistics).

So what’s kept Zillow from restoring a lifestyle-focused aspect of its search experience?

The listing portal’s removal of its demographic data data seems to have coincided with a revamp of its website this fall.

Asked in early November why Zillow had removed demographic data, Zillow spokeswoman Amanda Woolley said that the listing portal is “constantly evolving all aspects of our offering — including our look, feel and functionality — to better meet the needs of consumers.”

Woolley said near the end of November that she couldn’t offer an “exact timeline” on when the listing portal would restore demographic data to its site, “as we are waiting on updated data for those pages.”

Recently, she offered a similar response when asked about the site’s plans for publishing demographic data.

Woolley added that the “when and how” of adding back demographic data is “proprietary.”

If Zillow receives its demographic statistics from a third-party data aggregator, one possibility is that the listing portal has been waiting to receive an updated data set ever since unveiling the new look for its site.

On the other hand, if Zillow mines demographic data itself directly from census surveys, it could be processing the latest set of demographic statistics from the Census Bureau, which were released in early December.

Neither explanation would account for why Zillow chose to pull the old demographic data down altogether, rather than letting it remain as a placeholder on the revamped site.

Maggie McCullough, president of data-mapping firm PolicyMap, says the company is working on integrating the latest census data into its site in the coming weeks.

But in contrast to Zillow, PolicyMap has left up its old demographic data. That’s “so our users can access that data until we replace it with the update,” McCullough said.

Ironically, Zillow continues to feed demographic data to other real estate sites through its GetDemographics API — possibly the only free website plug-in that can pair hyperlocal demographic and market data with real estate listings.

Results.net is an example of one broker website that taps the Zillow API to augment listings with demographic data that Zillow itself has stopped displaying.

Zillow’s GetDemographics API supplies the market and demographic data viewable on the listing pages of the website of Minneapolis-based Re/Max Results.

Another reason that Zillow may not be scrambling to put its neighborhood data back online is that it’s about to acquire the listing portal that may do the best job at providing such data to consumers: Trulia.

Trulia allows users to see listings on maps that overlay demographic data including “married population,” “median age,” “single population” and “population with degree,” to help homebuyers understand the makeup of neighborhoods they might want to live in.

How does he see the Trulia brand as different from Zillow? 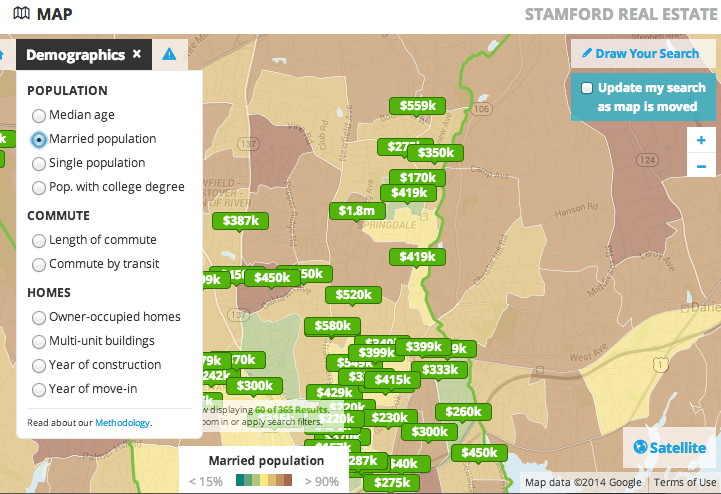 Perhaps Zillow isn’t concerned about losing visitors who are hungry for demographic data because those visitors can find that information on Trulia.

Or maybe Zillow is waiting to get its hands on crime statistics and other data curated by Trulia and use it to roll it into its own neighborhood profiles.

Fair housing rules protect discrimination in housing-related transactions against people on the basis of familial status, as well as race, sex and national origin.

Unlike some other listing sites, including a number powered by real estate brokerages, Zillow never displayed statistics on the racial makeups of neighborhoods — the data that’s received the most attention in the debate around the usefulness of mixing demographic figures with home shopping.

But Zillow, like many others listing sites, did show the percentage of “homes with kids” and “relationship status” at the neighborhood level, which both would seem to convey the “familial status” of areas.

The Department of Housing and Urban Development and the National Fair Housing Alliance have said they were reviewing whether websites and apps displaying demographic information could produce a discriminatory effect on groups protected by fair housing laws (see Inman’s four-part series on neighborhood data for more on the topic).

Two companies that had reportedly caught the eye of the NFHA — NeighborhoodScout and Movoto — told Inman that they never heard from the nonprofit group.

Morgan Williams, general counsel at the NFHA, said the NFHA’s investigation into online real estate services’ use of demographic data is ongoing, but declined to comment further.

So far, Greene said, “The issue has not led HUD to initiate any formal complaint of its own against any real estate-related websites. HUD will continue to review the specific facts of each case in deciding which to pursue formally.”

Nearly 6 out of 10 respondents to an Inman poll think that racial data should not be displayed on real estate search sites. A separate poll found respondents evenly split on whether it’s acceptable to show the percentage of homes with children.