Quest Equity Partners is going all in — managing partner Jay Mehta moved to Boca Raton in October to run the 150-agent luxury brokerage as president and CEO. Zev Freidus, Boca Executive Realty’s founder, has stayed on as broker of record.

Mehta has never been a broker or agent. But as a founding partner of ATC Consulting, he’s coached agents on accountability and business plans.

Mehta said he can’t share details about what Quest Equity Partners saw as the most exciting aspect of Boca Executive Realty’s business model. But the secret explains the company’s unique ability to grow efficiently and quickly, he said.

In the five-year stretch between 2009 and 2013, the brokerage grew its revenue from the previous year by an average of 38 percent, Mehta said. That growth, especially during the downturn, showed him and Quest Equity Partners that the brokerage had a promising model.

Boca Executive Realty currently has seven offices in six cities. Mehta says he and Quest Equity Partners have plans to double that office count in Florida in the next 12 to 18 months. After honing its office-replicating scheme, it will then expand the brokerage both state- and nationwide, he said.

The firm’s technology and intellectual property is worth millions, he said.

Venture capitalists have been pouring a flood of money into tech-focused brokerages like Redfin, Urban Compass and Movoto over the last year.

Redfin, the king of that group, has raised $121 million in the last 14 months. Urban Compass raised $40 million in a Series B round in July that valued the company at $360 million. And Movoto, which was acquired by Tokyo-based Recruit Holdings Company Ltd. a little over a year ago, went on a $20 million nationwide expansion in 2014.

Lead generation was one of the principles Freidus said he used to build his business from a one-man shop in 2006 to the 150 agents the firm has now.

Boca Executive Realty’s lead generation technology was one aspect of the brokerage Mehta said he could talk about.

The firm shows up prominently on search results pages on Google and other search engines thanks to its excellent search engine optimization, especially for terms related to specific areas in the firm’s wheelhouse like specific country clubs, Mehta said. That great SEO gives the firm a leg up with buyers, who account for approximately 70 percent of the firm’s clients, he said.

The website is a great source of business for the firm. Over 55 percent of the firm’s gross sales come from business the company generates from its website, Mehta said.

The firm aims to capture the contact information of most of the consumers who come to its website, bocaexecutiverealty.com. All visitors who want to view property detail pages must establish an account by entering their name, email and phone number.

After consumers complete a couple of searches, the firm matches potential clients with an agent who its algorithm determines will best fit their needs. Every time the lead comes back to the site, they’ll see that agent’s photo and contact info on the home page and listing detail pages. 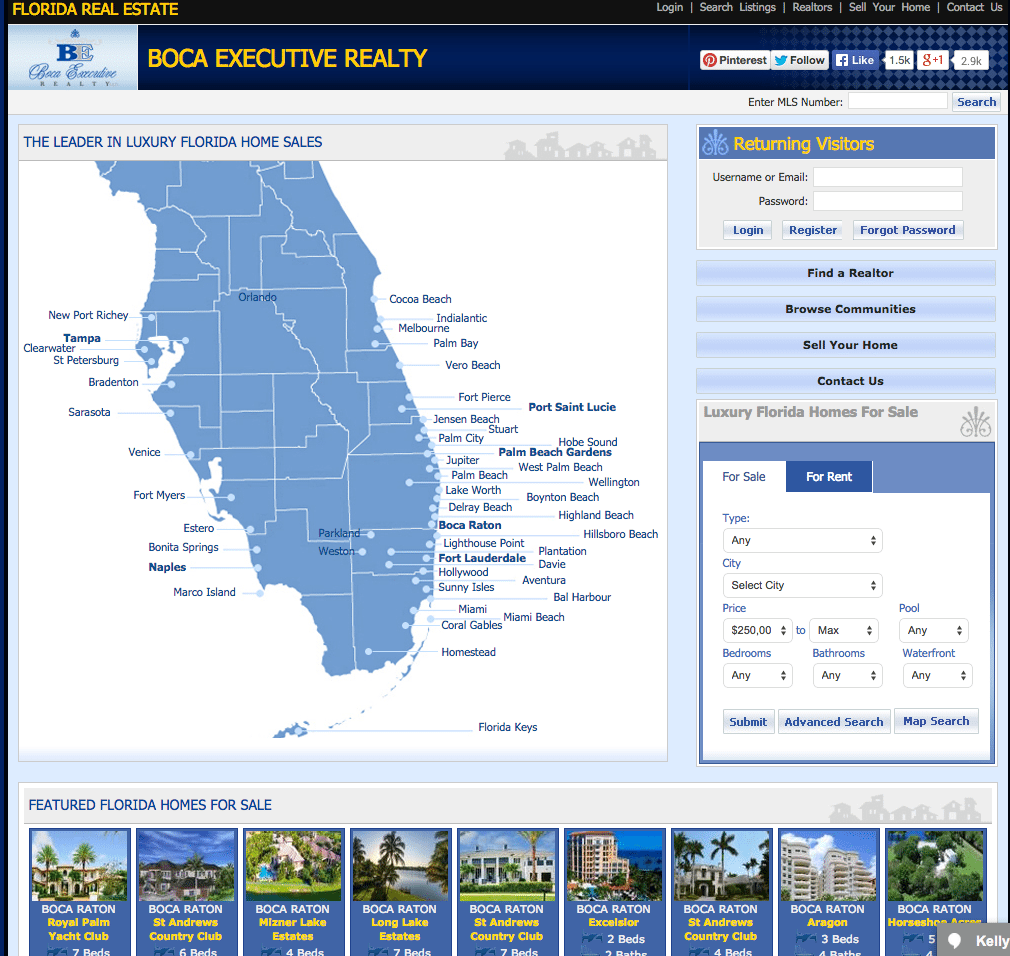 Boca Executive Realty’s website has an old-school look, is not mobile-optimized and doesn’t have a consumer mobile app. The back end is where the firm’s technology really stands out, the brokerage’s president and CEO, Jay Mehta, said.

The site feels a little antiquated compared to those offered by Redfin and Urban Compass, which feature clean, simple layouts on desktop computers and mobile devices and mobile apps. Boca Executive Realty’s site features a constricted desktop design, is not mobile-optimized and does not have a mobile app.

The firm is currently at work on building out a mobile-optimized website, which should be ready by the middle of this year, Mehta said.

Mehta acknowledged that the design of the firm’s website isn’t quite as sleek as those operated by some cutting-edge brokers and portals like Zillow, Trulia and realtor.com. But Boca Executive Realty’s proprietary really shines behind the scenes, he said.

The firm has an all-in-one lead management platform that helps convert prospects into business at a high rate, Mehta said. It also facilitates the sharing of information between agents and sales managers, increasing agent accountability.

Boca Executive Realty’s culture also attracted Quest Equity Partners to the firm. When interviewing agents as part of the due diligence process, Mehta says he was struck by their professionalism and the enthusiasm they had for the firm.

“Our customer is the agent,” Mehta said of Boca Executive Realty.

Agents’ passion for the firm is stoked, in part, by the free leads the firm sends them from its website, Mehta said. In some cases the leads the brokerage sends agents allows them to double their business and they don’t have to pay referral fees for them, he said. In fact, commission splits don’t change at all, he added.

As Boca Executive Realty expands, Mehta thinks it has an advantage over the large portals. Consumers will have access to accurate real estate information about a home as well as ancillary data like demographic info and maps, and the ability to contact an agent right from the listing detail page — and agent hasn’t paid to be appear there.

While the brokerage has been buyer-focused in the past, Mehta said, he wants to build out the listing side of its business as it expands.