Real estate brokerages can’t be all things to all agents, and many of the things that agents value the most cost considerable time and expense to provide.

So brokerages come in many shapes, sizes and flavors — tailored to meeting the varied wants and needs of individual agents.

Not all agents want the same things — some might have no need for an office, preferring to stay mobile and using their home, their car or a cafe as their base of operations.

Agents who are just starting out might be willing to pay extra for leads, training and mentoring that can start them down a road that leads to more referral and repeat business.

But an Inman survey of brokers and agents suggests that regardless of where they choose to put their resources, many companies are failing agents in ways that are almost certain to be hurting everyone’s bottom line. (Click to download full report and charts as PDF file.)

Many agents say that while they value the brand recognition, training and technology provided by their brokerages, their companies are falling down on the job when it comes to generating leads and distributing them fairly among agents.

Agents are fed up with favoritism and hungry for mentoring. They say many brokerages seem too tightly focused on recruiting novice agents — and too tolerant of poorly performing agents — while failing to get the most out the agents they already have.

“We don’t get many leads — management is very concerned about recruiting,” was one typical response.

“We are focused on getting new agents, but not working hard enough to keep the struggling agents we already have,” said another.

“Brokers will hire any agent,” a respondent said. “They need agents in order to be profitable. Agents can leave at the drop of a hat for a better commission split or a better work environment. Therefore, there is no loyalty in either direction.”

Brokers “often forget or leave alone their top-producing agents, assuming they don’t want or need assistance,” said another respondent in the same vein. “That is a mistake!”

Agents also complained of favoritism, policies that seemed to be designed to nickel and dime them, and brokers who treated them like competitors rather than teammates.

One said leads for buyers and listings “all go to the broker, and if he gives you a lead, he wants 50-50 minus what he already gets.”

Another described a “negative environment,” in which “friends of the broker are treated the best and given leads and opportunities.”

“For her own listings she sells both sides of transaction instead of getting me involved to represent the buyer,” another agent reported.

Many survey respondents said they were itching to change brokerages or strike out on their own.

“For the amount of support and technology available, I could do everything online myself, pay less and keep all the profit. Brokers aren’t really necessary any more, especially ones that aren’t fully involved. I would love to hang my license in my own home office instead of someone else’s … one day it will be.”

What brokerages are doing right

When it comes to what brokerages are doing right, brand name recognition was identified by the greatest number of respondents (31 percent) as the single most valuable service their brokerage provides.

Surprisingly few identified buyer leads (7.6 percent) and listings (4 percent) as the most valuable service their brokerage provides. One reason for that appears to be that brokerages are seen as falling down on the job in that area.

Buyer leads and listings both topped the list of valuable services that survey respondents said their brokerage does not provide or could do a better job of providing.

“I butt heads with my broker over the lack of innovation and support for technology of the agent’s choice,” one respondent said. “The company offers various tech solutions; however, those products are inferior to what I prefer to use. Therefore, I pay for myself. In that way, my split is not helping me much.”

“They provide technology, but don’t train us on it,” another survey respondent said. “They allow unethical agents and brokers to perform without accountability.”

“Technology and social media is changing so rapidly, we need more input how to integrate into our daily business and need someone on hand to do it for the top agents,” another complained.

“With a national brand, it is tough because there is no ‘one size fits all’ solution for any technology or situation,” one respondent concluded. “There is no way the company can be everything to everyone.”

While consumers sometimes question whether real estate agents are on their side, the survey showed that ethics and customer service are high priorities.

The one thing survey respondents agreed on the most was that brokerages expect agents to act ethically — more than 9 out of 10 agreed with that statement, with 77 percent agreeing strongly.

Close to 9 out of 10 of those surveyed (89 percent) agreed that their brokerage expects agents to deliver first-rate customer service.

While agents often complain about commission splits — and many brokers try to lure top-performing agents away from competitors by offering them better ones — 71 percent of brokers and agents surveyed felt their brokerage’s commission splits with agents were fair.

Most were also satisfied with the training and technology they are provided, and the guidance they receive on individual transactions.

But two-thirds (68 percent) disagreed that their brokerage was good at generating leads — 41 percent “strongly disagreed” with that statement, and 59 percent did not think that leads were distributed fairly among agents.

Just over half of those surveyed (52 percent) said their brokerage did not provide individual career mentoring.

“I picked them because I thought they would provide training and guidance,” one agent said. “I was told they would when I was hired, but that never happened. I am leaving as soon [as] a deal I have gets to closing.”

Many of those surveyed said their brokerage could do a better job generating and distributing leads. But listings and buyer leads were seen as less important services than training, technology and a good working environment.

Other services that were highly valued by agents included guidance on individual transactions, career mentoring and brand name recognition.

Asked to put in their own words their brokerage’s biggest shortcoming, poor management, short staffing, technology and training were frequently mentioned.

Asked to explain in their own words why they were working at their chosen brokerage, instead of a competitor, many discussed the company’s name recognition, brand, culture, support, ethics and reputation.

But others said they are where they are largely because they’re afraid to make a change.

Several said the proximity of the brokerage’s office to their home was the biggest attraction.

“All the companies in our area make promises and don’t deliver,” said one such respondent. “I went in knowing this was a new franchise and I wanted an office and not work from home. They had many weakness and didn’t compare to the company I was leaving. The distance in commute for me was a big influence. You just need to know you have to pick up the slack and do your business. No company is going to do it for you.”

While agents didn’t see listings and buyer leads as one of the most important services their brokerage provides, 53 percent said the chance to get more of them would prompt them to leave for a competitor. Nearly half (42 percent) said better commission splits would entice them to leave.

But fewer said they could be lured away by better technology (32 percent), a better working environment (27 percent), or a better brand and name recognition (20 percent).

Asked about the most likely areas of conflict between agents and brokers, many survey respondents complained of favoritism, fees and a lack of communication.

“If [the] broker is listing and selling, that is the biggest area of conflict. The broker thinks they own the listings and the business. Today’s agent sees it differently.”

“Fees. Actually, even our broker comments and apologizes to us about all the fees. Desk, franchise, copying, training. At least we aren’t being charged on a per-use of the ladies’ room. Yet.”

“Agents want brokers to hand work to them without putting in effort of their own, and expect the brokerage to run at zero profit. ”

“Brokers expectation that agents will treat leads as if they are valuable. Agents desire to have a higher split of the commission.”

“Commissions and lack of a clearly articulated, visionary direction for the company. If all I’m getting is a traditional brokerage environment without a focus on radical innovation, then I’ll simply move to a low-cost 100 percent company.”

“Decisions are made at the top of the corporate ladder without regard to valuable input from agents on the ground.”

“Commission splits and how managers get paid on sales and also ask for referral fees. They use their agents to just sell their mortgage product.”

How could the interests of agents and brokers be better aligned? Instead of a constant pursuit of new bodies to fill chairs, survey respondents saw opportunities for mutually beneficial investments in training, tools and technology for existing agents.

“Recognize that [the] agent IS the business. [The] agent is so busy out there juggling leads and deals, [the] broker needs to be the one looking forward, anticipating turns, bumps in the road. They should be helping to pave the way and prepare the agent for what lies ahead.”

“Brokers feel the need to hire as many agents as they can hoping to keep a few. Instead, they should hire a few strong working agents and train them to be star agents!”

“Brokers need to focus on the agents that have chosen to be with them instead of always focusing on their next recruit. Provide tools and technology that is actually of value to the agents — not things the broker thinks would be good. Pay attention to what your loyal agents are telling you.”

“Brokers should spend more on hiring accomplished professionals to support agents in all aspects of marketing and lead gen, but agents have to be willing to offset this added cost to the company by accepting reduced commission splits or paying higher fees.”

“We have focus groups spearheaded by agents from all over our footprint to help give recommendations to our leadership. The leadership take these groups very seriously and consider every recommendation.” 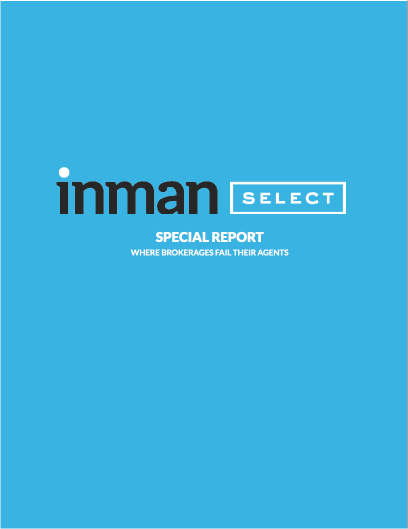