Cloud-based brokerage eXp Realty International Corp. is in the black for the first time since launching five years ago, with the 530 agents affiliated with the company generating $13.4 million in 2014 revenue, up 25 percent from a year ago.

In its annual report to investors, eXp Realty characterized itself as “one of the fastest-growing real estate brokerages in the United States,” having added 180 agents last year. Having just entered Tennessee, the company now boasts agents in 30 states plus Alberta and Ontario, Canada.

Although eXp Realty’s principal corporate office in Bellingham, Washington, has approximately 900 square feet of space, it’s used only for administrative and finance operations.

Brokers and agents work “in the cloud,” using Internet-based software and communication tools. In March, eXp said it transferred “all of its agents, brokers and staff into a new campus-style, cloud office environment which is significantly larger than the company’s previous environments,” providing increased capacity to accommodate growth.

The cloud office environment will also host networking, training, education and professional development classes, seminars and events as part of the company’s RE Tech Campus initiative, overseen by Brad Andersohn, former director of the “Zillow Academy” for agents.

The platform enables the brokerage to harness and aggregate data from 70 multiple listing services “in a more centralized yet farther-reaching manner, effectively syndicating data across [an] increased numbers of channels,” the company said in its annual report.

A recently launched “Making it Rain” lead generation program provides leads for company agents and brokers at up to a 75 percent discount compared to popular third-party listing portals like Zillow, Truila and realtor.com, the company said.

Agents pay a minimum of $100 per month to join the program. In return, eXp markets their branded eXp Realty search portal or another website of their choosing, employing search engine marketing, Facebook ad campaigns, Craigslist and other channels.

The brokerage’s consumer-facing website, exprealty.com, boasts that the company is “the agent-owned cloud brokerage.”

Instead of royalty or franchise fees, agents pay 20 percent of their gross commissions, up to a maximum of $16,000 for agents who have been with the company for at least a year. Agents can also earn residuals on gross commission income generated by agents and brokers they recruit to the company.

Qualifying agents are eligible for awards of company common stock when they hit production and agent recruiting goals. This year the company plans to institute a direct purchase plan that will allow agents and brokers to set aside a percentage of commission or revenue sharing dollars toward the purchase of discounted company common stock.

As noted in the company’s annual report, shares in eXp are traded in an over-the-counter market where trading is “frequently thin and highly volatile.”

So far, the company has issued 48.5 million shares — CEO Glenn Sanford owns about 41 percent of them — and is authorized to issue 7.65 billion more. 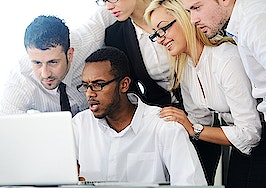 What the disruptive real estate brokerage will look like 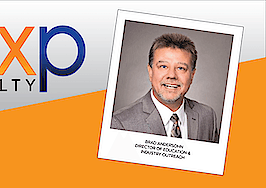 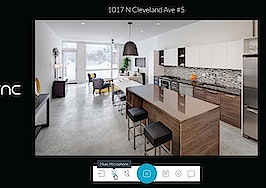 Real estate websites will soon be hosting 'virtual open houses'
Back to top
Only 3 days left to register for Inman Connect Las Vegas before prices go up! Don't miss the premier event for real estate pros.Register Now ×
Limited Time Offer: Get 1 year of Inman Select for $199SUBSCRIBE×
Inmanpot
Log in
If you created your account with Google or Facebook
Don't have an account?
Create an Account
Forgot your password?
No Problem