Long-term rates rose this week — not a lot, but summer rates have not been able to penetrate the lows revisited in October. I would say that confusion about the future course deepened, but it can’t get any deeper. Long rates rose a little after the Fed’s meeting broke on Wednesday and it issued another tortured statement, but the rate-spike was the next day.

Long-term rates rose this week — not a lot, but summer rates have not been able to penetrate the lows revisited in October. I would say that confusion about the future course deepened, but it can’t get any deeper.

Long rates rose a little after the Fed’s meeting broke on Wednesday and it issued another tortured statement, but the rate-spike was the next day, reacting to a third-quarter (Q3) GDP (gross domestic product) report better than expected. Maybe it was.

In the old story, a person caught by a spouse in bed with someone other than the spouse says, “Are you going to believe me, or your lyin’ eyes?”

The “advance” Q3 number, to be revised: 1.5 percent growth, roughly as expected and unimpressive. However, consumer spending improved a good trend, up 3.2 percent, and had it not been for falling inventories overall GDP would have grown about 3.0 percent.

I would say that confusion about the future course deepened, but it can’t get any deeper.

This inventory business should always be short-term back-averaged to find trend. Q2 GDP was 3.9 percent, inclusive of an inventory build which unwound in Q3, six-month net GDP running just above 2 percent. The same thing happens with trade figures: if consumers buy the products of other nations, our GDP looks soft but the economy itself is okay.

On Thursday, the bond market was spooked by that strong consumer spending and another internal element of the GDP report. The Bureau of Economic Analysis said that real disposable personal income in Q3 rose by 3.5 percent compared to a 1.2 percent gain in Q2. Uh-oh. The only reason the Fed has held back from liftoff has been dead incomes. If they are rising, the wolf really is at the door.

Today, from the same BEA: in Q3, wages grew by 0.2 percent, the lowest quarter since 1982. The Employment Cost Index, inclusive of labor costs beyond wages, rose only 0.6 percent, year-over-year 2.1 percent. September personal income decelerated to 0.1 percent growth. Where is the income to support this allegedly strong consumer?

Or the rising prices, if the consumer is spending beyond production? The Q3 personal consumption expenditure GDP deflator (apologies — the Fed’s favorite, “deflates” nominal GDP to an after-inflation figure) was 1.2 percent, and in September decelerated to 0.1 percent — not a hell of a lot more than half of the Fed’s target.

Confirmations from other data? Orders for durable goods tanked, September down .4 percent, and August revised down from zero to minus 0.9 percent, probably related to a strong dollar.

Housing data is okay, but slowing in both volume and price gains. Housing data sources are unreliable, but there is no inflation to be feared from home prices rising somewhere between 3 percent and 5 percent, depending on the estimator. Rising prices and low inventory should encourage construction, but it’s still slow relative to pent-up demand, except for apartments.

Back to the Fed. Post-meeting statements began under Greenspan in February 1994, over his objection. Previously, the Fed announced policy changes only by the actions of its traders — you figure out what we have in mind. That first post-meeting statement was 99 words; on Wednesday the Fed issued 515, murky and pointless rambling.

Strunk & White, The Elements of Style: “Vigorous writing is concise. Remove unnecessary words.” I should send my Dad’s tattered copy to Yellen.

On Wednesday, the Fed took out the only worthwhile sentence from the prior meeting’s statement: “Recent global economic and financial developments may restrain economic activity somewhat and are likely to put further downward pressure on inflation in the near term.” Any economic observer knows that the world outside the U.S. is in trouble and exerting deflationary pressure here. What, that no longer matters?

I like Yellen — always have — and respect many of her colleagues. The Fed is divided into three camps: hawk, dove, and not sure — and the camps are farther apart than any time in my memory.

They are on the edge of screwing this up. If the economy continues at its current pace, the risks of tightening far outweigh the risks of not. And if the economy decelerates as it appeared August-September, they and all of this “Wolf!” will look silly. And that’s unfortunate for all of us. Either way.

Here’s the first-ever post-meeting statement in February 1994 (by the way, followed by the most extreme tightening since 1981, which you’d never guess from this statement). 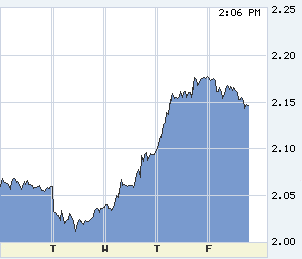 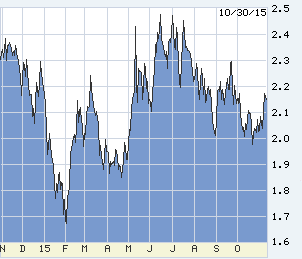 Ten-year T-note in the last year. 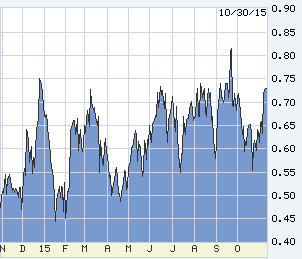 Fed-predicting 2-year T-note in the last year. These traders are not stupid, so yields rose after the Fed’s latest wolf cry, but they’ve priced-in perhaps one hike in the next two years.

Were it not for the rest of the world’s self-entanglement, the US would be rocking
Back to top
Only 3 days left to register for Inman Connect Las Vegas before prices go up! Don't miss the premier event for real estate pros.Register Now ×
Limited Time Offer: Get 1 year of Inman Select for $199SUBSCRIBE×
Inmanpot
Log in
If you created your account with Google or Facebook
Don't have an account?
Create an Account
Forgot your password?
No Problem