This may be the incentive real estate developers need to renovate and build housing that more low- and moderate-income households can afford.

Department of Housing and Urban Development (HUD) Secretary Julián Castro announced the plan on Jan. 29 during a visit to an affordable housing complex in Columbus, Ohio.

Upping the incentives for renovations and new units

“Families across the country are struggling through an affordable housing crisis,” Castro said. “By reducing our rates, this administration is taking a significant step to encourage the preservation and development of affordable and energy efficient housing in communities large and small. This way, hard-working families won’t have to make the false choice between quality or affordable housing.”

For housing classified as “broadly affordable,” most of which is under Section 8 contract and/or covered by Low Income Housing Tax Credit (LIHTC) affordability requirements, annual rates will be lowered to 25 basis points, a reduction of 20 or 25 basis points from current rates.

For energy-efficient properties, or those committed to industry-recognized green building standards, the FHA is lowering annual rates to 25 basis points, a reduction of 20 to 45 basis points.

To ensure that the broadly affordable and energy-efficient properties benefit directly from the lower rates, FHA will limit the fees that can be charged on these loans. Multifamily insurance rates for market-rate properties that are not energy efficient will remain unchanged.

FHA is also reducing upfront premiums to support its affordable housing and energy efficiency goals and to streamline the premium structure.

Upfront premiums for market rate properties that are not energy-efficient will remain unchanged.

According to the FHA, the rate reductions are expected to spur the rehabilitation of an additional 12,000 units of affordable housing per year nationally, and nearly 40,000 families will benefit from higher-quality and affordable housing over the next three years.

Castro’s announcement came on the heels of a Harvard University Joint Center for Housing Studies (JCHS) report, “America’s Rental Housing,” which concluded that nearly half of the new rental units constructed in 2013 catered to the upper end of the income spectrum.

In a follow-up post on the JCHS Housing Perspectives blog, Irene Lew, a research assistant at the center, suggested that federal and local government intervention was needed to offer publicly owned land at reduced or not cost to developers, particularly in pricey metro areas like Washington, D.C.

However, Lew also noted that Congressional appropriations for government programs like the HOME Investment Partnerships Program, or HOME, lag behind levels set aside for such programs a decade ago.

“Indeed, the strained fiscal climate may continue limit the availability of subsidies that make it economically feasible for both for-profit and nonprofit developers to build affordable rental housing,” Lew concluded. 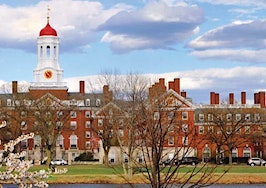 2016 Housing Market Trends & Forecasts
Back to top
Only 3 days left to register for Inman Connect Las Vegas before prices go up! Don't miss the premier event for real estate pros.Register Now ×
Limited Time Offer: Get 1 year of Inman Select for $199SUBSCRIBE×
Inmanpot
Log in
If you created your account with Google or Facebook
Don't have an account?
Create an Account
Forgot your password?
No Problem