For decades real estate professionals have been the butt of jokes, satires and the sometimes stars on reality television shows that do more to demean the business than to provide an accurate picture of the hard working professionals and the excellent service they provide. On May 20, 2016, “Undercover Boss” will air the first in-depth look at what the day-to-day real estate business is really like.

For decades real estate professionals have been the butt of jokes, satires and the sometimes stars on reality television shows that do more to demean the business than to provide an accurate picture of the hard working professionals and the excellent service they provide.

On May 20, 2016, “Undercover Boss” will air the first in-depth look at what the day-to-day real estate business is really like.

The program showcases real estate professionals and illustrates the commitment and dedication they bring to doing the best possible job for their clients.

If you haven’t seen “Undercover Boss,” the show’s talented staff disguise a CEO and then send that person out to experience what is going on in the trenches in his or her company. To that end, the show often places the CEO in an entry-level position and then allows the story to unfold from there.

For example, one CEO was fired from a maintenance crew because he was too slow at picking up the garbage.

The focus of “Modern Family” is more on the intra-family dynamics than on the real estate industry — and it’s a sitcom. Phil Dunphy is a great guy, terrific dad and loving husband who just happens to be a real estate agent.

How do you disguise a CEO who is 6-feet-7-inches tall?

“Undercover Boss” recently approached Dan Duffy, the CEO of United Real Estate Group, about doing a show that would reveal what working in the real estate industry is actually like. You must be invited to audition; a company cannot buy its way on to the show. Furthermore, even if you are given a chance to audition, the show rejects the vast majority of the CEOs that they interview.

Once Duffy made the cut, he was sent to a makeup artist to create his disguise. The makeup department made a hairpiece for him, had him grow out his beard and then dyed it. They also dressed him in tie-dye.

The show takes extreme care to avoid having show participants figure out what exactly is happening. In Duffy’s case, he knew which airport they flew him into, but then the show’s producers would drive him three hours from the airport. He had no idea where they were taking him. Also, he didn’t know what role he was to play until just a few minutes before they began filming.

Because the people from the company involved have no control over the process, the true personality of the CEO and the company becomes apparent as they film the show.

The mass media has done the industry a disservice

Duffy said that he has always had a high appreciation for the people who work in the industry and an even higher regard for what they do. Furthermore, he believes professional real estate agents seldom receive enough credit for how hard they work.

Duffy was excited about the opportunity for several reasons. First, it would be the first time ever that a national show featured a real estate company with the goal of showing what the real estate business is really like.

Second, the show would provide him with the opportunity to see if the culture as well as the guiding principles and values upon which Duffy founded his company is being preserved during a period of rapid expansion.

Third, Duffy felt the show was really about the entire industry and correcting the common misperceptions of what the business requires.

“The industry doesn’t always get the best rap. This show allows the world to see how hard we work to create great outcomes for our clients and to earn our commissions,” Duffy said.

“I have always felt that real estate agents work extremely hard to close their transactions and that they deeply care about what they do. This show exposes the challenges they face every day in the business. For the first time on national television, people can see the real estate industry as it actually is.”

When asked if he would do the show again, Duffy replied: “I haven’t seen the show, so I will be watching it for the first time with everyone else. I probably embarrassed myself, but I would definitely do it all over again.

“The experience served to confirm what we’re doing right as well as where there is room for improvement. I’m excited we did the show, and I hope we did a good job showing how hard the people in our industry work.” 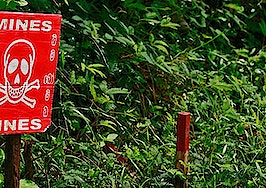 How (and why) to set 'big, hairy, audacious' goals