The United States has still not fully recovered from the housing crash nearly a decade ago, according to Zillow.

The national negative equity has steadily been dropping since it peaked at 31.4 percent in 2012, with the most recent data provided by Zillow showing that it currently sits at 12.7 percent.

Negative equity was, at one point, reaching catastrophic levels following the burst of the bubble. This situation occurs when the homeowner owes more money on the house than it is worth. Although some areas — hot pockets, if you will — of the U.S. have rebounded in surprising ways.

San Francisco and San Jose are the two strongest large metro markets. Astoundingly, these are also the two markets that have a negative equity of less than 5 percent and home values that are actually exceeding the values pre-bubble. 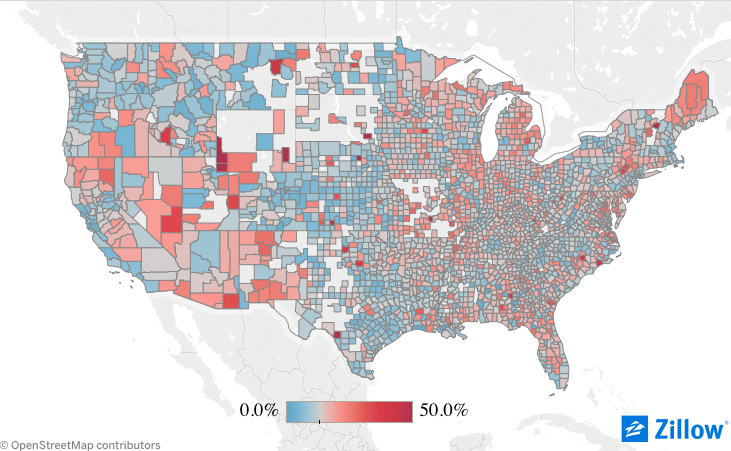 The attribution of success in these markets falls on the fundamentals of market growth. San Francisco and San Jose experienced a significant boost in the job market with the tech-boom.

Demand of homes skyrocketed, pushing home values up and creating a competitive market. Combine this with the prospect of a high-paying job — one that allows someone to afford your $1.25 million condo — and you’ve got a recipe for strong growth.

Los Angeles is nipping at the heels of San Francisco by staying under the 10 percent mark at 7.2 percent negative equity.

This didn’t happen everywhere, though. As Zillow points out, in the first quarter of 2016, negative equity has hit the hardest and lasted the longest in the middle of the country.

Houston, on the other hand. has managed to maintain a low negative equity, perhaps due to the housing and job market growth it has experienced in the past few years. Negative equity in the three counties that make up Houston averages right around 6.4 percent.

Chicago has felt the effects the longer than metros on out west. During the crash, homes in the midwest did not lose value the same way they did in the booming southeast and southwest regions. In regions where sunny skies and blue oceans were just one subprime mortgage away, the numbers are much more dramatic and immediate. But in states like Illinois, Ohio, Michigan and Pennsylvania, the problems remain.

Chicago’s negative equity peaked at 41.1 percent and currently has the highest negative equity of any large metro in America at 20.3 percent. This means that 1 out of every 5 people who have a mortgage currently owe more on the mortgage balance than the home is worth, or do not have the equity needed to sell the home and comfortably relocate to a comparable home. 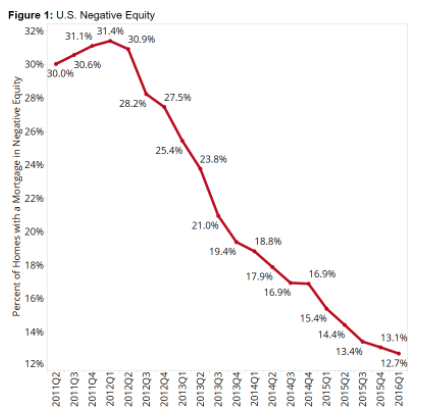 Baltimore has the third-highest negative equity rate at 17.2 percent.

Since people were not flocking to these markets for their cheap homes, warm weather and promises of job sustainability, new construction was not seeing the same boom that regions like Phoenix and Miami saw during the rush.

When the job market tanked in 2007, these warm-weather markets completely lost value in the homes.

At one point, almost half of Miami’s residents were underwater on their homes. This could be attributed to multiple factors, but with home values dropping and a populace that purchased these homes with little to no down payment, residents began paying into negative equity. However, Miami’s median home value has increased 62.7 percent.

Housing recovery not so bright for entry-level buyers, says FNC