New construction in New York might be a hot topic in development and investor circles, but the real meat and potatoes for agents and clients is in Manhattan’s hot resale market. According to data released from Brown Harris Stevens (BHS), average sale price for apartments in Manhattan has climbed double digits since last year.

New construction in New York might be a hot topic in development and investor circles, but the real meat and potatoes for agents and clients is in Manhattan’s hot resale market. According to data released from Brown Harris Stevens (BHS), average sale price for apartments in Manhattan has climbed double digits since last year.

Although apartments sold in the second quarter actually stayed on the market for more days than last year (88-day average, up 6 percent from 2015), the median price set a record high of $950,000. This is due to the low inventory in the area, the report says, and the high demand for studio and one-bedroom units.

“Much of the new inventory coming on the market are more condos positioned for the higher income buyer looking for larger units,” said Charles L. Ruoff, licensed associated broker at BHS. “The smaller apartments were not constructed as they did not meet the financial objectives of the developer. The sales market was skewed, and the studio and one-bedroom buyers had fewer options, which drove up pricing.”

With an increase in demand comes the advantage to the seller: On average, buyers paid 98.2 percent of the asking price, down only one basis point from the first quarter of 2016, and down 13 basis points since 2015’s third quarter peak of 99.5 percent. Also, 10 percent fewer closings happened in the second quarter against last year’s numbers. 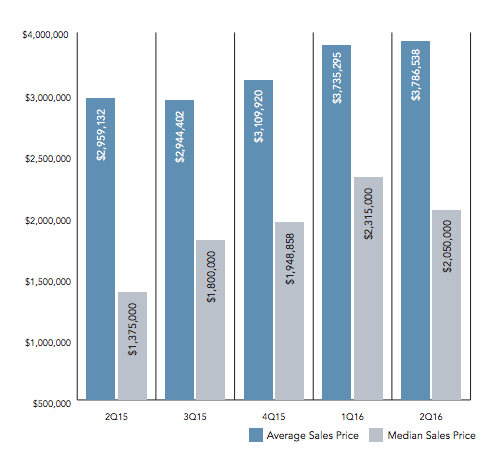 Resales are the new black

“We need to continue educate our customers to look closely at the many sub-markets that make up the City. Working with a knowledgeable agent who knows what constitutes a viable comparable sale is more important than ever,” Hall F. Willkie, president of BHS residential sales, said in a press release.

Of all the resales in the second quarter of 2016, the Eastside (59th Street to 96th Street, Fifth Avenue to the East River) comprised 21.8 percent. The median price of apartments rose just 1 percent over the year to $3,825,000. Median prices rose in every category of apartments except two-bedrooms.

Manhattan resales are the new black during Q2

In the area of 34th Street to 59th Street and the East River to the Hudson River, also known as Midtown, median studio prices jumped 19 percent year-over-year. Midtown held 20.4 percent of total resales in Manhattan, and the median price for studios reached $485,000.

In the downtown area between 34th and 14th Streets, half of all sales were attributed to one-bedroom apartments, which had a 17 percent increase in median price to $960,000. Of all resales on the island, only 12.9 percent were in this area.

In the downtown area south of 14th Street, median prices rose in every category of apartments. Overall sales in this area accounted for 19.2 percent of resales.

Upper Manhattan (North of 96th Street on the East Side, 110th Street on the West Side) only held a 7.8 percent stake of resales. Median price of studios and one-bedrooms increased the most out of the four apartment categories at 15 percent and 9 percent, respectively. 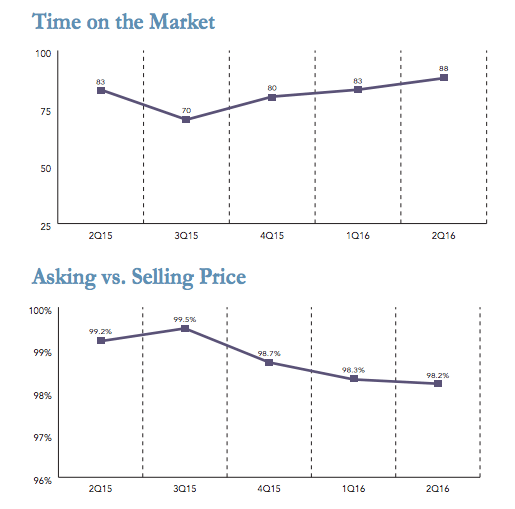 DOM and sale price data of cooperatives and condos in Manhattan.

The 20 most expensive places to rent in the US