Foreign investment of U.S. real estate is slowing, but not all markets are created equally.

According to the recent 2016 Profile of International Activity in U.S. Residential Real Estate from the National Association of Realtors, slow economic growth in countries throughout the world has put a damper on foreign investment in American real estate.

Foreign investment of U.S. real estate is slowing, but not all markets are created equally.

According to the recent 2016 Profile of International Activity in U.S. Residential Real Estate from the National Association of Realtors, slow economic growth in countries throughout the world has put a damper on foreign investment in American real estate.

The majority (51 percent) of total residences purchased by foreign investors were concentrated in five states: Florida (22 percent), California (15 percent), Texas (10 percent), Arizona (4 percent) and New York (4 percent). Those buyers are typically coming from China, Canada, India, the United Kingdom and Mexico, according to the report.

During a 12-month period from April 2015 to March 2016, foreign buyers bought a total of $102.6 billion of U.S. residential property, the report says. This marks an annual fall from the previous year’s $103.9 billion. Primarily, 72 percent non-resident foreign buyers are purchasing properties in the U.S. as a vacation home or rental home. 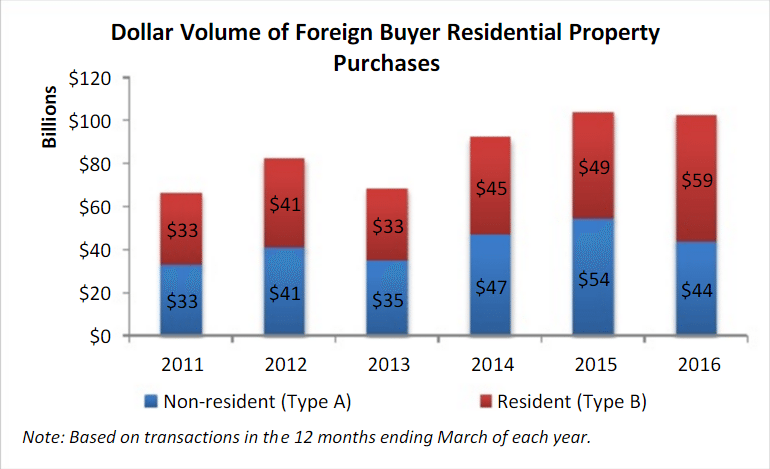 Where are foreign buyers finding a nest?

Despite Florida having a consistently high share of international sales, the Sunshine State has seen its numbers fall in the past five years. In 2011, there was a share of 31 percent of foreign buyers, and that figure has fallen to 22 percent after a 1 percent increase over 2015.

Latin American and Caribbean buyers make up the largest pool of foreign buyers in Florida, at 36 percent. Another 25 percent hail from Europe, and 21 percent are from Africa. 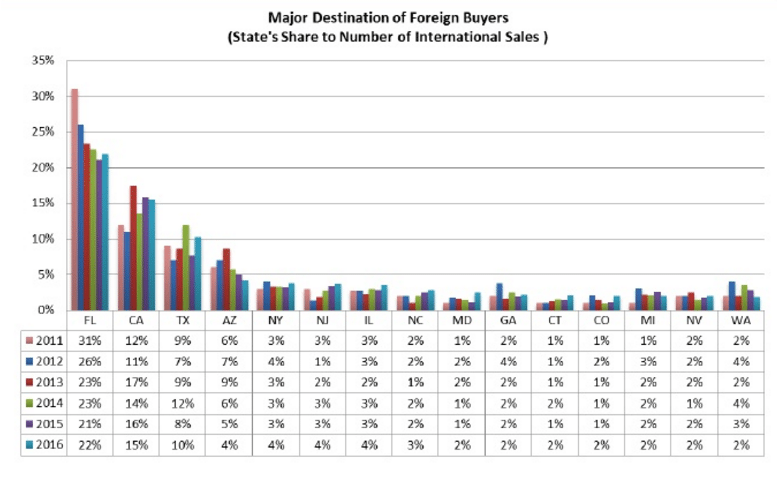 In that same five-year period, California saw an overall increase from 12 percent to 15 percent foreign buyers. California saw its highest share of international buyers in 2013, at 17 percent. The state saw 51 percent of its buyers come from Asia/Oceania, which was by far the majority. The second-largest origin percentage was Europe, taking 15 percent of the pool.

22 percent of foreign buyers flock to the Sunshine State

From China, the majority of buyers go to California. Thirty-two percent of buyers from China look to the Golden State, while 10 percent go to New York, 8 percent to Texas, 6 percent to Washington and 5 percent to Jersey.

While the majority of buyers from India found a place in Texas, the spread was a bit more even in this group. Texas took 20 percent of the pool, California 17 percent, New Jersey 11 percent and Louisiana and Illinois both took 6 percent each. 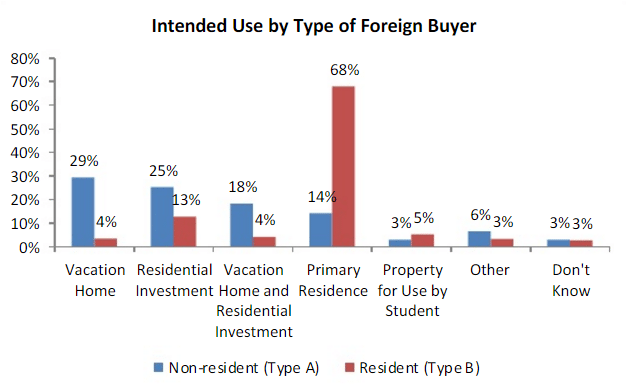 NAR also polled members on their experiences working with foreign buyers, with 44 percent of members believing the next 12 months will be promising. Only 10 percent expected to see a dip in working with international clients, and 29 percent believe there won’t be much of a change. However, it’s important to note that the survey closed prior to the Brexit referendum.

Construction starts dip as mortgage rates surged in April
Back to top
Navigate real estate's new frontier at Inman Connect Las Vegas. Register with your Select subscriber discount for an extra $100 off!Learn more×
Limited Time Offer: Get 1 year of Inman Select for $199SUBSCRIBE×
Inmanpot
Log in
If you created your account with Google or Facebook
Don't have an account?
Create an Account
Forgot your password?
No Problem