I bought a house at the end of February, and I still can’t decide whether it was the smartest or stupidest thing I’ve ever done. And I intentionally immerse myself in real estate every day, trying to learn more about the ins and outs — and the global economies that drive this industry. If I’m this confused, you can imagine how some consumers who don’t have a foundation in real estate might be feeling today. On Friday, the news that the citizens of the United Kingdom (UK) had voted to leave the European Union (EU) — a “British exit,” abbreviated as “Brexit” — almost broke the internet.

I bought a house at the end of February, and I still can’t decide whether it was the smartest or stupidest thing I’ve ever done. And I intentionally immerse myself in real estate every day, trying to learn more about the ins and outs — and the global economies that drive this industry.

If I’m this confused, you can imagine how some consumers who don’t have a foundation in real estate might be feeling today.

On Friday, the news that the citizens of the United Kingdom (UK) had voted to leave the European Union (EU) — a “British exit,” abbreviated as “Brexit” — almost broke the internet.

Now it’s Monday, the planet has had the weekend to think about Brexit … and there’s still a lot of swirl and confusion as everyone tries to figure out what it means.

Here are some thoughts from various real estate experts.

Will higher price points be in trouble?

One agent on Inman Coast to Coast, Tracy Freeman, noticed an anecdotal drop in attention paid to high-end listings this weekend.

“Our office averages 20 open houses a weekend, usually good turnout across all price points,” wrote Freeman. “This weekend things were very skewed.” She noted that properties priced between $400,000 and $600,000 had open houses that were well-attended, with about 15 groups of visitors per house and offers pending.

That picture changed as the price rose. Properties priced between $1 million and $1.5 million “were basically dead,” Freeman wrote. “Agents are theorizing that Brexit may be a factor. Whether it was or not, we don’t know yet.”

Matthew Gardner, Windermere’s chief economist, believes it’s too early to say what effect Brexit might be having — and that it’s likely to vary by location, too.

“Ultimately, I would not be surprised to see the ultra-luxury market, which has already started to see some tapering, continue,” he said. “That environment, it’s rarified air and it does tend to be excessively influenced by global economic shifts.

“This is going to be a very dirty, very ugly divorce; it’s going to take a very long time and leave a lot of people crying,” he added. “These things never end up well.”

Was this what the UK property market needed?

Tim Hammond, the CEO of UK-based buyerprice.com, which is making inroads in the U.S., posits that Brexit might actually be a good thing — for everyone.

“Could this, weirdly, be exactly what the UK property market actually needs?” he asked in an emailed statement. “We know that there has for some years been a massive imbalance of demand over supply. That’s not going to go away. However, it could be moderated as more people, worried about the future of the housing market, will come to market. Let’s say 20 percent more. And let’s assume that 20 percent fewer people buy for the same reason.

“This 40 percent rebalance might just give the market the lubrication it needs for more transactions to take place. In the process prices could, of course, lose their shine, which would inevitably help first-time buyers get on the ladder,” Hammond added.

“London was amongst the world’s most lucrative real estate markets; however, last week’s UK vote is already causing property prices to plunge, which means that Florida real estate will likely move up the list of busiest global investment destinations,” said Daniel Kodsi, CEO of Paramount Miami Worldcenter, in a statement. “We expect Great Britain’s vote to exit the European Union will further increase the flow of foreign capital pouring into Florida real estate, which continues to be one of the hottest and most stable investments in the world…Brexit adds a new dimension to the global real estate investment landscape, which will take time to fully understand but may, with near immediacy, trigger a surge in additional foreign investment in Florida.”

“It’s going to be a flight to safety, and that’s applicable in a number of different ways,” said Gardner, who points out that the actual British exit from the EU won’t happen for several years — the process will take two years from the point in time that the British government enacts Article 50 of the listing treaty, which hasn’t yet happened and probably won’t for a few more months. “So we’re talking several years,” Gardner pointed out, “and who knows what’s going to happen in that time?”

“Brexit is likely going to hurt every global market except Manhattan real estate,” said Michael Rossi, CEO at Elegran in New York. “NYC and London luxury real estate have been twin pillars of stability for foreign investment, but I foresee the sudden volatility in British markets causing Asian and Middle Eastern wealth to look across the pond towards New York City.”

In Inman’s Broker War Room, broker Keelan McCamey noted that some locales might not see any changes — because the market is just too hot.

“In Denver, our story at the moment continues to be one of local supply/demand over any global issues,” McCamey wrote. “With over 100,000 new people moving here annually, our inventory at 25 percent of what’s considered a ‘balanced’ market, some of the highest appreciation rates in the country, and the fact that the current market is built on good credit buyers (and not what we had prior to the last downturn with subprime), I’d gather we’re somewhat insulated from Brexit. We’re building our market on qualified buyers. Tech, telecommunications and energy are big on hiring now.

“I’ve heard so many economists get things wrong over the years, so I tend to stick to more of a local view of what’s happening rather than the overall global picture, for better or worse. I have no idea where things are going economically, yet if I had to guess (like all economists do) I’d say we’re going to continue our market strength until we see an inventory buildup again. Our foreclosures are low as a percentage of the market, so most buyers are staying in their homes.”

Will there be a recession?

“When there’s too much smoke, people get paralyzed with fear,” said Gardner. “To see the fairly temporary hemorrhaging in U.S. equity markets that we saw on Friday — certainly. Today we’re down almost 300 points — again, not surprising — because no one knows for sure what the effect is going to be. However, do I think it’s temporary? Yes.”

Gardner said that, big-picture, he expects “Brexit” to act as “a bit of an anchor to U.S. economic growth,” but he doesn’t believe it will throw the country into a recession. In fact, he expects that the “flight to safety” means that U.S. Treasurys will be considered a safe haven — and this will have an effect on the residential real estate market because mortgage rates track to the 10-year Treasury rate. “We see the 10-year Treasury down a point and a half, so expect to see mortgage rates trend lower,” Gardner said. “I think we’ll see a big bump in refinance activity and also allow people to buy more house at a lower rate.”

However, this doesn’t mean that the U.S. housing market has suddenly been saved — not by a long shot. Many U.S. citizens and metro areas are already struggling with affordability issues, and potential increased interest from overseas investors could exacerbate price hikes, especially in big cities where investors tend to flock.

“Affordability trumps any other concern,” Gardner noted. “It’s something that, right now, scares me quite frankly to death. We are in a situation with borrowing rates being as low as they are, we’ve seen a clear price recovery from a recession, but we haven’t seen incomes go up to match or even come close to home price growth. What happens if you see a jump in interest rates?

“The home price growth cannot continue in this manner and at this level unless we see matching income growth,” he concluded.

How Brexit could affect the global economy (including U.S. housing) 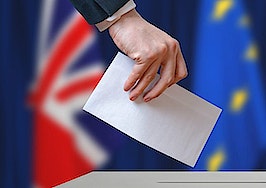