Many variables contribute to a happy renter base. Most would probably assume pricing is the major factor for renter satisfaction, but a recent analysis from Apartment List indicates otherwise.

Many variables contribute to a happy renter base. Most would probably assume pricing is the major factor for renter satisfaction, but a recent analysis from Apartment List indicates otherwise.

The smallest portion of confident renters fell in Baltimore, Memphis and Detroit, which are, coincidentally, lower-priced markets. 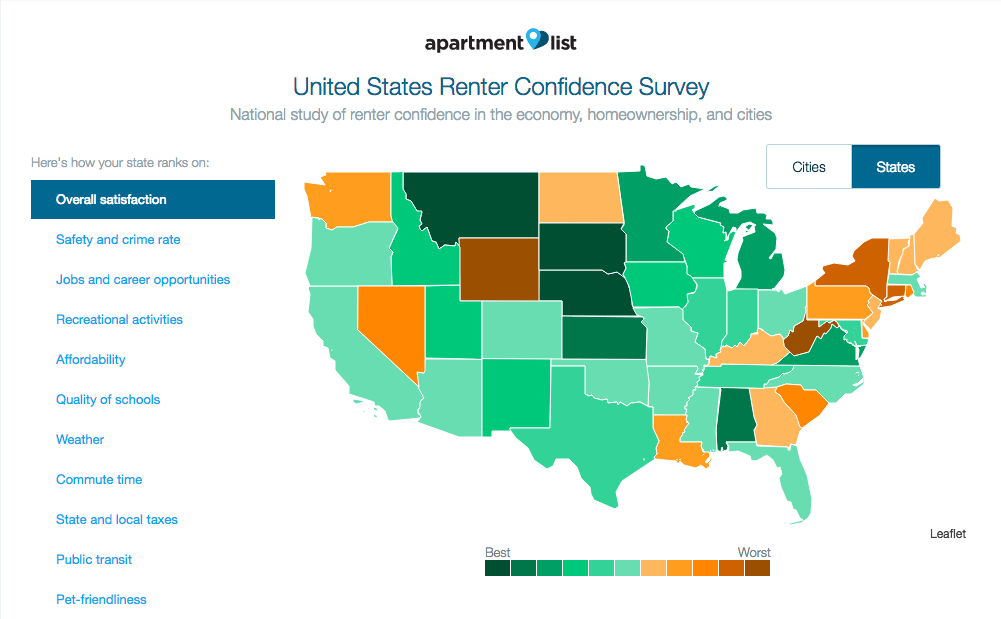 The U.S. homeownership rate is at a half-century low, according to the report, pushing the share of renters across the nation to 37 percent of households, or 110 million Americans. Over 30,000 respondents participated in Apartment List’s analysis.

While pricey cities like San Francisco posted high renter satisfaction, affordability is still top-of-mind. In fact, 44 percent of renters claimed to be either ‘very dissatisfied’ or at least ‘somewhat dissatisfied’ with the affordability in their town. However, low marks in affordability weren’t enough to push some of the most expensive markets out of superiority.

The strongest predictor of renter satisfaction, in fact, was the local job market. Cities that scored an A- or above were almost 3.6 times as likely to score an A- for overall satisfaction compared to those that scored a C or lower.

The strongest predictor of renter satisfaction was local job market

Aside from career prospects, safety was a chief concern for renters, the report shows. However, just 52 percent reported they were satisfied with crime rates in their city.

Satisfaction across the country

Overall, big cities did not fare as well with renters as smaller or mid-sized locales did. While 52 percent of mid-size and small city renters were happy, just 24 percent of those in big cities shared the positive sentiments.

California, which received a “D” in affordability, showed six cities with A+ overall scores, including Burbank, Chula Vista, Glendale, Irvine, Pasadena and Santa Monica. As you might have guessed, California received top ratings for weather, pushing the overall grade in the Golden State to a B-.

While San Francisco received an A- in overall renter satisfaction, affordability scored an F. San Francisco also scored a failing score for quality of schools. 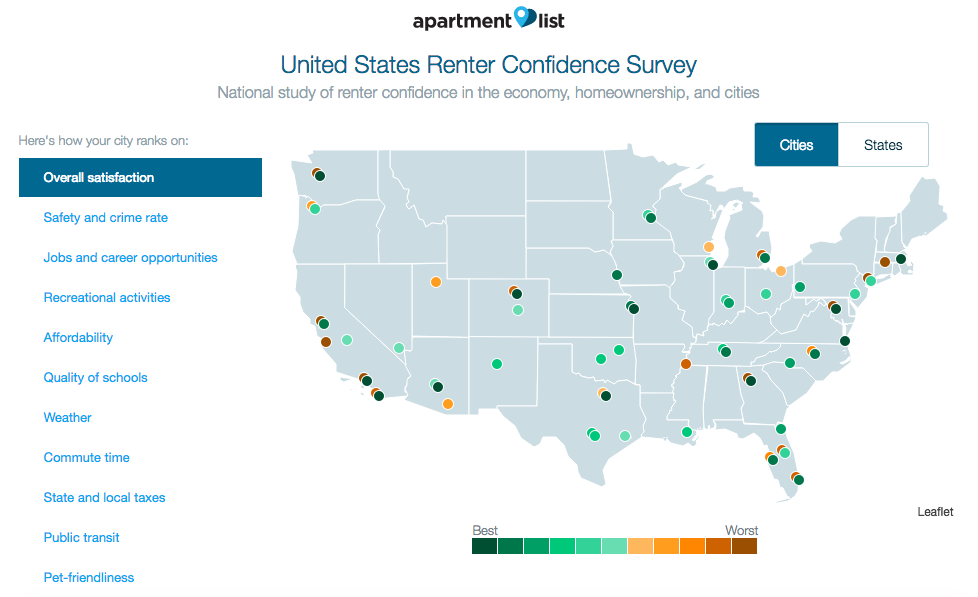 Los Angeles scored satisfactory, with a C grade, which was pulled down by affordability and school rankings.

Chicago renters gave the Windy City a B- for overall confidence. Safety and crime, along with quality of scores and weather, received a D. However, public transit was given excellent marks.

Chicago renters scored the Windy City a B- overall.

Despite astronomical prices and affordability failing, New York received a B grade in overall satisfaction. Safety and crime, career opportunities, public transit and recreational activities boosted satisfaction levels. Despite this, the Bronx borough was given an individual failing score.

Washington, D.C., received an A-, primarily due to good jobs and enhanced public transit. The nation’s capital received a D for affordability and a C for safety. Baltimore was given a failing grade due to safety along with state and local taxes. Somewhat unexpected, affordability in Baltimore was only considered average.

Houston scored a B- in renter satisfaction, lifted by the job market, nonexistent state income taxes, affordability and schools. Nevertheless, safety, weather, commute and recreational activities were viewed as mediocre by local renters.

Miami was lower on the list, with a C- overall, matching Magic City’s affordability score. Jobs, safety and surprisingly, recreational activities, all fell in the C range. Weather and schools fell in the B range.

Where do renters have a shot at homeownership?