Washington D.C. and Baltimore both had reported moderate growth in August, the report shows, with annual rises of 3.6 percent and 3.9 percent, respectively. Both are on a similar pace for the rest of the year, with a reported 2.8 percent and 2.4 percent year-end growth for Baltimore and D.C.

Washington D.C. was near the top of the list for new construction in August, just below Houston and Dallas. Completions made up 3.6 percent of the total stock of new homes, and by the end of 2016, the Yardi forecast is for 17,800 new units.

By the end of the year, Yardi predicts 3,887 new units to be delivered in Baltimore. A total of 1.9 percent of its stock was new inventory in August. 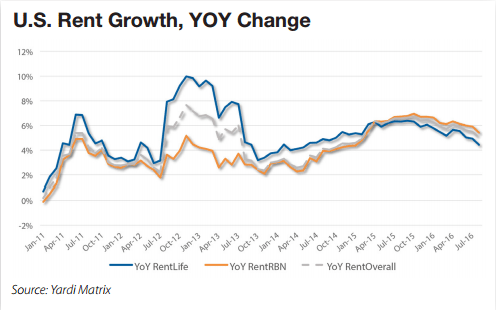