Despite the drop, first-time foreclosures across the five boroughs are up since last year, according to PropertyShark’s Q3 foreclosure report.

There were 525 home foreclosure auctions in NYC during Q3, compared to 673 residential properties in the previous quarter — a drop of 22 percent. However, scheduled auctions rose annually by 24 percent. In the third quarter of 2015, NYC posted 423 first-time auctions, the report shows. 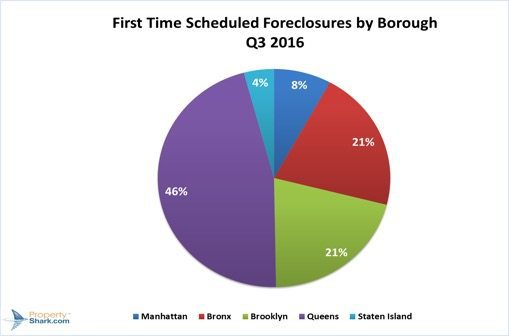 The largest portion of new foreclosures in Queens fell in ZIP 11413, spanning the neighborhoods of Laurelton, Cambria Heights, Queens Village and Glen Oaks. There were 24 first-time auctions scheduled in this area at an average lien of $463,862.

ZIP 11208, comprising East New York, New Lots, City Line and Starrett City, posted the highest activity in all of Brooklyn, with 13 first-time foreclosures set for auction. The average lien in the area was $510,447.

In the Bronx, first-time foreclosures rose 33 percent annually, jumping from 83 to 110 occurrences. Rates dropped 28 percent from a previous 153 scheduled auctions seen in the second quarter.

The Bronx ZIP 10466, affecting portions of Williamsbridge, Baychester, Woodlawn, Wakefield and Eastchester, held 15 new foreclosures at an average lien of $383,071.

Unlike the other four boroughs, Manhattan’s foreclosure rate rose quarter-over-quarter by 68 percent, reaching 42 properties in Q3. Annually, Manhattan first-time auctions are up 2 percent from a previous 41 scheduled homes.

Manhattan’s most affected area was ZIP 10036 in Chelsea and Clinton, with five new foreclosures and an average lien of $633,972.

Staten Island was the only borough to post both annual and quarterly dips in first-time foreclosures, down 27 percent and 60 percent, respectively. Staten Island posted 22 scheduled residential auctions in Q3, compared to 30 the year prior and 55 last quarter.

Pre-foreclosures down in NYC

Despite the annual jumps in scheduled auctions, pre-foreclosure rates are substantially healthier compared to mid-2013, when 4,041 Lis Pendens were filed. In the third quarter of this year, 3,016 homes went into pre-foreclosure.

Lis Pendens cases are down 10 percent year-over-year, according to the report. Manhattan featured the largest yearly drop, at 18 percent, followed by the Bronx, at 13 percent.

Compared to Q2, Lis Pendens cases across the Big Apple are down 9 percent. 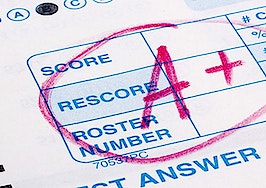 Where are the best public school districts near NYC?