Some Californians face the thought of a massive earthquake with a bit of sangfroid. After all, we’ve been hearing about “the big one” for so long that it feels like an urban legend.

In recent months, quakes in Italy and New Zealand have created renewed fears about the potential havoc that could be wreaked by a major quake in California.

It was once believed that a quake impacting both Northern and Southern California simultaneously would be impossible because they are two independent segments of the same fault. 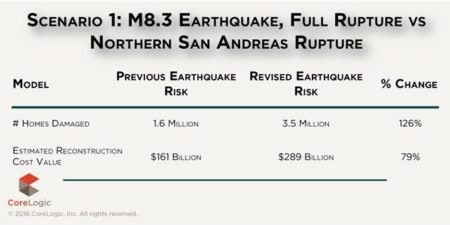 Using the  UCERF3 hazard data, CoreLogic estimates that number of homes damaged in an earthquake with a magnitude of 8.3 along the San Andreas fault could be as many as 3.5 million, a 126 percent increase from the 1.6 million previously estimated.

The accompanying reconstruction cost value (RCV) ticks up to $289 billion, an increase from the $161 billion previously estimated. 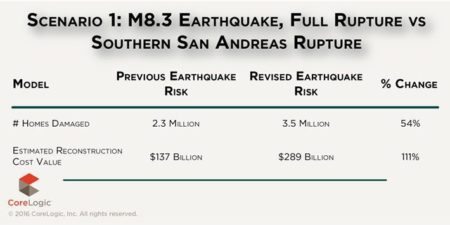 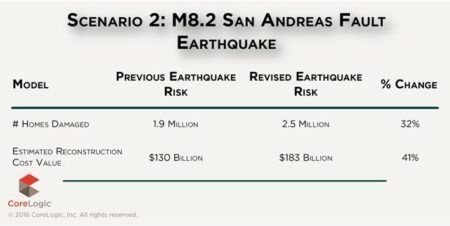 A slightly smaller magnitude 8.2 or 8.0 earthquake scenario could still involve both regions of the fault as well as an increase in the number of homes damaged and the RCV.

The estimated number of homes damaged in these scenarios includes those that sustain damage of 5 percent or more of the total reconstruction cost value of the property.

What most people in California want to know is the likelihood of a major earthquake occurring soon.

Last spring, a presentation by Thomas Jordan, director of the Southern California Earthquake Center made waves when he referred to the fault as being “locked, loaded and ready to roll.”

The idea of the fault being due for a quake gets a little complicated because different areas of the fault have ruptured at different times, but the consensus is that we are overdue for a large seismic event along the fault.

The full report from CoreLogic (which can be downloaded here) highlights the changes to risk management now that the fault’s northern and southern sections are no longer seen as independent.

Although magnitude 5.0 to 6.5 events and magnitude 6.5 to 7.5 events have a higher probability of occurrence, a massive devastating earthquake can’t be ruled out. The discovery impacts not just the insurance industry but also plans for response and recovery, infrastructure and the disruption to the global economy that could occur.

Earthquake damage is not covered in a standard homeowner’s policy, and so this increased earthquake risk also touches the mortgage industry.

As California agents know, the Alquist-Priolo Earthquake Fault Zoning Act of 1972 requires property owners and agents to disclose if a property lies within an earthquake zone and prohibits new construction within earthquake zones unless a geologic investigation shows that the fault does not pose a hazard to the proposed building.

This act had an impact on Los Angeles development last year as the city debated whether to allow the construction of the Millennium Towers in Hollywood.

For quake watchers, the LA Times earthquake news section is an excellent resource for both the history of past California quakes and insights on the latest predictions, and the USGS has a map with updates on recent quakes larger than a magnitude 2.5.

For both homeowners and renters, staying aware of earthquake risks and having a plan in place should a major quake occur is simply common sense.

We are warned so often that it can seem like noise, but preparation might help prevent loss of life. The California Department of Public Health maintains a preparedness website with details on creating emergency kits and plans. 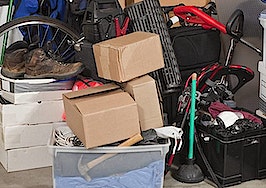 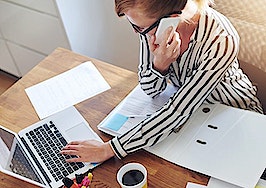 How robots are upping the luxury real estate game 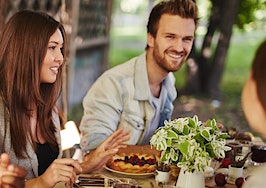 What are real estate agents thankful for this year?