The Federal Reserve raised rates at its December meeting by 0.25 percent. Here’s what you need to know about the event.

The Federal Reserve raised rates at its December meeting by 0.25 percent.

Here’s what you need to know about the event.

1. The Fed raises or lowers the overnight cost of money, “Fed funds,” not mortgage rates.

All the rest of the time, long-term rates move in market response, guessing at the future slope of economic growth and Fed moves.

2. Mortgage rates did rise after the hike today.

Mortgage rate quotes are always hard to decode, presented as they are in deceptive mixtures of rate and fee. The 10-year T-note is definitive and in plain sight, 2.43 percent this morning and 2.53 percent this afternoon.

It will continue to hike until it either slows the U.S. economy to growth well under 2 percent and sees the unemployment rate rising to 5 percent or a little more, or (by accident) causes a recession.

Every prior hiking cycle has ended in an “accidental” recession. 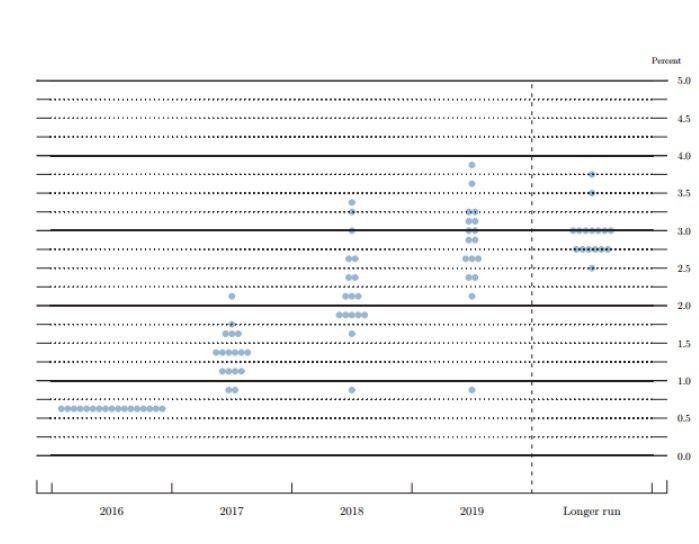 The Fed’s “scattergram” for the next 3 years.

4. The future signal that the Fed will be nearing an accidental recession: Short-term rates keep on rising after each hike, but long-term rates stop.

The short-term marker is the 2-year T-note: From now until the accidental recession, compare 2s to 10s every day.

The jump in all rates on the morning after the election partly reflects Donald Trump‘s intentions to goose the economy, but nothing personal.

Gridlock had been nice and comfy, and Clinton would have extended gridlock. Trump means uncertainty above all other things, and unified government means that it may act, which could be good… or not.

6. Long-term rates had begun to rise in summer, partly the result of foreign central banks’ slowing their purchase of their nations’ bonds.

As German and Japanese yields have risen, so have ours.

7. That summer rise, then the election jump…the bond market had ignored the Fed’s threats for four years, and a slowish economy made bond traders right.

A good part of the election jump was an accidental trigger of a bond market overdue and poised to sell and raise long-term rates.

8. The stock market? Try not to pay attention.

If stocks went into free-fall, that would give pause to the Fed. But the Fed would see an orderly unwind of a couple of thousand Dow points as normal stock-market wandering. The exuberance boys are on their own.

9. Back to Trump. It may take a day or two, or deep into the night, but I’ll be amazed if we don’t get a tweet-storm trolling Janet Yellen.

The great Fed chair, William McChesney Martin, gave us the Fed-defining line: “It’s the Fed’s job to take away the punch bowl just as the party gets going.”

In a matter of hours or a few days, His Tweetness will roar: “Take away MY punchbowl? MINE?”

10. In 1980-’82 the nation survived a collision between the Fed and a new administration hot on stimulus, but the result was sky-high interest rates.

The most encouraging news this week: Senate majority leader McConnell is opposed to any deficit-adding tax cuts or stimulus spending.

The new administration can focus on reducing regulation and adding to productivity — but so long as McConnell holds, we will not have a replay of Paul Volcker standing on red-hot, smoking brakes while an overeager crew rolled out the money hose.

The Fed just hiked interest rates -- what to expect