The temptation to get into the Trump mud-wallow is overwhelming, hence all the more reason to back away and look at the whole market/economic picture, and over time.

The temptation to get into the Trump mud-wallow is overwhelming, hence all the more reason to back away and look at the whole market/economic picture, and over time.

Election day and beyond

On election day the financial markets expected gridlock to continue open-ended — hardly an ideal circumstance, but comfortable and predictable, as gridlock had been the state of affairs most of the time since mid-Clinton twenty years ago.

By midnight at the end of election day, markets began to re-price, assuming that one-party government would break the gridlock and at least some campaign promises would take effect. The re-pricing — the “Trump Trade” — was different for stocks than bonds, although financial media conflate the two.

Credit markets re-priced for hotter economic growth, or at least attempts at heat (spending and tax cuts), and the presumed heat also accelerated guesses at the Fed’s rate-hiking. Faster economic growth means higher risk of inflation, and bonds and the Fed are all about inflation.

The stock market is all about earnings, not GDP (gross domestic product) growth. Inflation harms stocks, as do higher rates — but if earnings rise, so do stocks.

The new economic plan has a headline push of GDP growth to 3 percent or 4 percent, double the trend of the last decades, but the stock-igniter is the list of profit enhancements in the new plan.

There is nothing in the plan which would add to jobs or higher wages. The plan is the all-time trickle-down: tax “reform” would cut corporate taxes and in theory business would then invest more and in secondary effect hire more.

Now, three months after the election, how are the plan and the Trump Trade doing?

The bond market flattened six weeks ago — still assuming the Fed has three hikes this year, and antsy for the future beyond, but the “reflation” aspect of the trade has stalled just as the administration has. Reflation is the cutesy euphemism for intentionally inducing inflation.

Stocks had a nice week last week, Dow 20,000 (no more significant than 12,345), but also flattened in mid-December. Stocks still have some faith in profit enhancements to come, but fading.

The agenda and the economy

Two separate matters: the administration’s possibilities to enact its agenda, and what happens to the economy if so.

The former is a matter of political opinion.

Mine: Trump has not made a new friend since the election; a 36 percent approval rating at the start (Quinnipiac confirmed this week) is not a “movement,” and these proposals will be hard to get through Congress.

On the potential effectiveness of these proposals if enacted, no mainstream professional thinks they will create anything more than low-order patches of chaos.

The Bureau of Economic Analysis released fourth-quarter 2016 GDP on Friday, 1.9 percent versus higher forecasts, but basically returning to baseline after a nice summer and early fall, 3.5 percent in Q3. Hopefully the administration will allow the BEA to continue to report.

All of the math, theory, practical experience and taking into account demographics says the only way to jack GDP growth without inflation is to embark on a long, deep and broad effort to raise productivity. Nothing in administration proposals will address the issue.

The tariff threat to Mexico on Thursday and insult to its president had the first direct administration effect on markets, stopping a stock rally cold and pushing cash to bonds for safety.

The unified leadership in Congress is wrestling with Obamacare repeal and losing. It is attempting tax “reform,” which would pay for corporate goodies with this new wave of tariffs. It has no plan for funding a tax cut for anybody.

More of the unified Congresspersons every day adopts a public “duck and cover.” The president’s first week did not go well, his personal behavior not sustainable. Not one thing the administration has said or done will help healthy economic growth — on net, has been harmful. 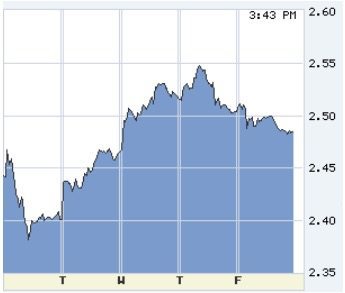 The U.S. 10-year T-note in trading this week. The assault on Mexico shows clearly in real time on Thursday. 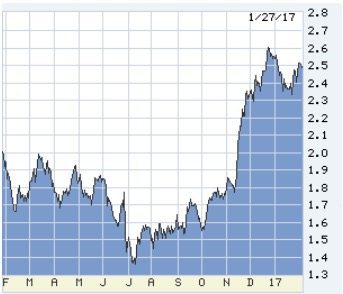 The 10-year one year back

The 10-year one year back marks the Trump Trade stall. 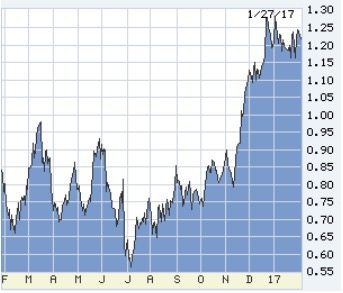 The U.S. 2-year T-note says that even Fed expectations have flattened.

From the BEA, GDP back through 2014. Gather ye rosebuds while ye may. 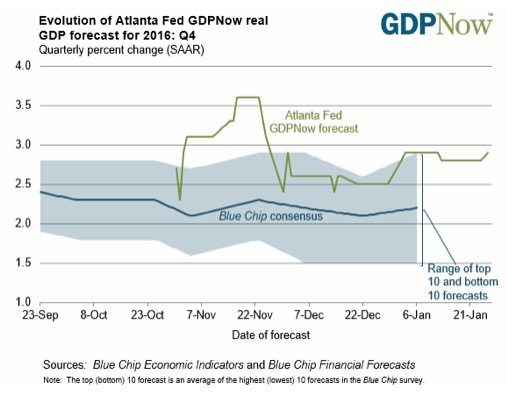 The Atlanta Fed Tracker finally got one wrong, its updated forecast Thursday of Friday’s GDP release was off by one full percentage point, and the always-wrong economists much closer.

What we can learn about leaders from their speeches