We must now keep track of two universes: the actual financial one and the Trump one. These are alternate universes, not parallel (which would imply straight lines), but are in frequent contact. A pair of charts below shows how disparate the two are.

We must now keep track of two universes: the actual financial one and the Trump one.

These are alternate universes, not parallel (which would imply straight lines), but are in frequent contact. A pair of charts below shows how disparate the two are.

The “Trump Trade” began on the day after the election, a glorious market eruption based on a new government synchronized in every way to produce growth and profit.

The fizzle has not been uniform — instead it’s more like a bad day for geyser-watching, spouts fading to spurts and little blurps.

Long-term rates topped on December 15, the 10-year T-note touching all-important 2.60 percent, and have wobbled lower since, 2.40 on Friday.

If the Trump Universe were all we had to deal with, long-term rates now would quickly fall. But the real universe includes the Fed, and it is going to raise the cost of money steadily no matter what Trump does.

The Trump fizzle reached a new low with his press conference this week, an aimlessly combative session. Stocks and the dollar both fell in real time. His polling has tanked, his approval rating now 37 percent, down seven points in 30 days (Quinnipiac).

The only odd part: Their most reassuring moments were their forthright disagreements with Trump, from Russia policy to waterboarding.

The most uneasy performance was by Tillerson. Big, tough and able; as-advertised rich Texas oil buzzard, but not resembling a Secretary of State.

There’s more to global diplomacy than cutting deals. Tillerson threw one line scary enough to stop the heart, apparently unaware of consequences: “We must send China a clear signal that first, the island-building stops, and second, your access to those islands is also not going to be allowed.”

That U.S. policy would mean war. Markets don’t like war. There are things worth a fight (North Korean nukes), but perhaps not the South China Sea.

The economics of the Trump Universe are chaotic. Everyone loved the blast at Big Pharma — way overdue.

On the other hand, Trump’s job-saving demands on business are exactly the 1960s-1980s policies of the United Auto Workers and Democrats, which destroyed U.S. auto manufacturing.

Substantial severance payments to dislocated workers, out-placement and retraining? Absolutely. But “border-tax” protectionism will do nothing but hurt U.S. productivity and encourage retaliation.

To Trump’s credit, he says he wants everyone to have health insurance. He wants Obamacare repealed and replaced all at once and now.

He has no clue how Congress works. Or mostly, doesn’t work. The coming adventure to enact Dr. Donald, with Nurse Ryan as midwife, will paralyze Congress.

Republicans have a 52-48 margin in the Senate, the Veep available to break ties. If only three Republican senators refuse to vote for any bill, that bill is dead.

Repeal Obamacare and defer replacement coverage? Then we lose the tax revenue which funds current coverage. Nurse Ryan has his own loopy system of tax credits, and absurd faith that competition among insurance companies will reduce health care costs — which have risen three times the rate of inflation for twenty years.

If you really want to cover everyone, and end the traps of existing condition and free-riding, then cover everyone. Tax accordingly, and get to work to reduce fundamental cost.

On to the Treasury

Ahead shortly is the confirmation testimony of Steven Mnuchin for Treasury Secretary. His recitation of intended financial policy may destabilize markets, especially overreaching changes in the tax code.

Reform is one thing, revolution another. He will say more about his plan to privatize Fannie and Freddie. He may mention the administration’s plans for the Fed.

The Fed has two seats open for governors, and Janet Yellen’s term as Chair has only one year left. A big right-wing crew hates government in general, hates the Fed’s independence in particular, and despises the Fed for its inventive action to get us out of the Great Recession. The Fed-haters would force it to establish mechanical policy controls and eliminate the use of judgment.

More problematic for Trump and the right, all of the Fed-haters think the Fed’s policy is too easy.

If you’re going to manipulate Fed policy by new appointments, you have three choices: easier, tighter, or use-your-judgment.

The first may get you faster economic growth, but will get you inflation, higher rates and a recession. Tighter is simpler: You get a recession.

Blab and tweet and threaten about anything you wish, but please — not the Fed. 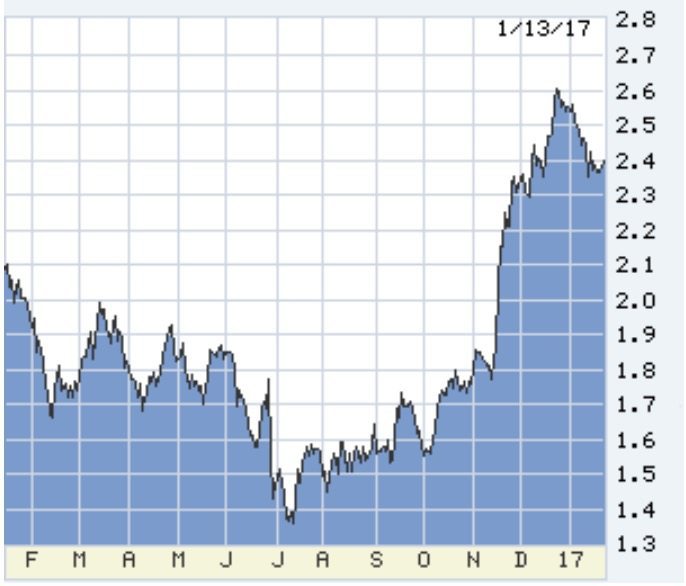 The 10-year T-note in the last year. The post-election spike has formed a nice head-and-shoulders which ordinarily would indicate declines ahead — but the Fed is coming. 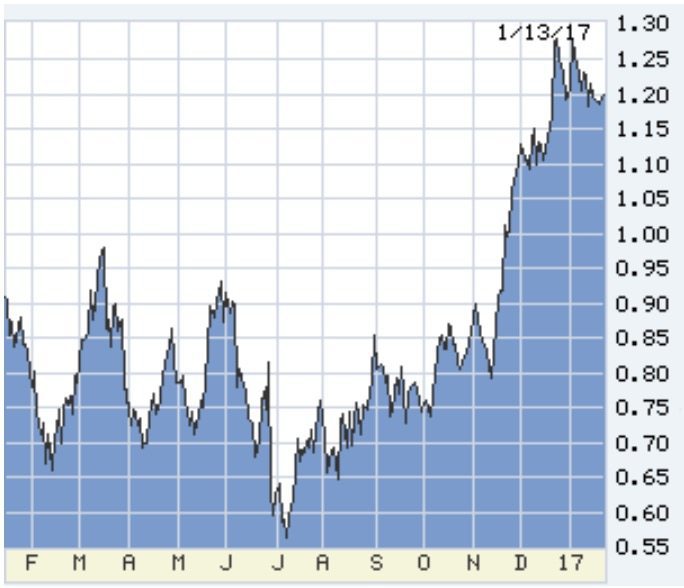 The 2-Year T-note is the marker of the Fed — no retreat here.

This business about 2.60 percent as a magic level of the 10-year… in this chart, see thirty years of a declining “channel” of yield on the 10-year. Break out of the channel on the upside — inevitable at some point — and all traders assume a substantial jump will follow.

And Now, “The Fever.” Rarely does business or financial data so clearly separate emotion from reality. The charts following are results of monthly surveys by the National Federation of Independent Business, the trade group for small business. NFIB members are more conservative (by a lot) than the general population. 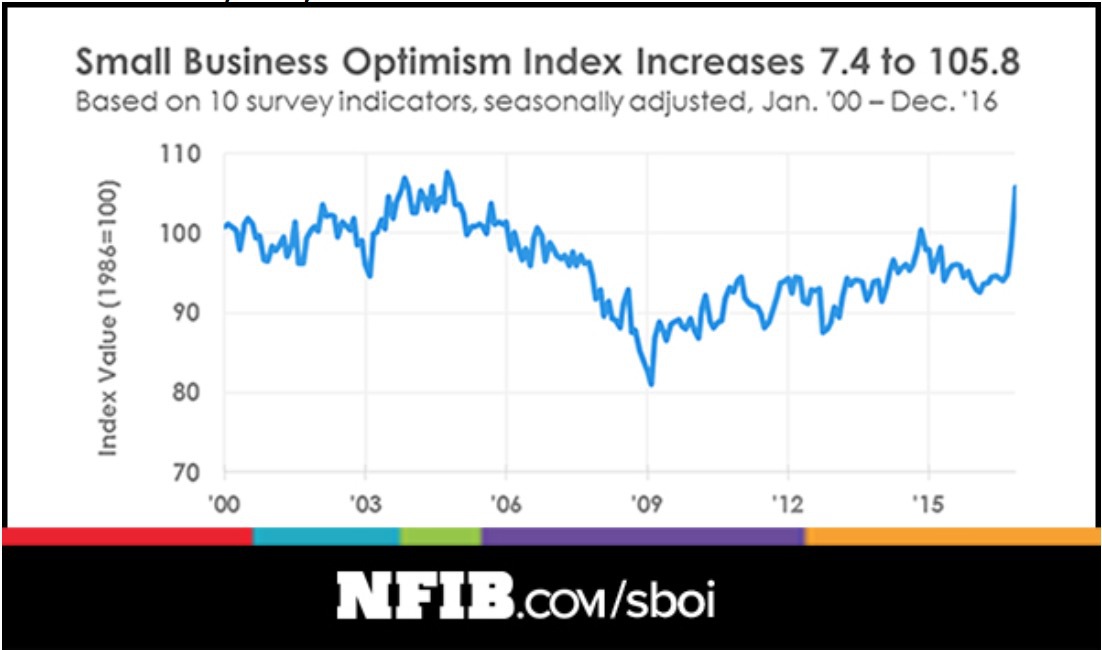 “Optimism” alone. In the forty-year history of NFIB surveys none has found a vertical spike like the one in the NFIB post-election survey. 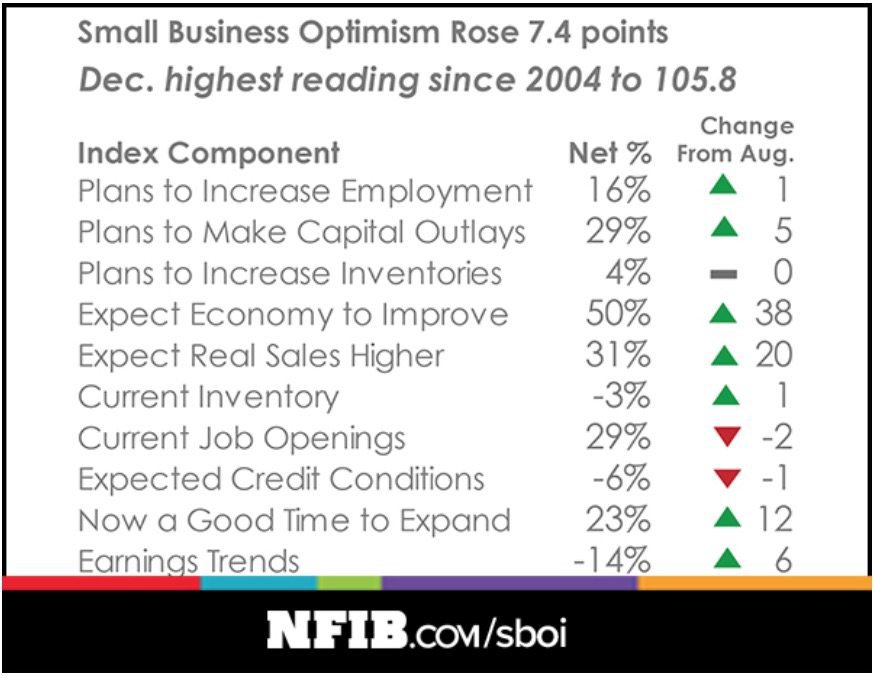 The second chart is operational detail in the same survey. NFIB members are elated at Trump’s election — the forward-looking and emotional topics — but the actual details of business operations are unchanged. Maybe elation will turn to investment, expansion, and a better economy. Maybe not. 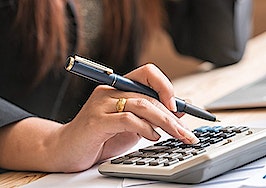 What global economics (and politics) foretell for rate changes