First, the good news: The economy is doing so well that the Federal Reserve will increase the cost of money by 0.25 percent on March 15, up to the 0.75 percent-1.00 percent range. All Fed officials have been on the same page, rare unanimity.

First, the good news: The economy is doing so well that the Federal Reserve will increase the cost of money by 0.25 percent on March 15, up to the 0.75 percent-1.00 percent range.

All Fed officials have been on the same page, rare unanimity.

Chair Janet Yellen’s speech this morning iced the deal and is a splendid review of Fed policy in the last few years. Yellen stuck to “scaling back” accommodation, not “tightening” — as she will until the next recession, unless forced by an inflation outbreak to speak overtly of tightening.

For now, the Fed is just taking away the punch bowl, not closing the party.

In any pre-tightening moment, the telltale speakers are doves converting to hawks. Brainard has been a dove for one special reason: She has been most attuned to conditions overseas and weakness there as the main reason for the Fed to be cautious.

On Wednesday: “We have seen improvement in inflation and activity both at home and abroad following a period when the drag on domestic activity from abroad was considerable…Recoveries are gaining traction in China, Europe and Japan.”

I respect her a lot and would like to agree wholeheartedly, but aging demographics and debt are still in play everywhere; there has been no recapitalization of European banks, the euro is just as harmful, Japan is still a wreck, and China is going to slow down — unpleasant and involuntary adjustments ahead.

Global inflation has turned a corner, and no matter what, inflation is the first-response duty of all central bankers. Brainard sees the U.S. near its inflation target, too.

Most important, Brainard joined several other Fed officials exploring the Fed’s next step, to begin simultaneously with continuing hikes in the cost of money: unloading the bonds and mortgages which it bought from 2009 through 2014 to rescue markets and the economy.

The Fed owns an excess of about $4 trillion. Gulp.

The double-gulp: Of that sum, $1.6 trillion are mortgage-backed securities (MBSs) — roughly 20 percent of all first mortgages outstanding.

As these holdings have matured, the Fed has reinvested the proceeds, net holdings constant. If the economy continues on current course — about 2 percent gross domestic product (GDP) growth, inflation around 2 percent, unemployment below 5 percent — before the end of next year the Fed will begin to disinvest. Markets will have to absorb all new bonds and MBSs as the Fed withdraws as a buyer, which will push up long-term rates.

Why would the Fed exit this way? It never wanted to buy all of those bonds in the first place, it has no experience with an overlarge balance sheet — and because every Republican is chewing on it about them.

And for one good reason: When the Fed last tightened, eons ago, 2004-2006, raising the overnight cost of money (the “Fed funds” rate), long-term rates did not rise, which added fuel to the housing and mortgage bubbles.

The Fed will not let it happen again: If long-term rates do not rise as the Fed hikes the Fed funds rate, then the Fed will either raise funds higher and faster, or dump its bonds and MBSs faster.

Sorry, but that’s how it will be. And it is probably proper policy, although it will increase dramatically the chance of accidental recession.

There is nothing wrong with the Republicans’ wish for a smaller and less-intrusive government. But if they intend a civil society, skinflint abandonment of the least of our brethren will not do. Nor will free-money fantasies, like installing a “Border Adjustment Tax” and expecting the outside world to cough up $1 trillion to pay for domestic tax cuts.

Same for Democrats, infamous for belief that infinite sums can be extracted by taxing the rich, demonizing people by job category (bankers…ick) and holding country folk in contempt as slow-witted.

To have a society, domestic or global, we must be in it together. A healthy society above all else is cooperative. The first party to get that, wins — as will all of us.

The miracle of the age: The U.S. and global economies are doing better and for the most part ignoring top political leadership.

Other people on Wednesday night deserving a standing ovation: The Fed and central bankers in general. With little help from other arms of government, the Fed has pulled it off — an economy growing so well that we can again worry about “too fast,” and mistakes on the tight side. Hurrah! 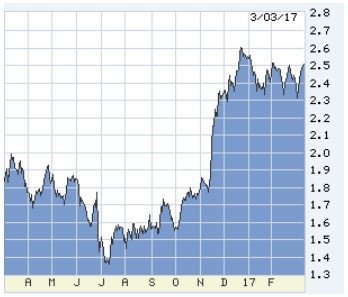 The 10-year T-note in the last year. When it breaks 2.60 percent going up, expect a bigger jump followed by increased volatility (true up-down, not just up).

Another note: the spike after election day was at least as much a delayed and sudden acknowledgement of Fed tightening to come as expectation of new administration stimulus. Thus, as that stimulus plan hits wall after wall, do not expect rates to fall back to pre-Trump. 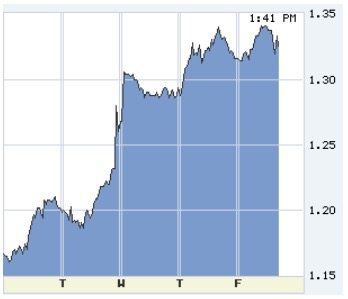 The Fed-sensitive 2-year T-note, rising all week in response to Fed speakers. Watch 2s carefully, as soon that market will begin to handicap another hike at the June meeting.

Chart is back to 2002, shows the last tightening cycle ending in the 2006 plateau — the period of Greenspan’s Conundrum. If you began trading bonds at age 22 in 2007, you’re now 32 and have no experience with Fed tightening.

This chart will be the most important until the next recession: the spread between Treasury 10s and 2s — whenever 2s rise above 10s, recession. The spread now is the tightest since the last recession. 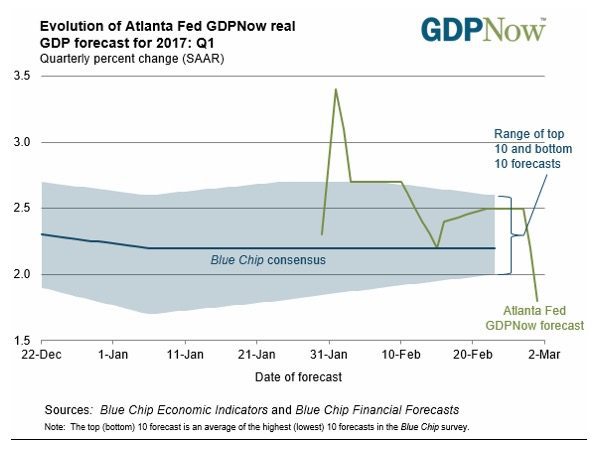 The GDP Tracker has taken a sudden nosedive below 2 percent growth in Q1, but that move is more a quirk in GDP calculation than economic weakness. The Twin Institute of Supply Management surveys for February (the old purchasing managers’ indices) are roaring — now in the high-50s, trend-breaking upward and historically high. 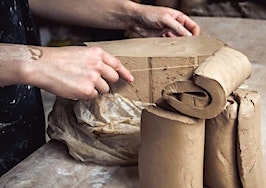