The March 2017 existing-home sales numbers from the National Association of Realtors (NAR) contained some hope that maybe (maybe!) inventory was about to normalize, with sales reaching their fastest seasonally adjusted annualized growth pace since February 2007.

That hope was dashed with the release of NAR’s April numbers. Sales fell 2.3 percent from March’s rate, although they showed an improvement (by 1.6 percentage points) over April 2016’s sales metrics.

And the median number of days that a home is on the market dropped to a new low in April — just 29 days. That’s down from 34 days in March and 39 days in April 2016; 52 percent of homes sold in April were on the market for less than a month.

“Last month’s dip in closings was somewhat expected given that there was such a strong sales increase in March at 4.2 percent, and new and existing inventory is not keeping up with the fast pace homes are coming off the market,” said Lawrence Yun, NAR’s chief economist, in a statement. “Demand is easily outstripping supply in most of the country and it’s stymieing many prospective buyers from finding a home to purchase.” 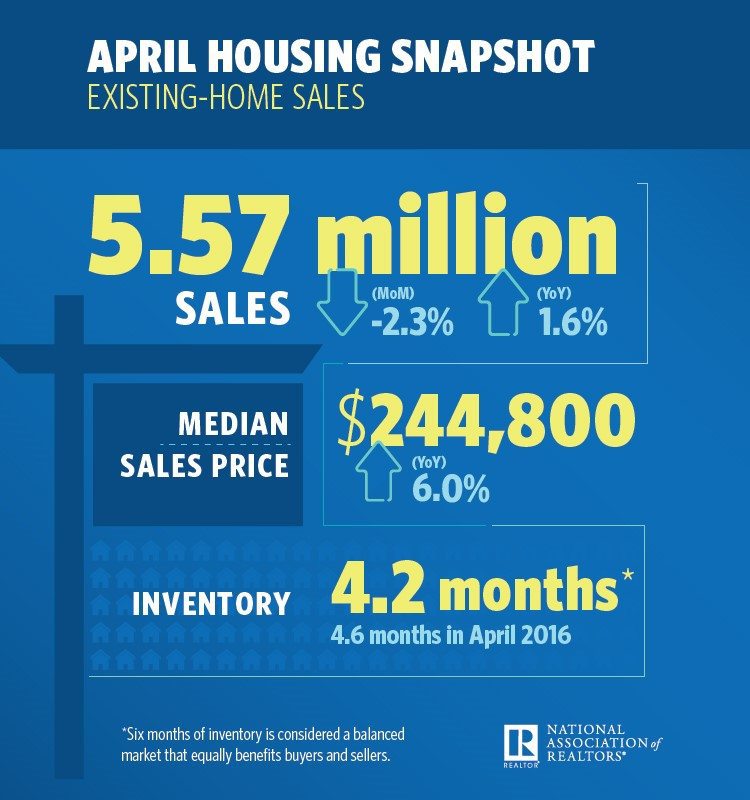 The median price for existing-home sales for all housing types reached $244,800 in April, up 6.0 percentage points year-over-year. “April’s price increase marks the 62nd straight month of year-over-year gains,” noted NAR in its release.

Total housing inventory at the end of the month showed 1.93 million existing homes available for sale — that’s down 9.0 percent from a year ago, when 2.12 million homes were on the market. This is the 23rd consecutive month that housing inventory has dropped (year over year). A “healthy” level of inventory is about six months; right now, we’re looking at 4.2 months’ worth of unsold inventory, down from 4.6 months in April 2016.

“Realtors continue to voice the frustration their clients are experiencing because of the insufficient number of homes for sale,” said Yun. “Homes in the lower- and mid-market price range are hard to find in most markets, and when one is listed for sale, interest is immediate and multiple offers are nudging the eventual sales prices higher.”

Listings were on the market for the shortest amount of time in:

Individual investors purchased 15 percent of homes for sale in April, the same level as March and up from 13 percent in April 2016. Most investors (57 percent) paid cash in April 2017.

March home sales were through the roof