Selling a home surrounded by controversy is no easy task. The luxury property formerly owned by the late New England Patriots’ football tight end Aaron Hernandez is no exception. After a $1.3 million offer fell through, the North Attleborough, Massachusetts, mansion is back on the market as of last week.

According to the Boston Globe, which spoke to the former player’s defense attorney George Leontire, the buyers backed out because they didn’t want a lot of public attention.

While serving a life sentence for the murder of semi-professional linebacker Odin Lloyd, Hernandez committed suicide in his prison cell in April.

Screen shot of the home listing.

The 7,100 square-foot home at 22 Ronald C Meyer Drive, listed at a price of $1.29 million in Bristol county, is being marketed by Keller Williams’ Realtor Yvonne Thompson, who referred all calls to Hernandez’s estate lawyers. According to realtor.com, the house has now been on the market over 490 days.

Homes associated with high-profile deaths or litigation often have no trouble attracting people to their open houses. As Bernice Ross, CEO of Realestatecoach.com put it, they can attract a “three-ring media circus,” but sealing the deal can be troublesome.

News that the house is back on the market due to publicity apprehensions will likely be used as a negotiating tool when a buyer eventually bites.

Ross advises agents who decide to proceed with listing a stigmatized house to check their state’s disclosure requirements, educate sellers about their options (when applicable) and get up to speed on the steps you are required by law to take. 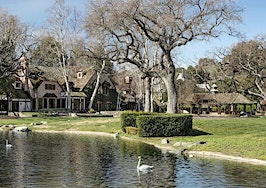