We’re not saying when we’re going higher because we don’t know, but mark your calendars for June 13, 2018 for the day the Fed flipped from stimulus to leaning against the economy. Powell’s second signal: “The U.S. economy is in great shape.”

Long-term U.S. interest rates today are the same as one week ago. How we have arrived at unchanged is a good yarn.

The eventful last week began with the G-7 meeting and our “declaration of war” on Canada. Prime Minister Trudeau got his “special place in hell” by objecting to U.S. tariffs imposed by Trump using Cold War national security powers. Puzzled and annoyed (politely) Canadians had not known that they are a security threat.

Then the Trump-Kim summit. The consensus among analysts seems to be, “Um… What was that?” Mr. Trump’s performance in Singapore recalls James Thurber’s essay, “If Grant Had Been Drinking At Appomattox,” in which a confused Grant offers his sword to an equally confused Lee. Trump does not drink, but fractured thinking does not require alcohol.

Markets ignored both of those adventures, instead focusing entirely on central bank meetings, the Fed and ECB on Wednesday, the Bank of Japan (BoJ) on Thursday. More on them in a bit — yesterday Trump topped the central bankers in one swell foop, proceeding with a tariff on China’s exports. That did it. Trade war has caved-in the stock market’s knees, which has helped interest rates to stay put.

China will retaliate, but we might get lucky, noise and tit-for-tat posturing but then stopping. However, the same thing lies ahead with Europe, and canceling Nafta would open hostilities with both Canada and Mexico, our two most important trading partners. At the moment a threat, not yet an event.

Before discussing the Fed (save the best for last), first the two lesser central banks. In grand European style, the ECB announced that it will stop buying IOUs in December, but will hold the cost of money to negative-0.4% “at least through the summer of 2019.” Thus simultaneously ending stimulus and continuing stimulus, the yield on German 10s fell to 0.40%, also pulling down on US rates.

(Euro footnote. At a time when the zone could provide some much-needed global leadership it is slipping back into local dithering. Merkel’s government and career may fall any day. The U.S. has its immigration issues, but at least makes its own decisions. Germany via Brussels insists on making immigration decisions for the others, and its own absorption of one million refugees last year is not going well.)

The Bank of Japan today said that it would “patiently continue current monetary easing.” Yup, forever. Japan’s GDP today is about the same as 20 years ago, now about one-quarter the US. Its budget deficit is 4.5% of GDP, about $225 billion. The BoJ today re-committed to buying government bonds at an annual rate of $725 billion (not a typo, three times the issuance of new IOUs). Its 10-year bond yield is 0.036%. Japan’s continuing existence as a financial entity is imaginary, but will last as long as its citizens believe in the yen.

Two huge changes at the Fed are underway, masked by this week’s net-unchanged markets and goofy public policy.

First, from now on the Fed’s rate hikes will matter. Two-and-a-half years of quarter-point nibbling at the cost of money, from 0.25% to 2.00% had no cost or risk, just going from nothing to something. Now “prime” is 5.00%. Helocs will adjust to 5.00% or more this month, as will adjustable-rate mortgages. Every new hike will bite into borrowers.

Second, if the economy does not slow of its own accord the Fed will force it to slow. Chair Powell’s post-meeting written statement and press conference were things of beauty, pleasant shifts from academic-wordy to cordial but blunt and narrow. He dodged every opportunity to engage in politics (trade issues, for example), and gave markets less information about future policy. That tell-‘em-nuthin is back to the future: the old-fashioned Fed always wanted markets to trade on economic information, not Fed wig-wags.

Powell’s two velvet sledgehammers: first in his post-meeting statement, de-bloated by one-third, he removed this line: “… The federal funds rate is likely to remain, for some time, below levels that are expected to prevail in the longer run.”

We’re not saying when we’re going higher because we don’t know, but mark your calendars for June 13, 2018 for the day the Fed flipped from stimulus to leaning against the economy. Powell’s second signal: “The U.S. economy is in great shape.” The Fed’s job in that case: to take away the punch bowl. He did not use McChesney Martin’s old saw, but might as well have had a punchbowl as a prop.

These Fed changes are unmistakable to markets. So, why are rates unchanged? Short term rates rose a bit, the 2-year T-note to 2.56% rising mechanically in anticipation of another Fed hike in September. However, the credit markets are not priced for the Fed’s advertised even-money bet for another hike in December, and three or four more in 2019.

Why? The credit markets spent the last ten years disbelieving the Fed’s announced intentions to hike. It may take a while to react fully, which makes the Fed’s job harder. If we hike and you don’t take us seriously, then we have to hike harder. (Smiley emoji.)

Second, markets feel protected by the possibility of an “inversion,” short-term rates rising above long ones. The Treasury 2s-to-10s spread this week contracted to its narrowest in this cycle, only 36bps. Everyone knows that an inversion means a recession ahead, and the Fed would not invert us on purpose… would it?

The Fed must switch to a pre-emptive stance even if inflation does not rise much above 2%. That is its job. An inversion is no protection, merely an international curiosity which can force the Fed to hike short rates faster and farther. For our own good.

The 10-year T-note just in this last week. What was more important, the Fed on Wednesday, or tariffs on Thursday? You be the judge: 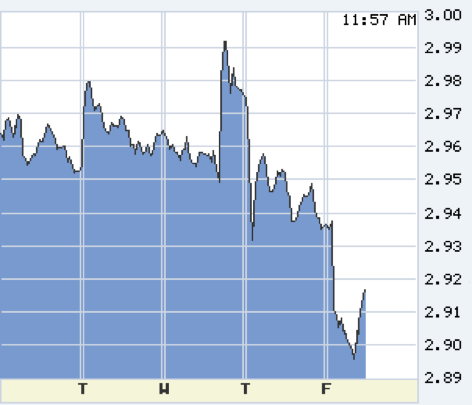 The 10-year T-note in the last year, stuck since February, outside pressure canceling the Fed: 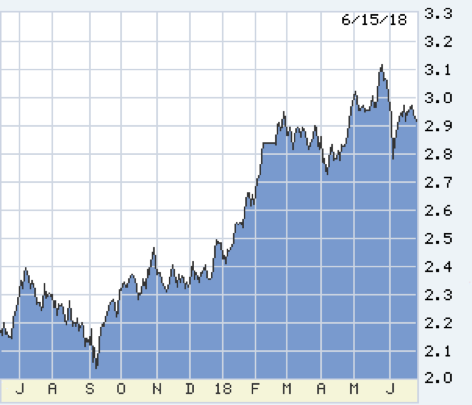 The Fed’s infamous “damned little dots,” each official casting a marker for the location of Fed funds at the end of each year. Throw out the top four and bottom two (the Fed coop includes four known hawks and two doves, and we don’t call ‘em bird-brains for nothing). The other voters mean business — their 2019-2020 estimates are above the “longer run.” Bye-bye punchbowl: 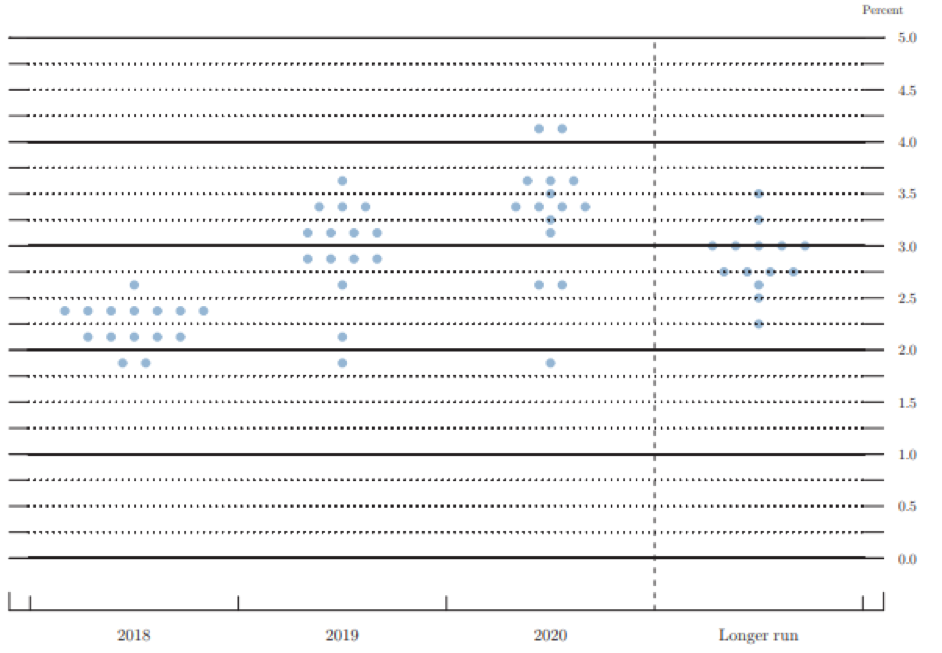 One economic indicator has shifted to heat. The National Federation of Independent Business (NFIB) small-business survey from the 2016 election forward was more political pleasure than actual business performance, optimism way out-running results. The survey for May shows fundamentals quickly catching up: 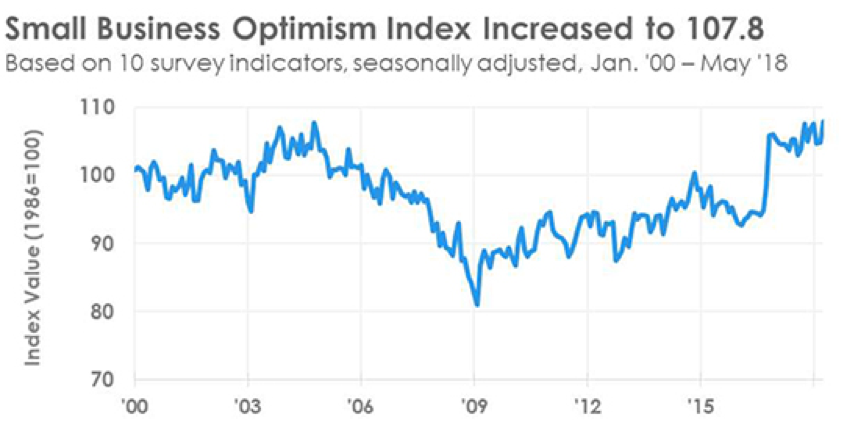 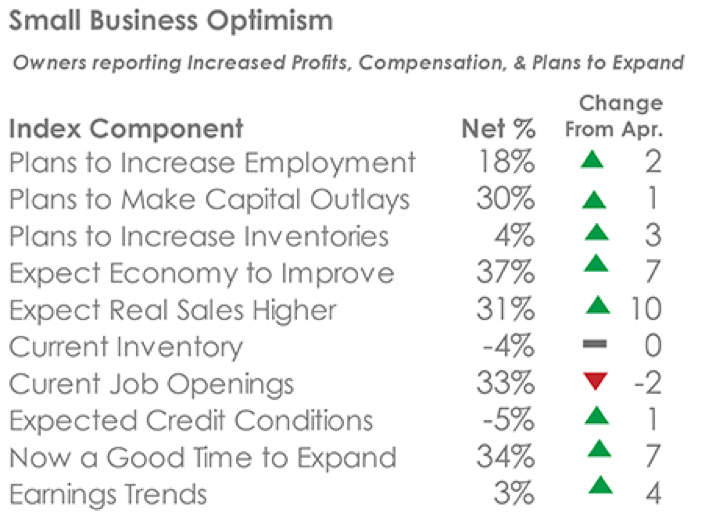 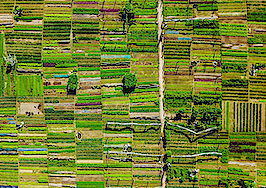 The week in financial markets: 5-ring circus ahead