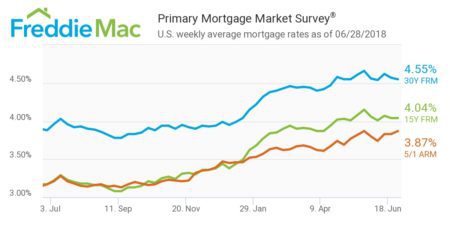 Freddie Mac Chief Economist Sam Khater says mortgage rates have stabilized over the past two months, a piece of good news for buyers who still have to grapple with exorbitant home price growth.

“The decrease in borrowing costs are a nice slice of relief for prospective buyers looking to get into the market this summer,” Khater said in a press release.

“Some are undoubtedly feeling the affordability hit from swift price appreciation and mortgage rates that are still 67 basis points higher than this week a year ago.”

Much like Khater, Hale says buyers should enjoy these declining mortgage rates. But she said buyers need to be cognizant of future hikes and keep the full picture in mind.

“Mortgage rates could continue to move lower if concern that tariffs will hamper economic activity persists,” she said. “However, continued evidence of strength in the U.S. economy, like we might see in next week’s jobs report, could cause treasury rates to resume climbing. If so, it wouldn’t be long before mortgage rates followed back up.”

“Homeshoppers should enjoy these slightly lower moves, but be aware that rates are still 67 basis points higher than one year ago,” Hale concluded. “Coupled with listing prices that are 9 percent higher year-over-year, monthly payments for principal and interest alone are 18 percent higher on the typical home listing.”