A new Zillow report finds that $1 trillion worth of residential homes sit in the potential path of Hurricane Florence.

As of this writing, the Atlantic hurricane is a Category 2, heading toward southeastern North Carolina and South Carolina. There is still a chance it could impact parts of Virginia.

As has been the case in recent catastrophic hurricane events, most recently Hurricane Harvey‘s 2017 landfall in Houston, most of the fear is rooted in the impact of flooding, a result of hours of prolonged downpours swelling rural and municipal bodies of water.

Southeastern North Carolina is particularly known for its network of low-lying rivers, canals, and ocean-fed sounds and inlets. It has 37 counties considered part of its coastal watershed, as defined by the National Oceanic and Atmospheric Administration. South Carolina has 22.

Zillow broke down the values per state accordingly:

The Raleigh newspaper also cited Bloomberg’s Jim Efstathiou Jr. estimate that when the clouds part, Florence could rank in the top ten of most expensive storms, landing the tab somewhere around $27 billion.

North Carolina is consistently battling the enviornment as a result of its location along the country’s central east coast, and it’s elbow-shaped, chain of loosely connected barrier islands, the Outer Banks.

The popular vacation destination is home to thousands of rental homes, many of which rest on 200 miles of fragile, shifting sand dunes and thinly-protected islands, where ocean tides lap at deck supports and first-story stairwells. Many have been moved in recent years.

In 1999, the risk of beach erosion prompted the National Park Service to move the Cape Hatteras lighthouse, one of the nation’s most recognized coastal landmarks.

In a US News & World Report article this week, Robert S. Young, director of the Program for the Study of Developed Shorelines (a joint venture between Duke University and Western Carolina University), said that Florence could be the most destructive storm to hit North Carolina’s coast since record keeping began.

Beyond real estate, damage estimates include that caused to utilities, streets, and other forms of public infrastructure. 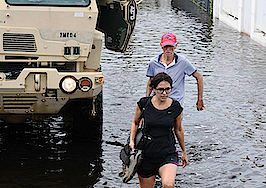