rawpixel on Unsplash
by Lew Sichelman
Share this article
You successfully shared the article.
Close

The latest J.D. Power Home Buyer/Seller Satisfaction Study found that the single most important reason for selecting a real estate company is its reputation.

Reputation matters, according to the J.D. Power 2018 Home Buyer/Seller Satisfaction Study. The survey found that the single most important reason for selecting a real estate company was its reputation. It was the most important factor for 44 percent of first-time sellers and 39 percent among first-time buyers, outweighing both personal recommendations and whatever past experiences they may have had with other real estate agents. 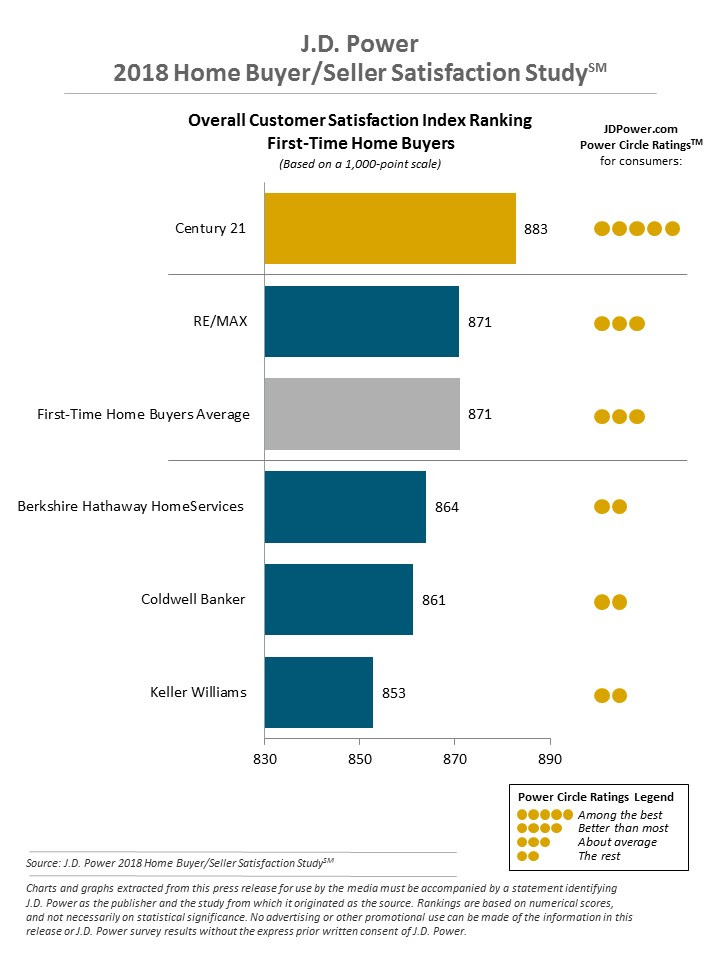 Reputation wasn’t as key the second and third times around for sellers and buyers, but it was still important, ranking second for repeat sellers (28 percent) and repeat buyers (23 percent) as the main reason for choosing a particular firm.

As also found in recent studies of the mortgage business by the Costa Mesa, California-based marketing and information, digital is playing an increasing role in the realty sector. And the major franchises are shifting more and more in that direction, Craig Martin, senior director of financial services at J.D. Power, said.

“The challenge for these companies is to consistently demonstrate and communicate their value to current and future companies,” Martin said. “Those which ensure trust and understanding are at the center of their client and customer strategies will truly differentiate (themselves) from both traditional competition and those attempting to disrupt the industry.” 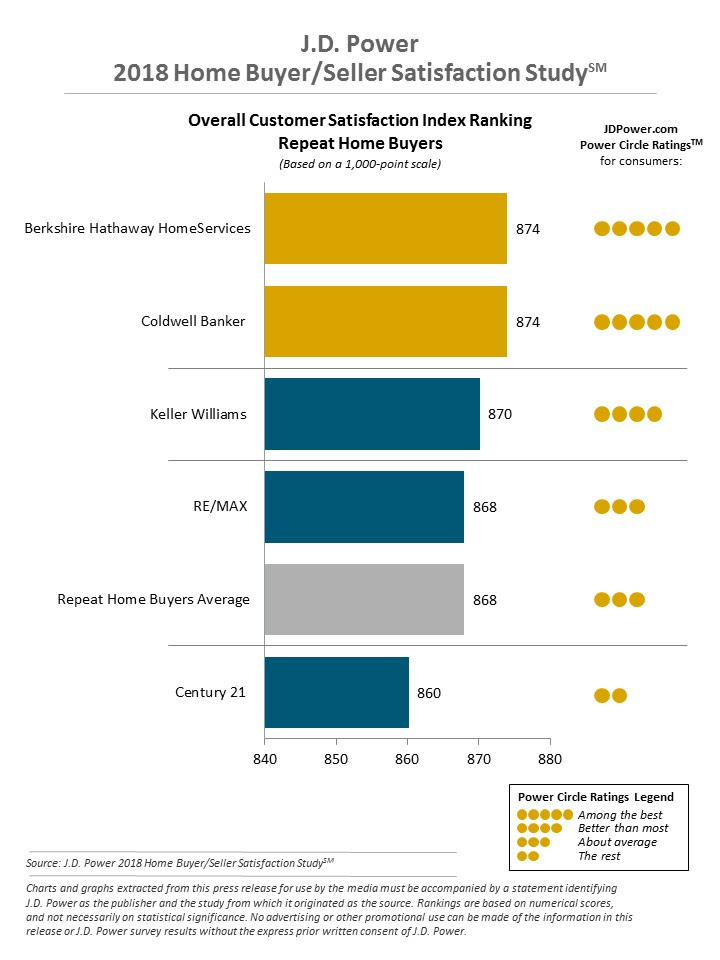 The 2018 study includes more than 4,000 evaluations from 3,332 customers who bought and/or sold a house between March 2017 and April 2018. But it rated only the five largest real estate franchise operations because, unlike local and regional firms, they have a nationwide footprint.

What people want in an agent

Now in its 11th year, the 2018 study measured satisfaction levels in four areas: the respondent’s agent/salesperson, the company’s office, the closing process and the variety of additional services. Then it tracked these factors on a 1,000-point scale. The company does not release its entire survey or findings to the media or the public. 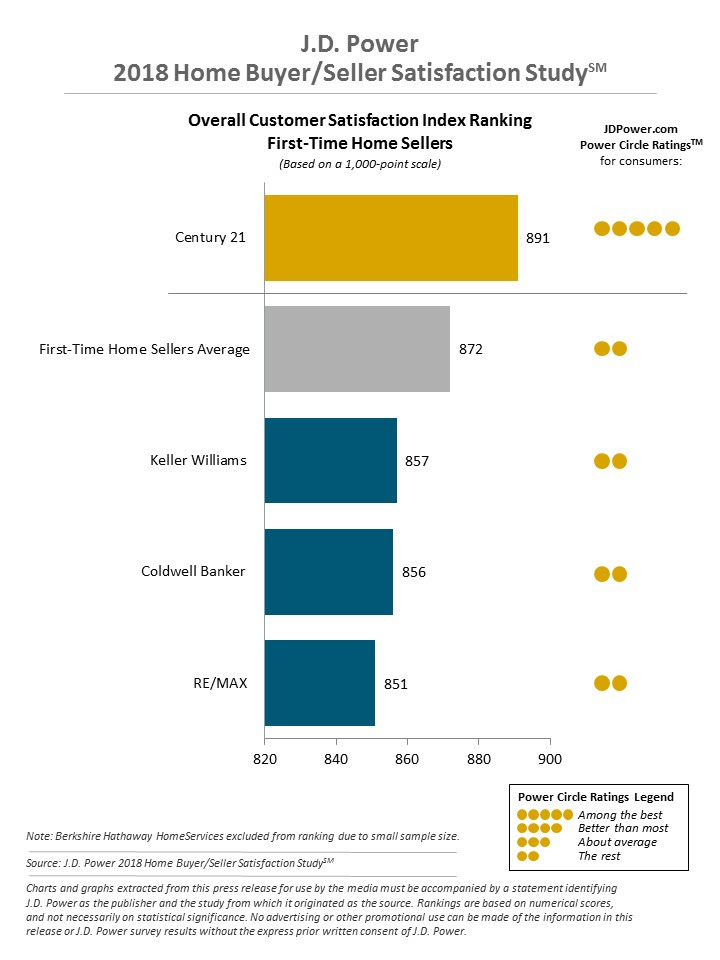 Also among its findings, more experienced buyers and sellers are forgoing agents, at least until they find a house or two online that peaks their interest. They’re using the Internet to search inventory, bypassing agents who still expect to help buyers find houses via the more traditional route.

It found that a “significant” majority – 88 percent – of buyers began their house hunt before selecting an agent. And a healthy minority of move-up buyers and sellers – 19 percent of buyers and 14 percent of sellers – did not use an agent at all.

Successful agents still play a critical role, though, by guiding customers through the cumbersome and challenging buying and selling processes, the survey also found. 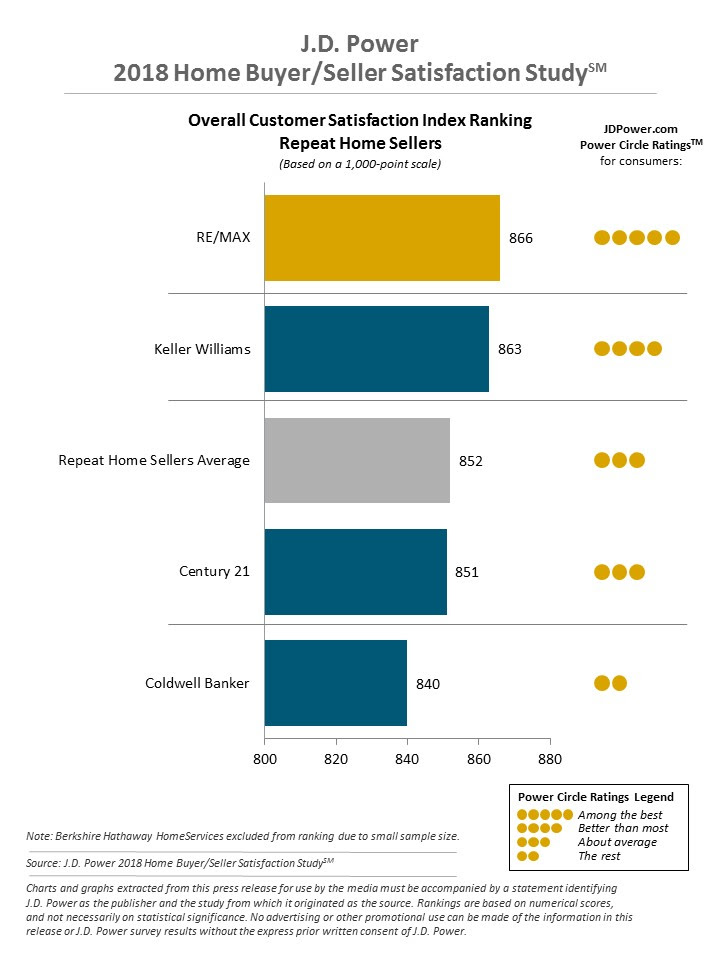 Among both buyers and sellers, over all satisfaction scores are roughly 100 points higher when agents provide timely responses to questions, keep customers informed about key points in the transaction and share comparable properties.

When looking to hook up with a particular agent, 47 percent of buyers and 55 percent of sellers said they use social media. And in each case, the majority were “delighted” with their final choices, giving them a satisfaction rate of 900 or higher.

RE/MAX was second with first-time buyers with a score of 871, which was the average for that category. And it was tops among repeat sellers with a 866 ranking.

Among repeat buyers, Berkshire Hathaway HomeServices and Coldwell Banker tied for the top spot with an 874 score. 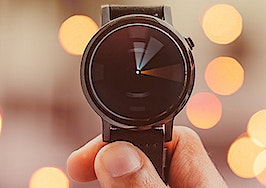 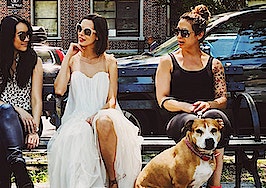