Every thought in President Trump’s tweets against the European Central Bank’s actions is mistaken, which markets and businesses understand. They also understand that these tweets have no effect on Fed decisions. However, the erroneous content is worrisome because he does directly control trade and tariff negotiations and a lot of other financial policy.

In this past week, bond and mortgage yields have almost entirely reversed the global panic at the beginning of August. The all-important 10-year Treasury note is 1.88 percent today, only 0.13 percent below the start of panic and 0.40 percent above the bottom nine days ago. As is typical, mortgages fell less and have risen less — now near 4 percent.

Why? That’s easy: For the first time in five years a full moon and Friday the 13th.

The perversity in all of this has been astronomical: The European Central Bank added heavily to stimulus on Thursday, but as repeatedly both there and here, when central banks add stimulus, markets assume that the stimulus will work and economies will do better or at least not fall apart. In August, global bonds priced for falling apart.

This panic was centered overseas, and the yield on German 10-year government bond has tracked ours — or vice-versa — in convergence.

All of the patterns creating the panic are still in play, but for panic to continue and drop rates again, markets need to see actual economic damage.

If, in weeks and months ahead, there is no trade deal and overseas economies continue to weaken, and if there is any sign of contagion in the U.S, rates will decline again.

The Federal Reserve will ease the fed funds rate next week, but the quarter-point cut from 2.25 percent will be a non-event; all will focus on Federal Reserve Chairman Jerome Powell’s remarks about the future. The best Fed telltale sign of where the Federal Reserve economists think the economy is going is the 2-year Treasury note (not the futures market).

Those notes have also been rebounding: They bottomed out nine days ago at 1.43 percent, indicating a three- or four-quarter-point cut from 2.25 percent by spring. The 2-year today is 1.79 percent. That’s strong evidence that the Fed’s cut next week will be followed by only one more this winter — unless and until there’s more bad global news.

At least one senior U.S. office-holder will have a volcanic response to this data and reality-based approach.

That person this week tweeted:

….The USA should always be paying the the lowest rate. No Inflation! It is only the naïveté of Jay Powell and the Federal Reserve that doesn’t allow us to do what other countries are already doing. A once in a lifetime opportunity that we are missing because of “Boneheads.”

European Central Bank, acting quickly, Cuts Rates 10 Basis Points. They are trying, and succeeding, in depreciating the Euro against the VERY strong Dollar, hurting U.S. exports…. And the Fed sits, and sits, and sits. They get paid to borrow money, while we are paying interest!

Every thought in that thread is mistaken, which markets and businesses understand. They also understand that these tweets have no effect on Fed decisions.

However, the erroneous content is worrisome because the author does directly control trade and tariff negotiations and a lot of other financial policy.

President Trump is hardly the only president to be confused about these four interlocking issues: The Fed, interest rates, currencies and trade. So are many citizens.

Thus in the few paragraphs following, I take a whack at explaining.

Note one difference between rates paid by private parties, businesses and individuals, and even states and municipalities versus the debt of national governments (“sovereigns”): Rates on private IOUs reflect risk of default in addition to inflation, but default on sovereign bonds always means inflation, that one risk alone.

The Fed and other central banks have limited ability to control markets. The Fed can cushion landings, or cool too-hot expansions, but cannot make water run uphill. If rates are too low, inflation will take off; if the rates are too high, inflation will fall  — but into an economic crater.

Currencies are slippery because of circular forces. All currency values are relative to other currencies! So, if the dollar appears to rise versus the euro, is that dollar strength or euro weakness?

Remember the three laws of currencies: First, in the short run, currencies diverge based on local interest rates. If there are higher rates in one place, they money flows there. Central bank adjustments to rates do cause changes in currency values, but only in the short term.

Second, in the medium term currencies follow inflation, as do rates in a continuous pirouette. However, nations tend to have durable inflation cultures. From World War II onward, the Deutsch Mark and Swiss Franc rose versus all European currencies because of cultures favoring exceedingly low inflation.

Since Germany ultimately controls money in the Eurozone, the euro is a low-inflation and low interest-rate currency, but inflation mania also causes the suppressed Eurozone economy.

In the long run, currencies diverge based on trade imbalances. Do everything right — as Germany and China see it — and the result is low inflation, proper interest rates, and a trade surplus, and your currency will rise so much that consumers in other nations cannot afford your products. Stop running a surplus and your customers can stay in business with you.

Governments have tried for many centuries to find ways around these laws, or to ignore them, especially the third one. China expects to sell anything it wants anywhere, but to limit imports and non-Chinese business inside China.

The same impulses killed Japan; China has 11-times Japan’s population and has correspondingly larger effect on the other prisoners. Germany has the fantastic benefit of a euro far undervalued relative to its trade surplus, the euro held so low by wreckage elsewhere in Europe.

“Mercantilist” efforts to run surpluses in rigged games always fail, no matter how assisted by corrupted central banking — fail quickly, slowly, quietly or spectacularly. Trade must be a partnership. The most disturbing aspect of failure is that everybody loses, not just the miscreant.

If the last week seems violent, the 10-year is within inches of breaking the downtrend since last November. Break that, and there’s another half-percent up from here and soon. Possibly one of the perverse effects described above, in which an overly energetic Fed spooks the bond market and counteracts its own easing by pushing up mortgage rates: 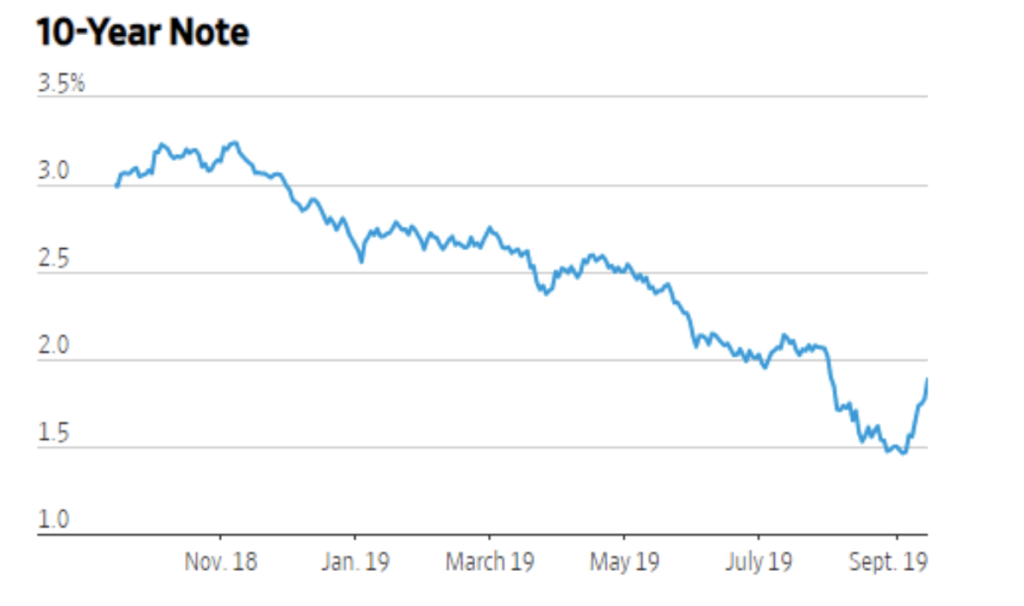 Media gave negative weight to the NFIB August survey of small business, but it was nothing more than a wobble. Business is fine: 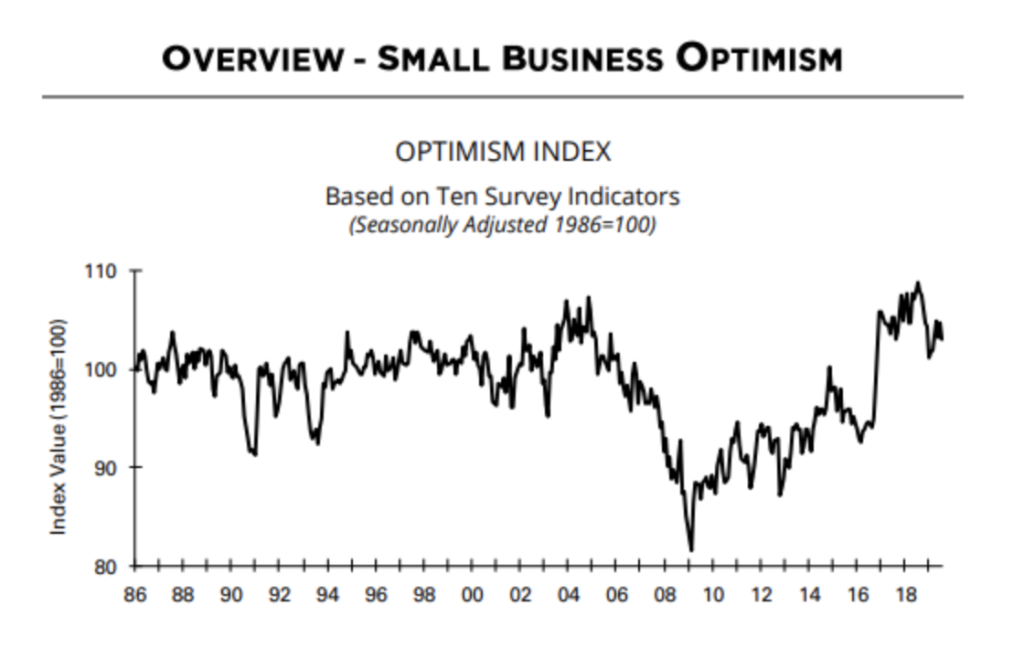 The Atlanta Fed GDP Tracker is happy, too: 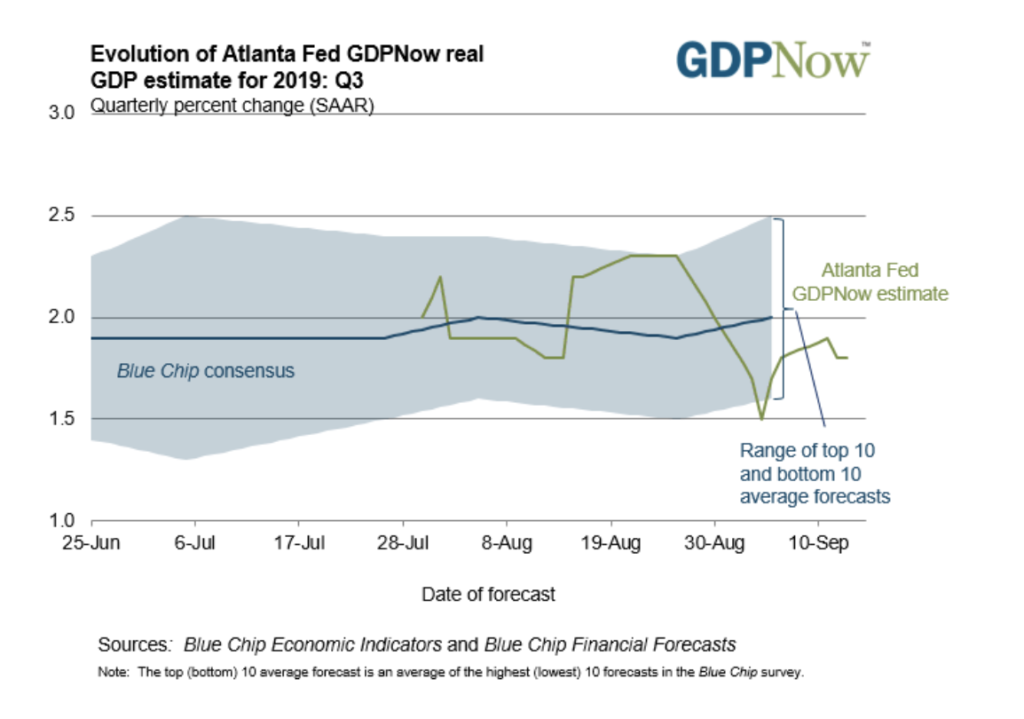