President Trump has tweeted that the “boneheads” at the Federal Reserve should lower interest rates to “zero” or “less,” but Federal Reserve Chairman Jerome Powell took a more moderate approach.

Markets calmed down this week following the extraordinary global bond-buying panic and reversal: In just six weeks the yield on the U.S. 10-year Treasury note declined to 1.77 percent, down from 2.06 percent and 1.46 percent. The Fed did cut the cost of money by a quarter of a percent but with no apparent effect on anything except the mechanicals: “Prime” is down to 5 percent, the LIBOR at 2.06 percent and ARMs adjusting down.

Mortgages have rebounded, too, but are still down and close to 4 percent, which is reassuring. During the swoop down in August, many had feared that bonds were mispricing for a Fed cut-cascade. Chairman Jerome Powell’s superbly anodyne statements made it clear there will be no cascade, not on current data, yet long-term rates have held most of the summer decline.

The top of the Fed’s new band for the cost of money is 2 percent, down a half-percent since the end of July. The 10-year Treasury note is 1.77 percent, below the cost of money. That’s an unmistakable sign of worry, which most have assumed flows from tariff and trade concerns.

The Fed does not know what to do next because no one — including Trump — knows what Trump will do next, and trade might be off the table until after China’s celebration of 70 years of Party rule. For the time being, the president is having more fun needling California (and it’s hitting back).

Global long-term rates as low as they are — in the absence of new trade damage, little trade contagion in the U.S., and the Fed on hold — says that there are pervasive worries about structural issues China-Japan-Eurozone that will continue to hold rates down.

Here are the things not to worry about:

First, Iran’s missile volley at the Saudis, which is an act of war. But no one over there wants to respond with more war: Oil is thicker than blood. Plink and pirate some tankers, entertain the masses and loons with Kim-fun rocketry, but don’t do anything to disrupt money for oil.

Next, the U.S. economic data is OK. Certainly there’s some trade pain in spots, but we are adapting — and so are offshore supply chains. The financial press aches to find ugly stories about housing, and in a shortage, creates them.

Sales of existing homes rose 2.6 percent in the last year, and inventory for sale fell by the same amount, down to four months’ inventory nationwide. Any slowdown in sales is due to inventory shortage, and that was caused by land shortage where the demand is: Urban areas.

New construction might at last pick up as cities rezone (painful and slow politics), new starts are up 12.3 percent in August.

Then the Fed. Most civilians think of the Fed as a cloister, the person in the chair, the top monk. Sort of like the Supreme Court, but just one chairperson. Inside, sub-monks and acolytes quietly study mathematic models of the economy and write incomprehensible scripture.

Eight times each year the chair appears in a window to read from a scroll, twice formally before Congress, and responds to financial crisis as rarely as possible.

Each chair carries the weight of the whole global economy, while in the most dignified manner concealing unruly and incompetent behavior by Fed officials only marginally under the control of the chair.

Just this week … oh, my. Another Trumpian assault (“Jay Powell and the Federal Reserve Fail Again. No ‘guts,’ no sense, no vision! A terrible communicator!”), but even Trump seems to be learning who is diminished by them. Consider the internal issues facing the chair.

“The Fed” is a group of seven governors appointed by the president and confirmed by Congress, together with the presidents of the 12 regional Feds. The regionals are antiques appropriate to 1912, each with its own self-perpetuating board that selects a president, who then selects board members.

The D.C. Fed can veto individuals, and there are many dedicated volunteers serving, but also many unqualified and serving more for ego or narrow economic bias.

Five regional bank presidents sit on the rate-setting committee; always the New York Fed because of its extraordinary duty to watch markets, and four of the other eleven regionals rotating annually. This week, three of those four decided to disagree publicly with the committee majority and, of course, with the chair.

One of the three, Eric Rosengren of Boston has a good track record, especially in 2008, but his objection to both of the Fed’s quarter-point cuts this summer is based on the old worry of overheating and instability, which always has a foundation in too much or too easy credit, neither of which are the case today.

The second dissenter against both cuts has been Esther George of Kansas City, the successor to Thomas Hoenig who together cast the most numerous dissents of any regional in a record of continuous error over 28 years always in favor of tighter money and always proven mistaken by subsequent events.

That’s bad, but the third dissent in favor of a half-percent cut was disgraceful. James Bullard of St. Louis has repeatedly during the height of Trump’s Fed-fury argued in public for easier policy than anyone else at the Fed and said how much he would like to be the chair.

One more internal adventure this week has made the chair’s chair feel unsteady. The “money markets” ran low on money, a highly technical plumbing issue which the Fed knows how to fix and which does not signify trouble in the broader system or markets. (Long-term money trades in “credit” or “capital” markets.) Nevertheless, the chair is uneasy when overnight money trades at 9 percent when the Fed has just cut the formal peg to 2 percent.

One aspect of the adventure is so far unresolved in public. Why was the New York Fed surprised by backed-up plumbing? Managing money is its job. The Fed’s trading desks are in New York, the ones seamlessly conducting quantitative easing. Everyone can be surprised, but the NY Fed is the early warning radar for the whole system.

There may be nothing to the adventure except surprise, but there may be something juicy. Prior NY Fed presidents have included the extremely able Paul Volcker, Bill McDonough and Gerry Corrigan. Bill Dudley did a fine job through the crisis, only to lose his mind after leaving office and tangling with Trump.

Only hapless Tim Geithner mars the record, until perhaps now. John Williams is president now, has looked to me like a Peter-principled careerist, and in his year on the job has so badly bungled in public speech that he no longer speaks. The key person in this money market upset has been silent.

So, when you see Powell speak and think about his actions, consider also his surroundings inside the Fed. He and his predecessors are heroes.

The 10-year Treasury note in the past year, steady for the moment. Panic down and counterpanic back up, but we did not break the year-long decline. Maybe more ahead, Fed or no Fed: 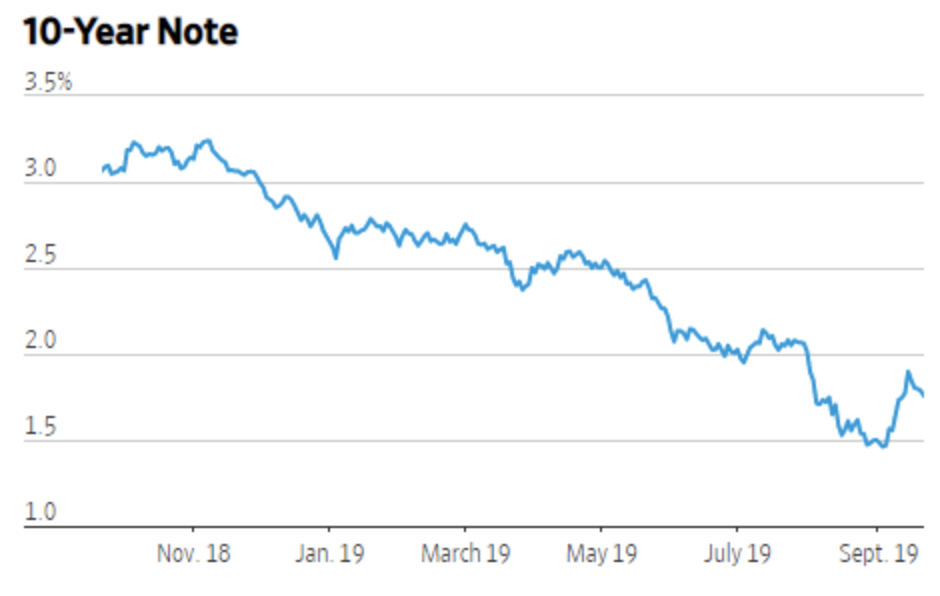 The Fed’s “damned little dots,” one cast by each governor and regional Fed president for the location of the cost of money at the end of each year. Taken literally, the Fed has no intention of doing anything ever again. Do not take these dots literally. 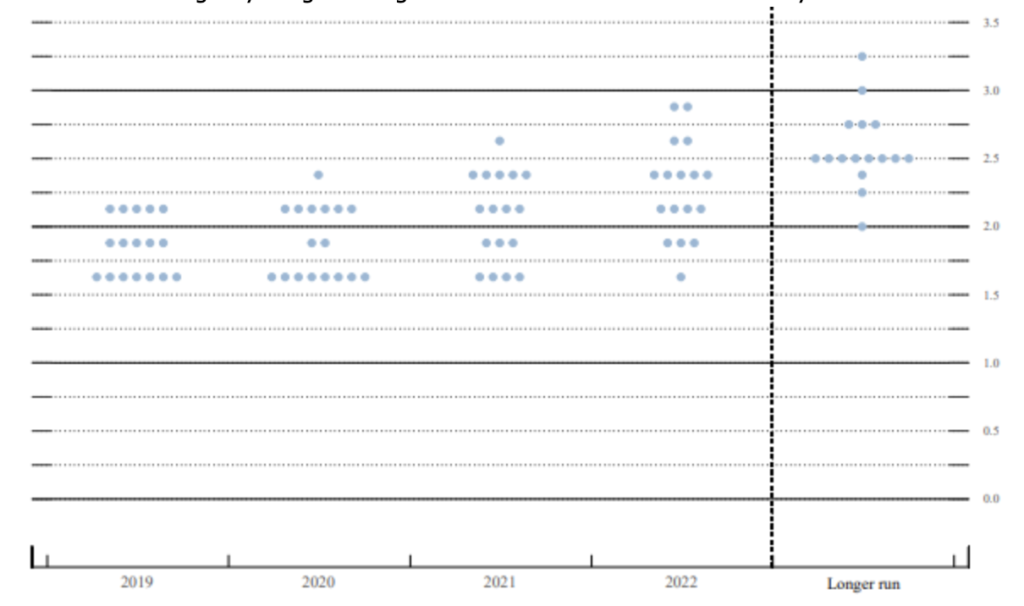 The Atlanta GDP tracker is just fine. The Fed is correct to go on hold: 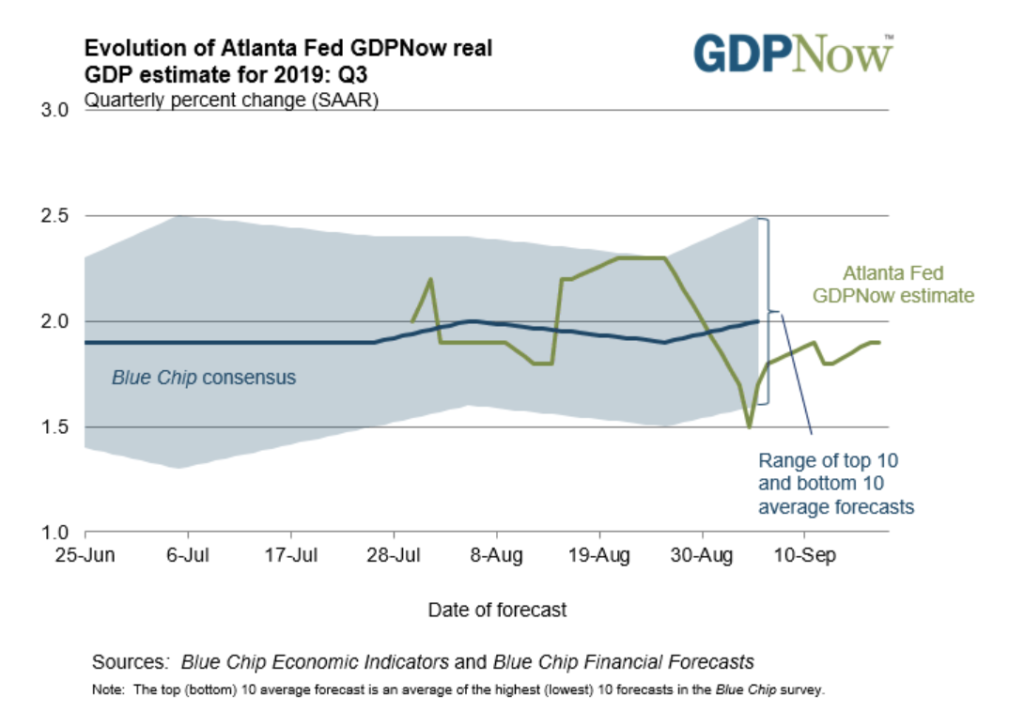 Buyers viewed a record low number of homes before purchasing in 2021
Back to top
Keep up-to-date on tools and tactics to impress your clients and outshine your competition with the 2022 virtual bundle.Register Now×
Agent Appreciation Sale: Inman Select for only $85.CLAIM OFFER×
Inmanpot
Log in
If you created your account with Google or Facebook
Don't have an account?
Create an Account
Forgot your password?
No Problem