Markets are preoccupied with tariffs and are trading on Brexit, and they really shouldn’t bother.

The idea in this column each week is to find the center of probability as it seems at the time and bracket near-term future outcomes while avoiding predictions.

It shouldn’t be that hard to do, but civilians are bombarded by a media universe, which has gone tabloid — not fake news as in manufactured, but rather distorted to attract your attention. Even professionals in markets are struggling to find the reasonable in the hurricane of alarmism.

Interest rates this week reacted to new events and data, but markets in no way resolved the effects of tariffs: Economic slowing ahead and rates farther down, or resilience and the rate-drop thus far overdone?

Thursday marked a reversal in expectations of slow and down: Trade talks with China will resume, China’s reaction to Hong Kong rebellion cooled, and Brexit, if it happens will, be delayed and negotiated.

Since Aug. 1, bond market internal mechanics have been driven by overseas panic-buying, which has forced others to buy. The 10-year T-note has been in the 150s since mid-August, time for panic and forced buyers to wash out.

Meanwhile the horde of refinancers act as bond sellers into a quieter market, pushing rates up. In the case of jumbo loans clear above 4 percent, that narrow market with indigestion, but basic Fannie loans little above 3.5 percent

(Sidebar: Speaking of Fannie, the administration’s plan to privatize the mortgage agencies is just noise. Their regulator, government-hater Mark Calabria, might do some harm by executive order, but that’s it.)

The flow of economic data is not weak enough to push rates lower or even to stay as low as we are. The purchasing managers’ manufacturing survey for August fell below 50 (49.1) indicating minor contraction, but for the third time in this recovery.

The survey of the vastly larger service sector (think Google, not burger-flipping) rose nicely from 53.7 to 56.4, joined by orders to factories and for durable goods. Auto sales are steady at a high level near 17 million annually and up 0.7 percent year-over-year.

All of that on Thursday pushed the 10-year to 1.6 percent, a crucial level, but on Friday right back down to 1.54 percent on news of lower job creation in August.

Contrary to most headlines, there is nothing wrong with a gain of 105,000 jobs, unemployment steady at 3.7 percent, and average hourly earnings up 3.2 percent year-over-year. The Fed has hoped for years for a slowdown under 100,000 monthly from numbers nearly double that. The slowdown announced today is meaningless until (and if) the months ahead slow further and go negative.

Now back away, examine the forest. High-intensity trade combat is doing damage overseas, but hard to separate from long-term predatory imbalances in the behavior of Germany and China.

Tariffs thus far are more of a shove from behind to people already stumbling, than an Acme safe falling from blue sky on Wiley Coyote.

Even more puzzling, what is the linkage from trade combat back to harm to the U.S.?

Some small losses of jobs, farmers and a few manufacturers hurt, but offset by huge, non-Fed stimulus: a $1 trillion budget deficit and long-term rates almost a percentage point lower than when the Fed first began to tighten in 2015.

The new tariffs might push up consumer prices, but the Fed has been trying to do that for 11 years.

There is no sign of credit distress anywhere in trading of U.S. corporate, municipal, consumer or mortgage debt. The stock market might be vulnerable, in that at least half of its earnings are derived overseas.

If stocks fall into an open manhole, the wealth effect will run in reverse. But U.S. global trade still runs hot — hot for us, the smallest component of any developed economy — import-export volumes and deficits stable since the end of 2017.

The European Central Bank (ECB) meets next week on Thursday, the Fed the week after on Sept. 18. 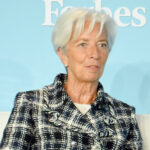 The ECB is expected to do more of what it has done, which some say has not worked, but nobody wants to try life without. This winter the most important person on earth might be Christine Lagarde, who on Nov. 1 will replace Mario Draghi as ECB president.

She is the only person on the scene with the wisdom, political skill and determination to convince Germany not to destroy Europe. Meanwhile, more of the same and German 10s at minus-0.63 percent.

Why would anyone buy that deal? Because, when the euro fails, German bonds will be paid in neu deutschemarks, which will soar in value and offset interest lost.

The Fed will cut 0.25 percent at its meeting, but against substantial internal opposition. Eric Rosengren, president of the Boston Fed and one of the best of all Fed people, is deeply dug in against these cuts. His Tuesday speech is short, eloquent and hard to argue with.

Brexit is the worst-reported financial event in memory. Johnson is not an ogre with horns growing out of his head who’s destroying British democracy. He is the one person who wants the people to decide. 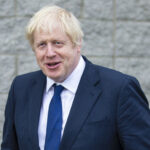 His own party, the Conservatives (Tories), after three years of hard-Brexit bluster, folded this week. The primary opponent of a new election is the awful Jeremy Corbyn, the labor leader angling for prime minister without an election in hopes of negotiating Brexit his way. Britain needs an all-out debate about its economic future, and it will get one. Markets are trading on Brexit, and they really shouldn’t bother.

Markets should be watching (and are not): Japan is scheduled to increase its national sales tax from 8 percent to 10 percent in October, in the hopeless pretense of fiscal stability. The scheduled increase is already pulling future demand into the present, guaranteeing an air pocket after taking effect, another downward force on global rates.

Markets are preoccupied with tariffs, but that future is completely unpredictable. Just like hurricanes in Alabama.

The 10-year T-note in the past five years: 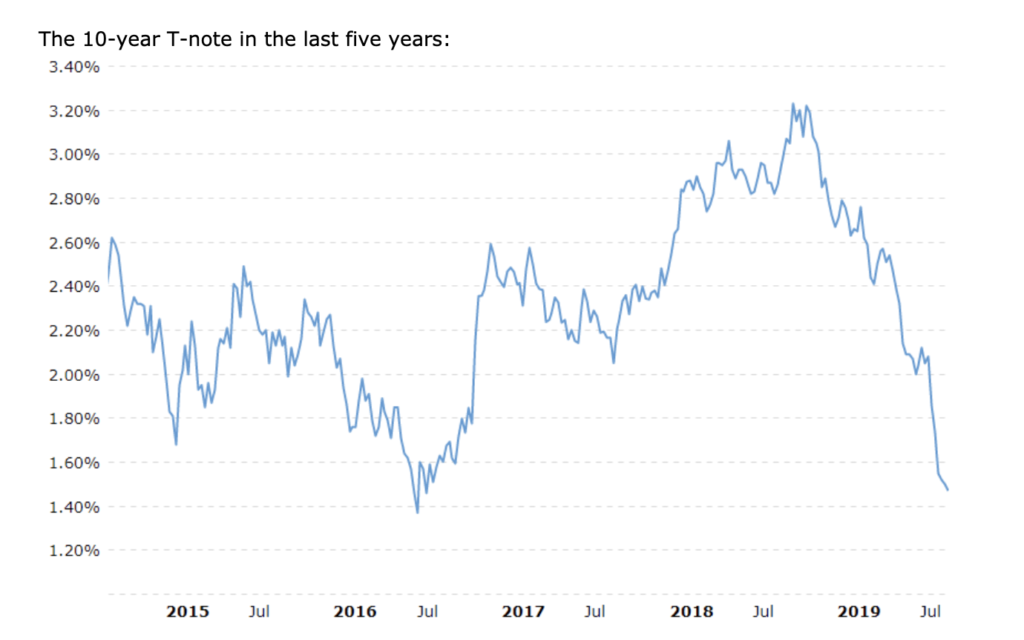 The Atlanta Fed GDP tracker has changed, but not yet a trend. If it drops below 1 percent for Q3 for structural reasons (consumer cave-in, job loss), then rates will resume their decline: 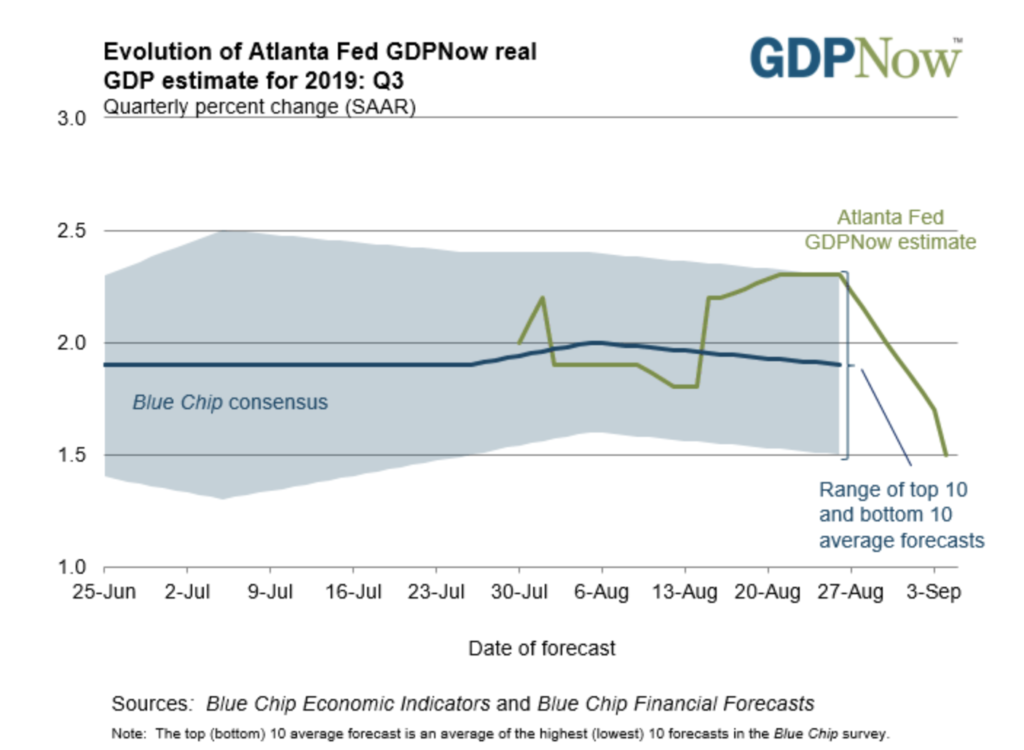 The ECRI is stuck, which is just fine: 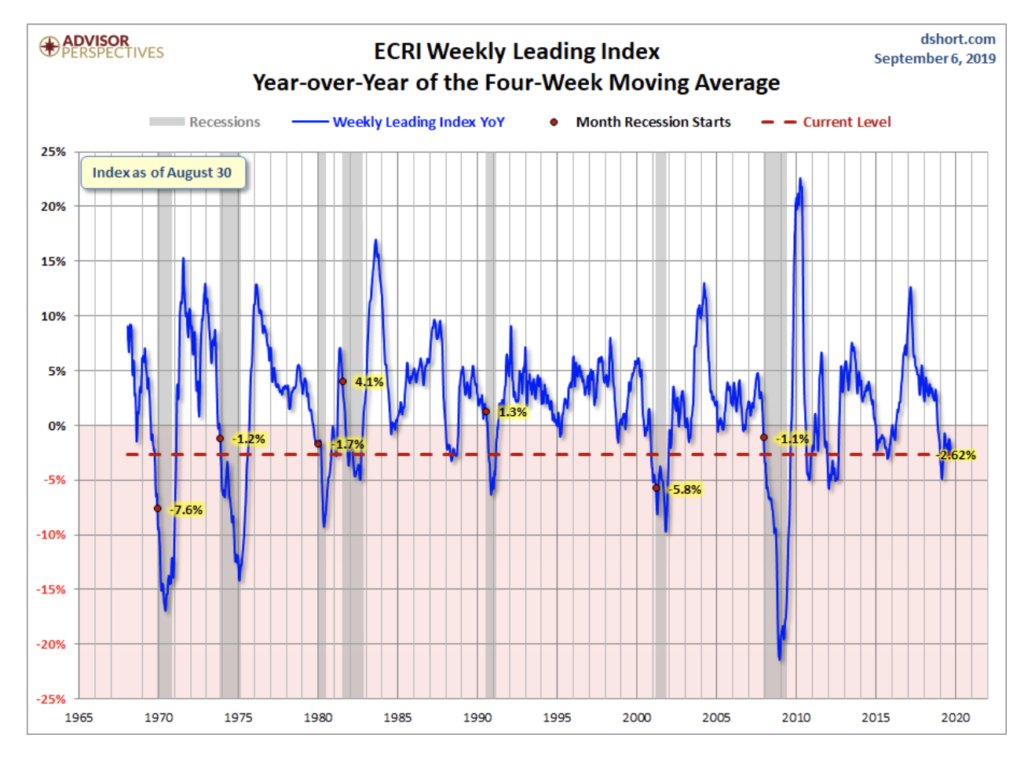 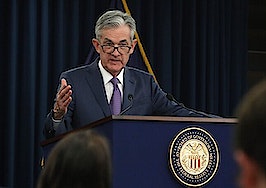 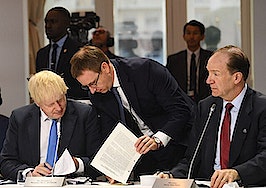