Long-term rates have stayed in a narrow range for anther week, mortgages still close to 4.00 percent. However, two developing patterns suggest changes ahead, although information wars make it increasingly hard to understand anything.

Long-term rates have stayed in a narrow range for anther week, mortgages still close to 4.00 percent. However, two developing patterns suggest changes ahead, although information wars make it increasingly hard to understand anything.

First the data: The Fed’s meeting is next Wednesday and October payroll data publishes next Friday.

Regarding the information wars: The Wall Street Journal this week featured a headline that blared “Housing Market Stalls In September.” Fans of the stock market don’t much care for housing. It is true that September’s sales of existing homes were about the same as August, but they were 3.9 percent higher than September 2018 — quite an accomplishment as inventory for sale fell another 2.7 percent in September alone. Sales of new single-family homes were also about the same as August, but 15.5 percent above September 2018. Please, could we have more stalls like this?

Orders for durable goods are a telltale for business investment and future productivity and growth. Alarmists were pleased by the 1.1 percent drop in September, but headlines again ignored the strong summer for these orders, and the concentration of the decline in the transportation category — all but point-one percent of the drop. “Transportation” among other things means Boeing (going the way of Wells Fargo, Volkswagen and Deutschebank), and the GM strike.

The economy does appear to be slowing, maybe from the 2.0 percent area to 1.5 percent but the key markers like jobs and housing are still solid. The trade war is still doing its damage, mostly overseas but some here.

The first of two patterns mentioned above: The 10-year Treasury note has a bad chart problem. From its double-top last October-November at 3.25 percent it fell in a straight line to September’s double-bottom at 1.55 percent. Those double-patterns are one of the simplest but best signals of market turns. And the double-bottom last month now coincides with a break in the straight-line trend. Straight lines are also powerful, but with a circular quirk: To retain momentum they must continue. The market is in the process right now of breaking the trend line, at 1.80 percent. The 10-year is not up a lot, but enough to end the trend of continuous decline.

A broken trend leaves us vulnerable to a rise in rates if only because traders all read the same charts, and if we’re not going down, we’re going up.

Further circularity: Is the trend breaking because the Fed is about to stop cutting, or because the bond market overshot the Fed’s intentions? That question is pure misery for the Fed. Take out some more insurance, cut one more time but signal that’s it unless the economy sinks? The stock market has touched a new-record high despite poor corporate earnings, and some at the Fed worry about inflating a bubble. We’ll learn the market’s true leaning in the reaction to the Fed meeting, but odds say we’ll be lucky if mortgages stay where they are.

The Fed’s overnight cost of money is pegged in a band 1.75 percent to 2.00 percent. The Fed-sensitive 2-year T-note is 1.64 percent, saying maybe a cut and maybe not. Why buy a 10-year Treasury to get a yield available by risking only overnight? Buying makes sense if you think rates will fall — not necessarily now, but in a few months to a year.

Why would long-term rates fall next year? Here in the U.S. because of weirdness in housing: prices are high and property scarce where demand is (urban and ex-urban) and vulnerable to any rate rise. In the countryside housing is anything but hot, and so also at risk.

The second pattern mentioned above: Overseas trouble, but with another weird twist. Europe is in deepening trouble, so why the sudden jump in long-term rates there? In the last month German 10s have risen from minus-0.70 percent to minus 0.36 percent and in a sustained trend, not a wobble.

New European Union data is indeed sinking. Note to confusing terms: In the early 1970s the US National Association of Purchasing Management began to survey itself monthly, known as NAPM but generically PMI for purchasing managers’ index. To lose everyone, NAPM changed its name to the Institute of Supply Management, ISM. These PMI surveys have been such accurate descriptions of the economy that we now get generic PMIs for all developed nations and regions.

For the whole EU in October, the manufacturing PMI was expected to recover but stayed at 45.7 (44 is recession level, 50 a break-even economy), although the service sector is still above water at 51.8. Germany alone: 41.9 and 51.2, respectively, and note that in export-dependent Europe manufacturing is a larger sector than in the US.

Connect the dots. Mario Draghi this week had his last meeting as the European Central Bank president. His experiment with negative rates has dead-ended —  it was worth a try and is working at marginal negatives but will not go lower. The German rate-rise is a rebound from expectations for a deeper negative ECB. Draghi’s successor Christine Lagarde will make a big push, a herculean shove to get the Germans to stop budget-surplus mania and to spend and borrow, and the ECB will buy the bonds. Eurozone inflation is running about half the 2% target.

Hunches bordering on wild swings … Lagarde will appear to make progress, and rates there and here will rise in optimism which will prove unfounded. A paralyzed White House will be unable to make trade war worse or reverse the damage. China digging in to President Xi Jinping’s vision of empire will hurt everyone including itself. These external forces will encourage the Fed to cut and to make easy noises.

The chart patterns in the copy above are clear. Our best hope for mortgages in the near term: Stay put. Markets tend not to stay put, and respond to trend change with volatility: 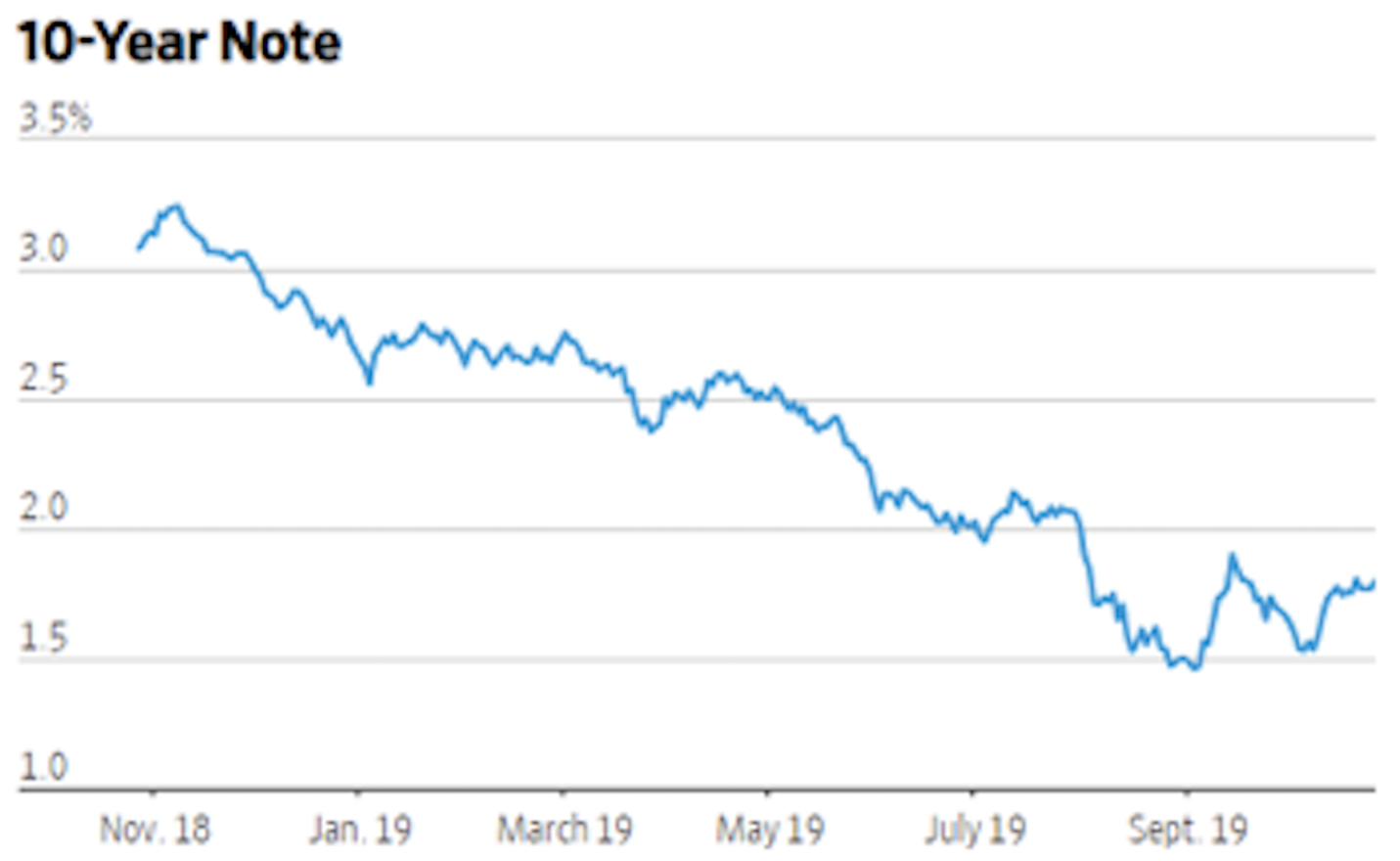 The Atlanta Fed GDP tracker could not be steadier. As soon as the BEA releases its first GDP report for the 3rd quarter, Atlanta will begin to forecast the 4th: 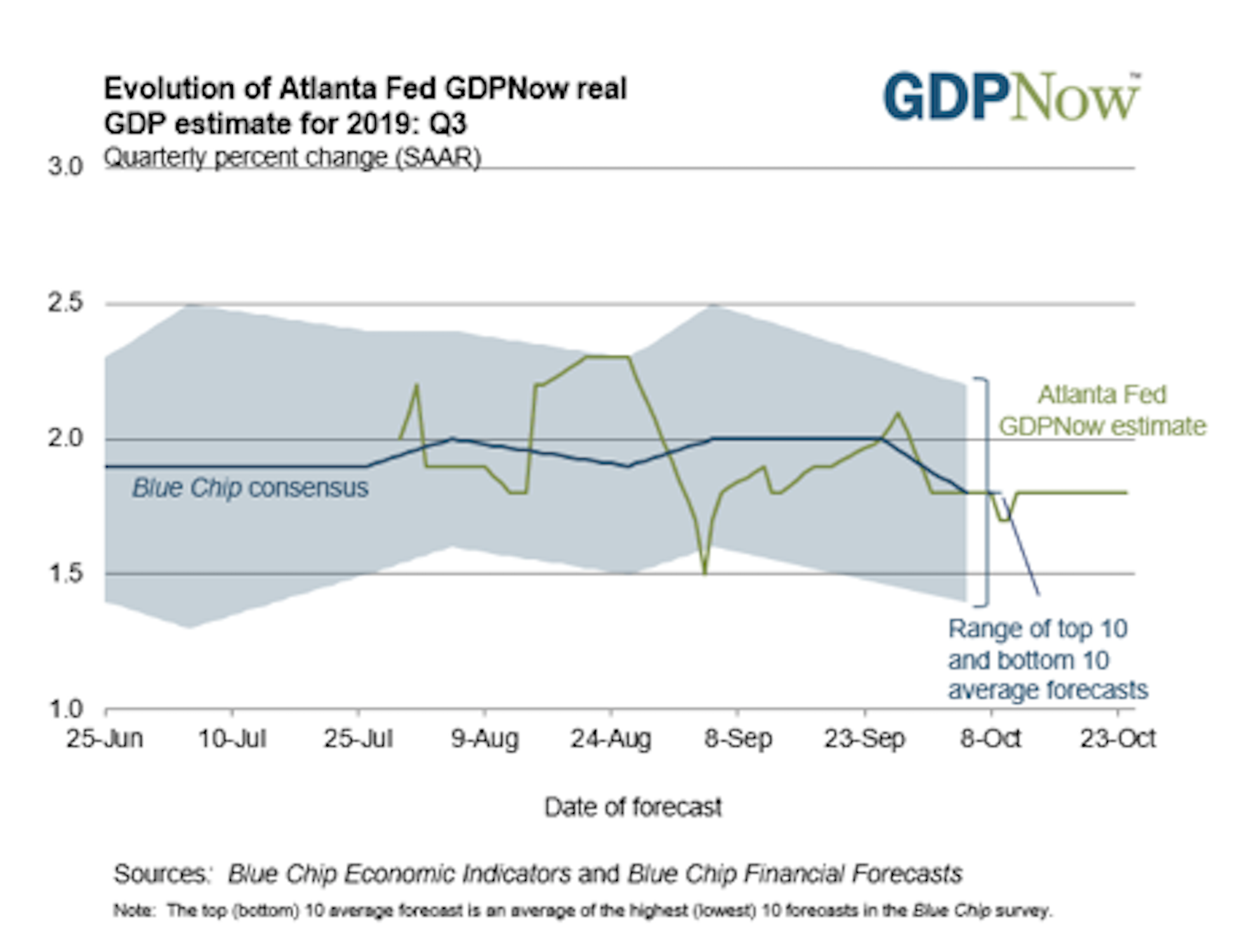