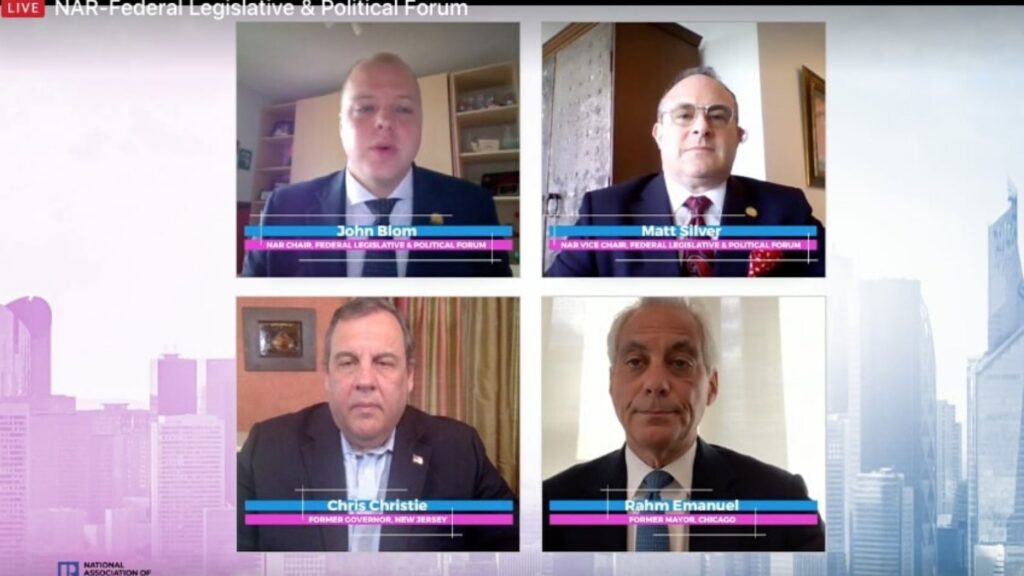 During a forum at the Virtual Realtors Legislative Meetings Tuesday, Chris Christie and Rahm Emanuel agreed COVID-19 has upended expectations for the fates of the White House and Congress come November.

President Donald Trump’s handling of the coronavirus pandemic will determine whether or not Americans choose to re-elect him, political leaders Chris Christie and Rahm Emanuel said during a forum at the Virtual Realtors Legislative Meetings Tuesday.

Christie, a Republican and the 55th governor of New Jersey, and Emanuel, a Democrat and the 55th mayor of Chicago, addressed attendees of the Federal Legislative and Political Forum of the National Association of Realtors’ first-ever virtual midyear conference. Two-thirds of its sessions are closed to nearly all NAR members and press, but the 1.4 million-member trade group is streaming some sessions, including the forum.

Emanuel and Christie each gave a nod to the vital role of Realtors and homeownership in the nation’s economy as they answered questions from the forum chair and vice chair, but spent most of the session discussing the upcoming presidential election. Both agreed that the pandemic had changed the political landscape, not only for the White House, but for Congress as well. 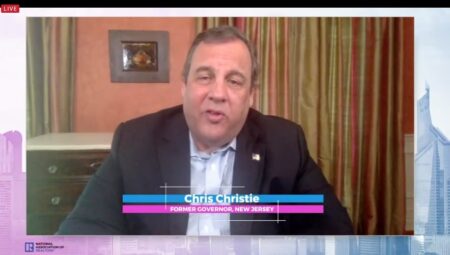 Christie remarked that before mid-to-late February he thought Trump was headed towards being a “prohibitive favorite” to win the election even after being impeached and questions about his relationships to Russia and Ukraine lingered.

“I don’t think any of those issues matter anymore. I think the only issue that matters anymore is his response to the coronavirus epidemic and going forward [his] plans to continue to keep Americans safe and restore the American way of life. This has become a referendum on President Trump,” Christie said.

“He will be judged up or down based on how the American people feel he has handled this crisis,” Christie added.

He opined that the crisis had helped former Vice President Joe Biden in the sense that Biden was staying out of sight and people’s attention is on the president.

When it was his turn to speak, Emanuel joked that he was having an “out of body experience” because he was actually agreeing with Christie.

“At the end of the day, while the virus was not predictable … it is a referendum on [Trump’s] stewardship,” Emanuel said.

“If we have in the fall a second surge of the pandemic, he’s going to get judged that way. Because he’s clearly rushing the country at this point. He is pushing for that opening.” 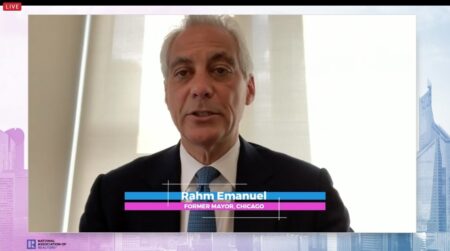 Emanuel said he thought Biden was doing the right thing by staying home for now because Trump is a “good counter-puncher and that’s how he creates the narrative that he wants.”

Right now, “this is a race of Trump versus Trump and Trump’s losing that race,” Emanuel said.

Both Emanuel and Christie believe the presidential election will impact down-ballot races. It’s much less likely that the Republicans will retake the House of Representatives, according to Christie. The Senate is now more competitive and will go where the White House goes, according to Emanuel. “Literally six months ago people not only thought the president was a prohibitive favorite but the Senate was gonna stay Republican. All that has been washed out by the storm of COVID-19,” he said.

Emanuel said he didn’t think the election would come down to persuadable voters or swing voters, but rather weak Trump voters versus weak Biden voters.

“The real challenge for Vice President Biden is going to be … to prove he’s an acceptable alternative [to Trump],” Christie said.

“I would argue that in some of his early campaigning he has not really shown that ability. I hope for his sake that he’s honing his skills. Because Rahm is right that [Trump’s] an excellent counter-puncher. To the extent that Joe Biden gives him any room to show that he’s not an acceptable alternative, the president will be able to effectively do that.”

Emanuel said Biden’s strength is his empathy — a quality he said the president lacks.

“A president’s character, their judgement, is so much a part of this, not just the policy and ideas and proposals,” Emanuel said.

“Vice President Biden’s major asset is his empathy,” in part because it allows him to talk about his life in Scranton, Pennsylvania, and his family, Emanuel added.

Asked who he thought Biden would choose as his vice president, Emanuel wouldn’t give names but said that he expected Biden to pick someone who could be his partner rather than someone who will balance the ticket geographically or ideologically and essentially be “little more than window dressing.”

It will depend on who Biden feels he can listen to and is comfortable with and “that’s something only one person can vet,” Emanuel said, noting that when John McCain chose Sarah Palin as his running mate he had barely even met her and that reflected on his quality of judgment. “He was never comfortable with her,” Emanuel said.

Christie agreed that Biden would be looking for a partner, but pointed to Biden’s age as a bigger factor, as it was for McCain. What really hurt McCain is that people could not picture Palin as president, Christie said.

“The old saying of a heartbeat away becomes a lot more problematic when someone will be the oldest president ever if Joe Biden is elected,” Christie said. He said he thought Biden would choose who he likes the most. He ventured a name: “I think he’s going to pick Amy Klobuchar because I think he has a good long-term relationship with Amy from his time in the Senate and as vice president. I also think that Amy is … someone who could be seen by the American people as someone who could be president.”

Whomever is the president of the United States, his challenge will be to build on the sense of community the coronavirus outbreak has inspired, according to Emanuel.

“Crises reveal character, not just about an individual, but about a country. I’m pretty impressed with what the country’s done, the people. I don’t think anybody would have thought that the American people would step up in this way when their entire ‘way of life’ has been frozen in time,” he said.

“We’ve also rediscovered the threads of being a neighbor and part of a community. The real challenge is whether the president of the United States will be able to garner the sense of community, the rediscovered foundation of our identity and build off of that as we start to invest again in America.”