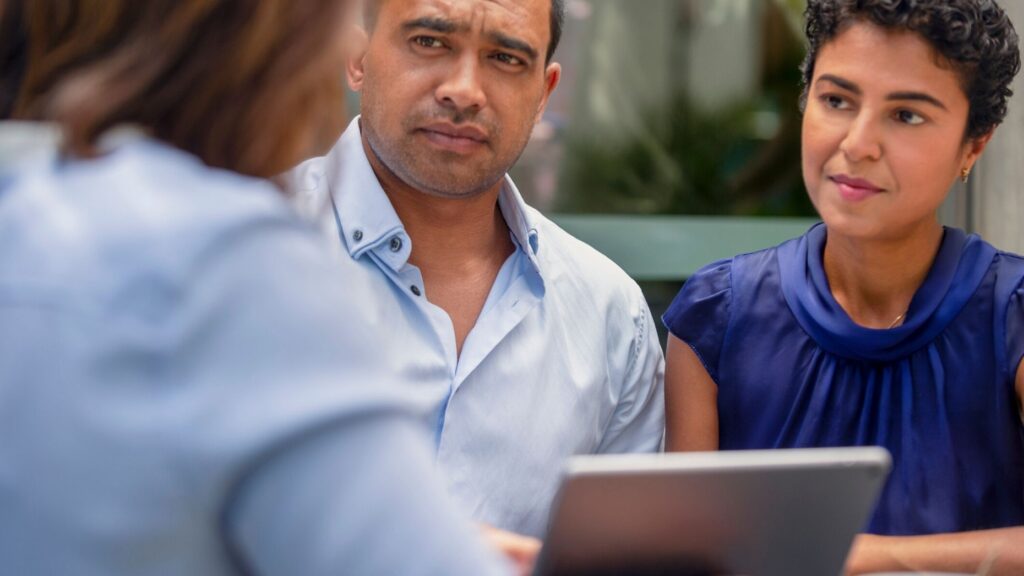 Homebuyer sentiment has changed significantly, from largely positive feelings before the start of 2020 to mostly negative ones in the ensuing months.

Homebuying has changed dramatically over the course of the coronavirus pandemic.

Along with changes to the process of physically buying a home, homebuyer sentiment has also altered significantly over the past few months, from largely positive feelings before the start of 2020 to mostly negative ones in the ensuing months. The 2020 homebuyer is more than twice as likely to feel anxiety than homebuyers who purchased in the last five years, according to a recent study by flat-fee discount brokerage Clever Real Estate. 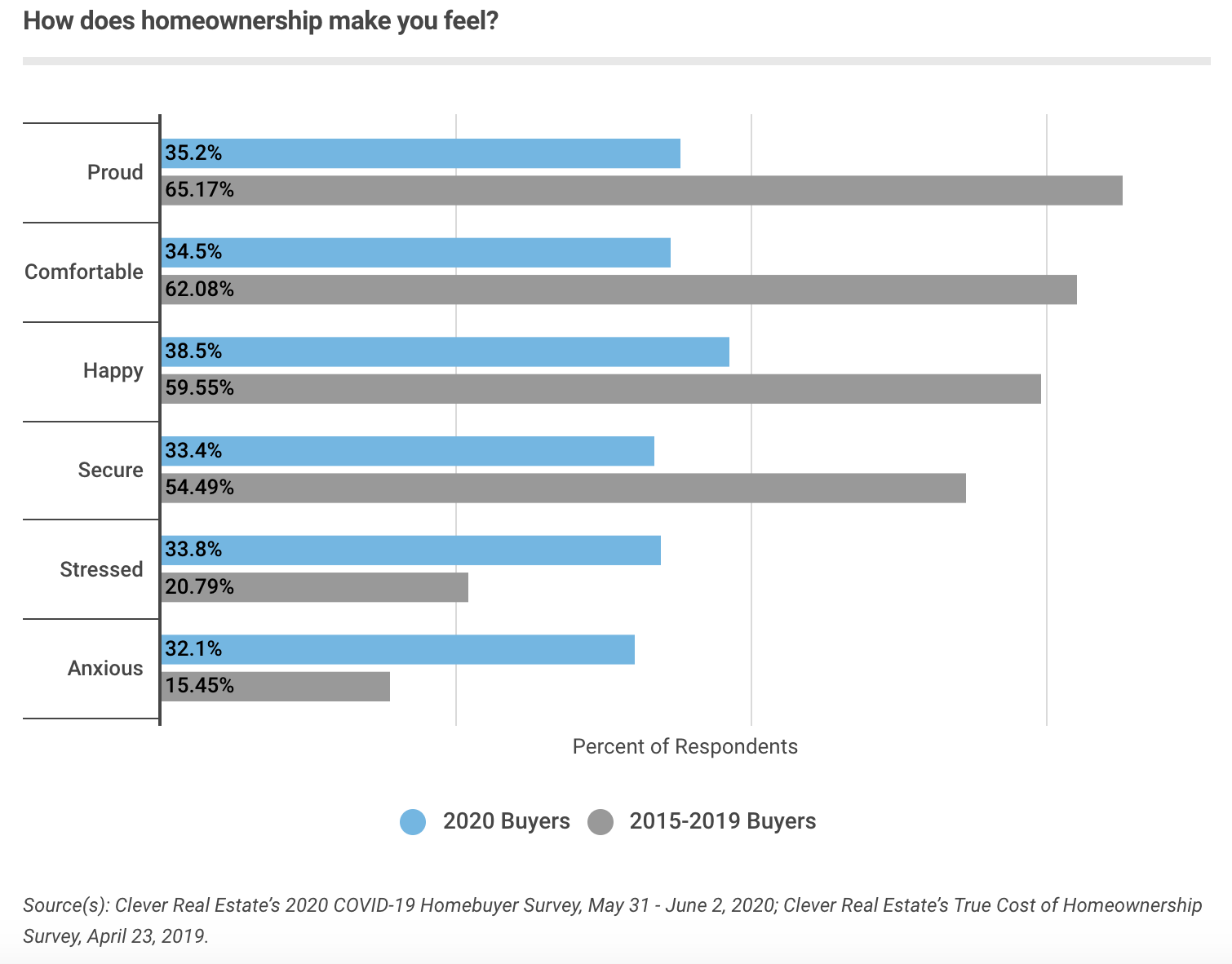 Between May 31 and June 2, Clever surveyed 1,000 homeowners who bought their home between January and May 2020 on questions regarding their current finances, mortgage and how they felt about being a homeowner.

Clever found that homebuyers from 2020 are about half as likely to feel proud or comfortable buying a home compared to homebuyers of recent years.

Not surprisingly, the pandemic has also contributed to many homebuyers feeling concerned about their financial situation. Many employers have had to furlough or layoff workers as business slowed and social distancing protocols were put in place, while simultaneously, the markets have been on rocky footing.

More than 50 percent of homeowners surveyed said that at least one person who would typically contribute to housing costs had lost their job since buying their home. 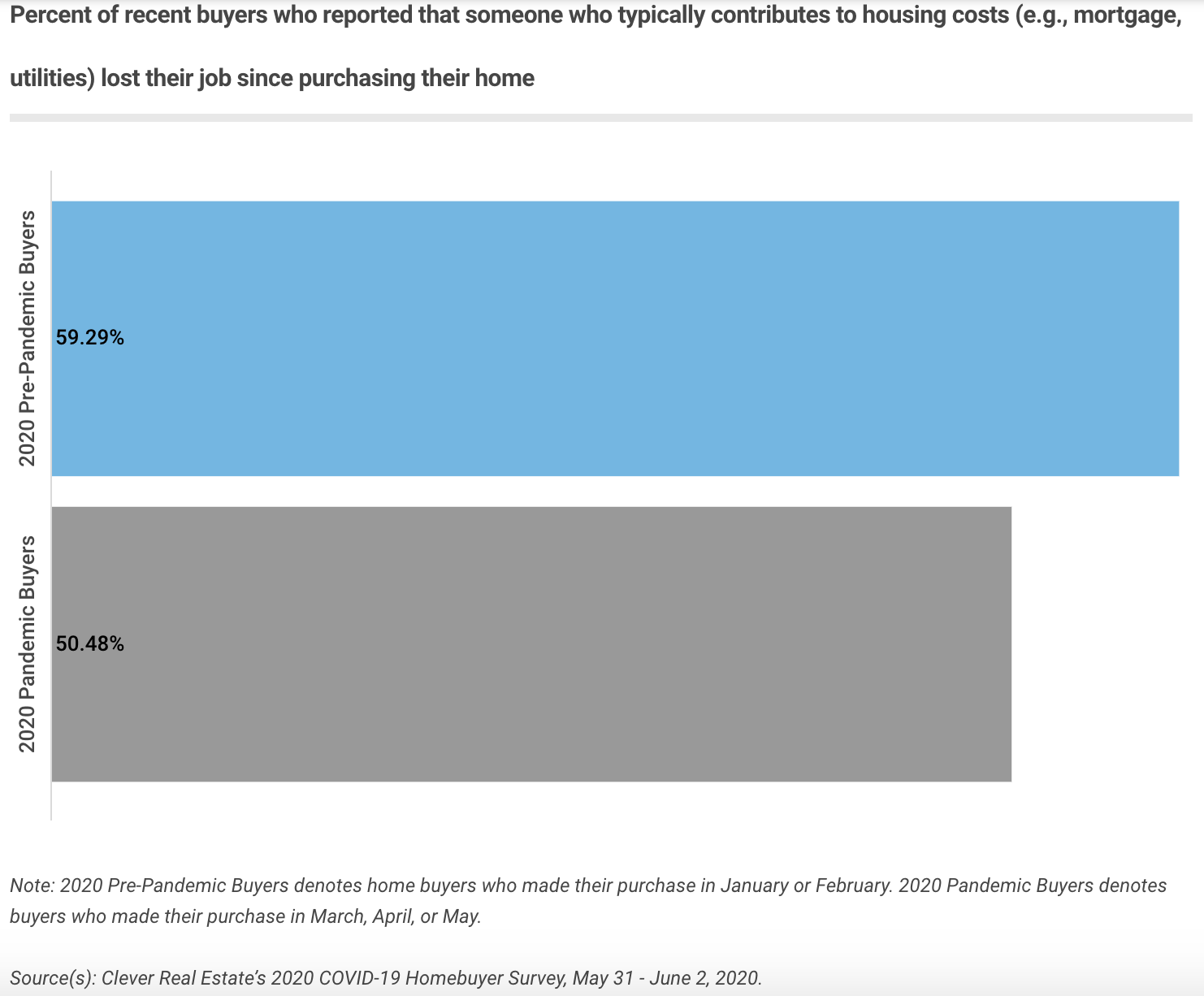 Furthermore, 75 percent of 2020 homebuyers said they were concerned about paying their mortgage as a result of financial hardship in the wake of the pandemic. 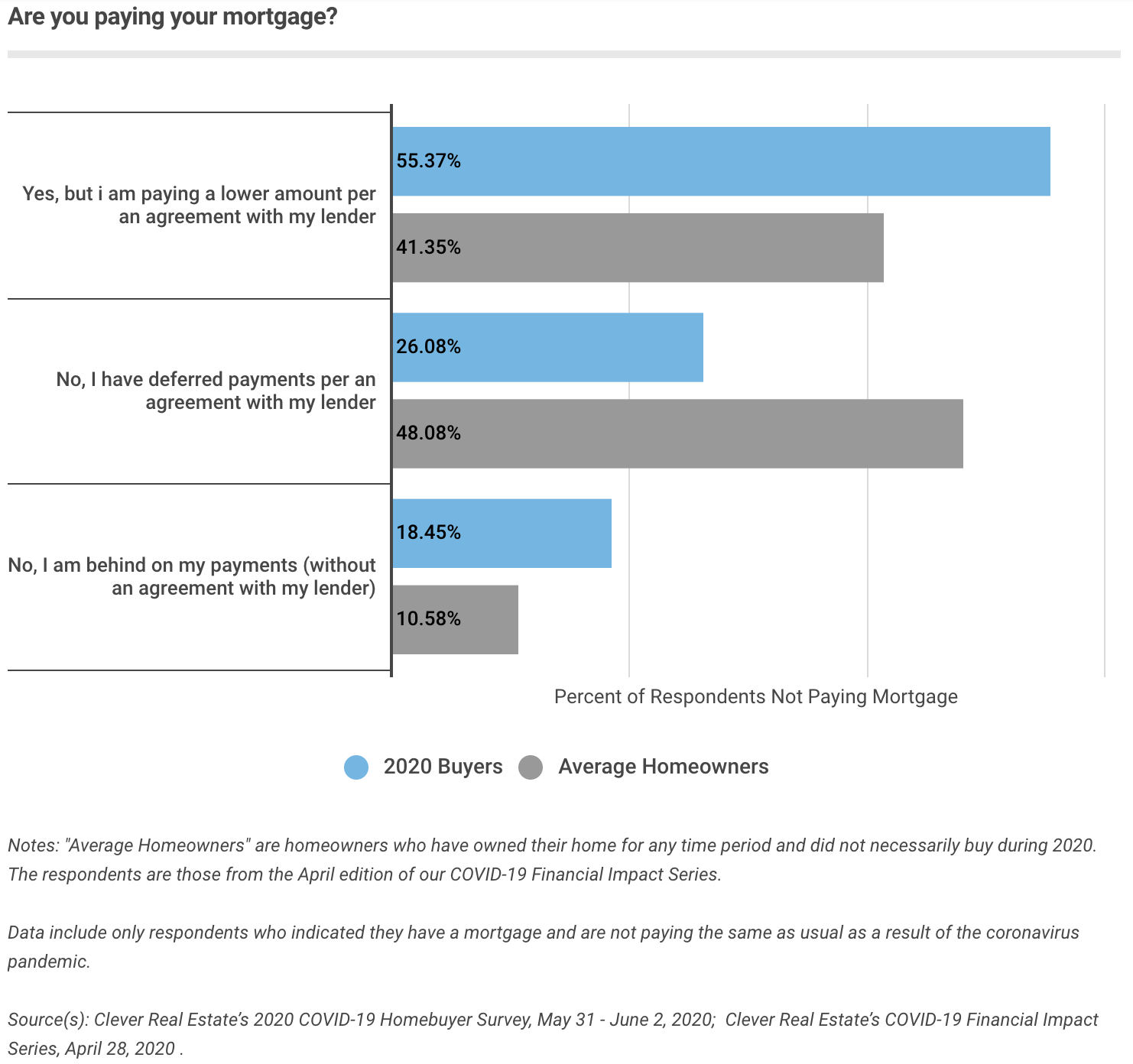 The majority of remorseful buyers had regrets because of how the pandemic might affect their home value, with about 36 percent feeling this way. 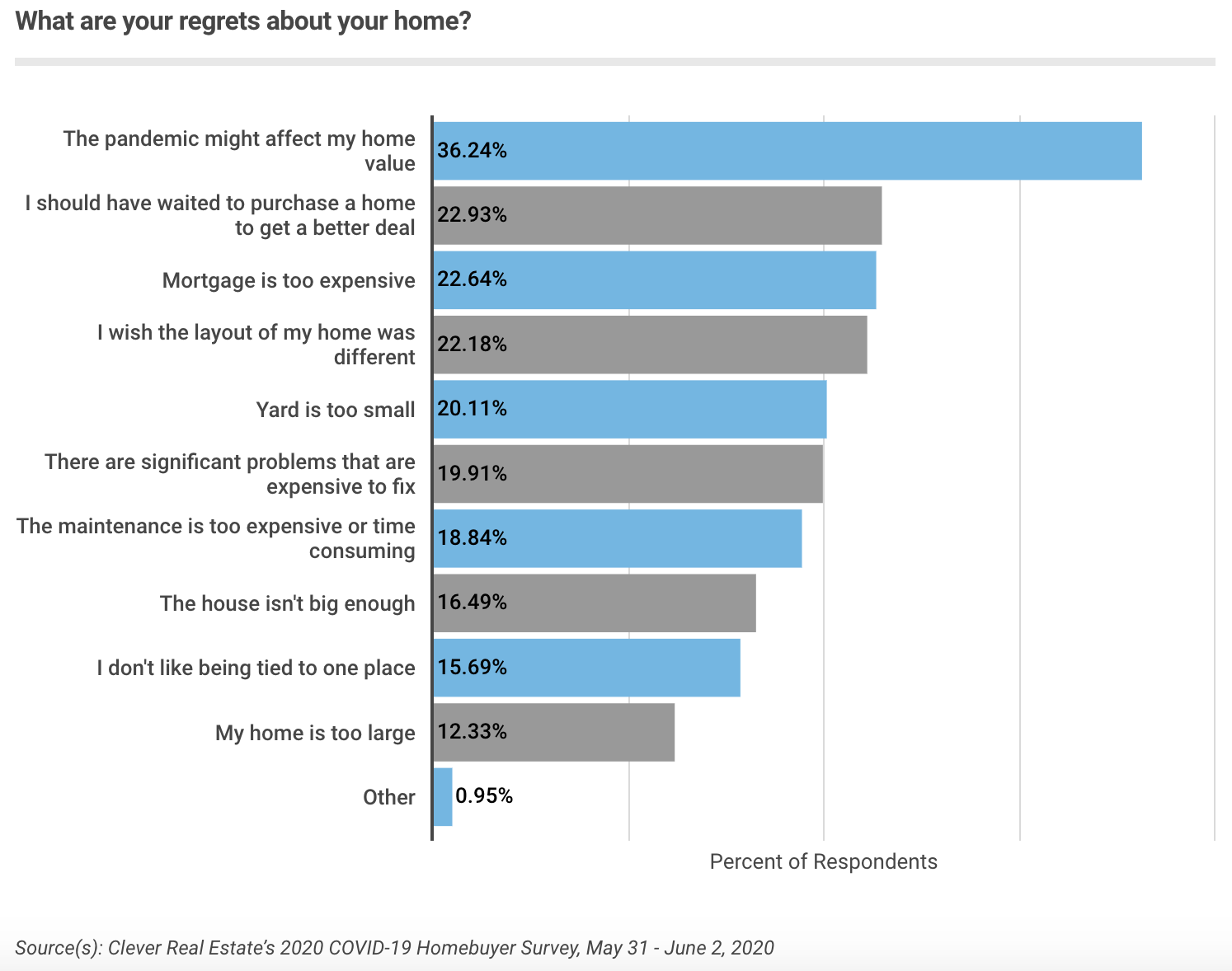 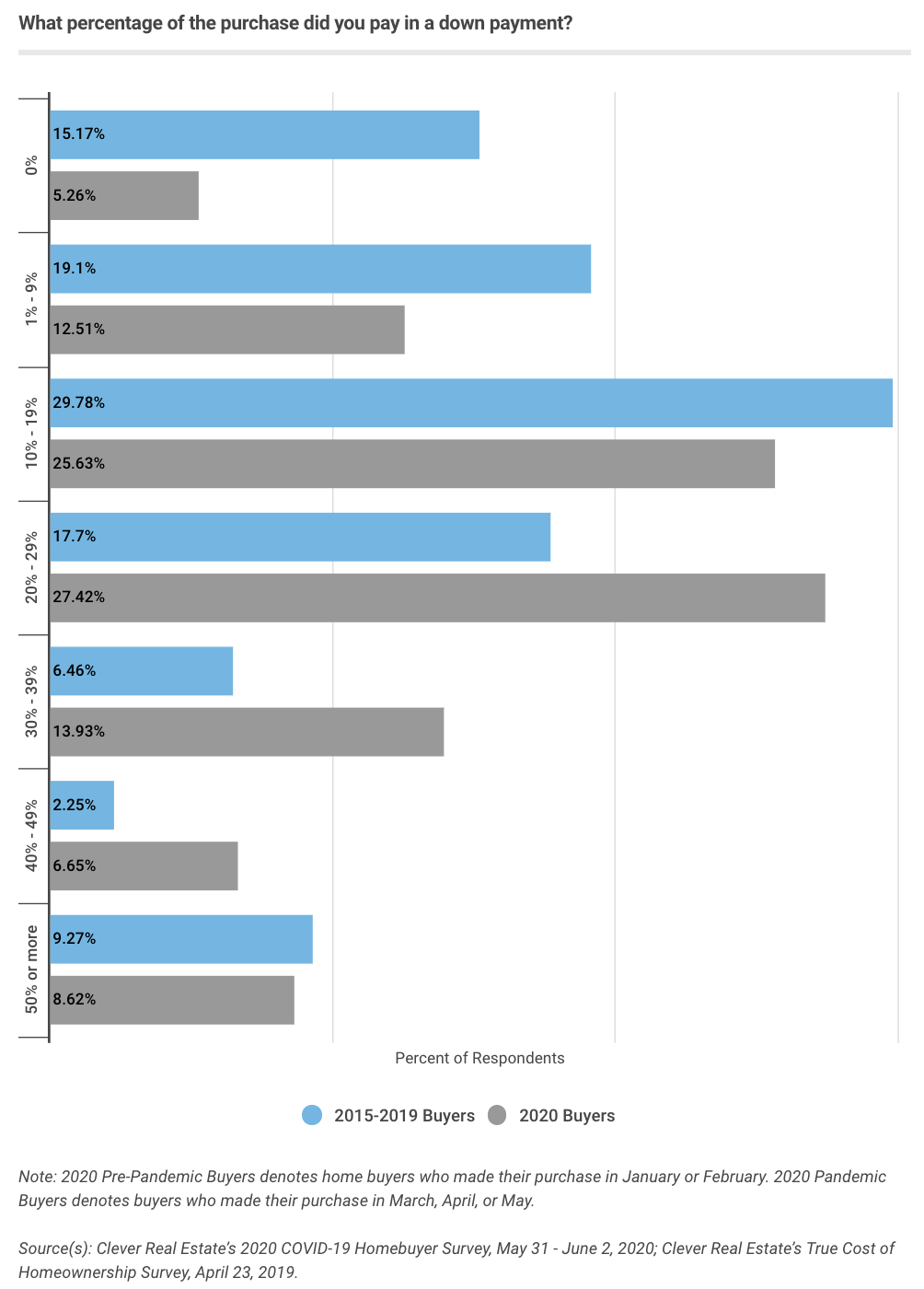 The survey results also revealed that motivations for buyers from the past five years differ slightly from the homebuyers of 2020. Most homebuyers from 2015 through 2019 were largely motivated because of the financial rewards of buying a home versus renting, while many 2020 buyers also noted the need for more space and the desire to live in a better neighborhood as primary factors for buying a home. 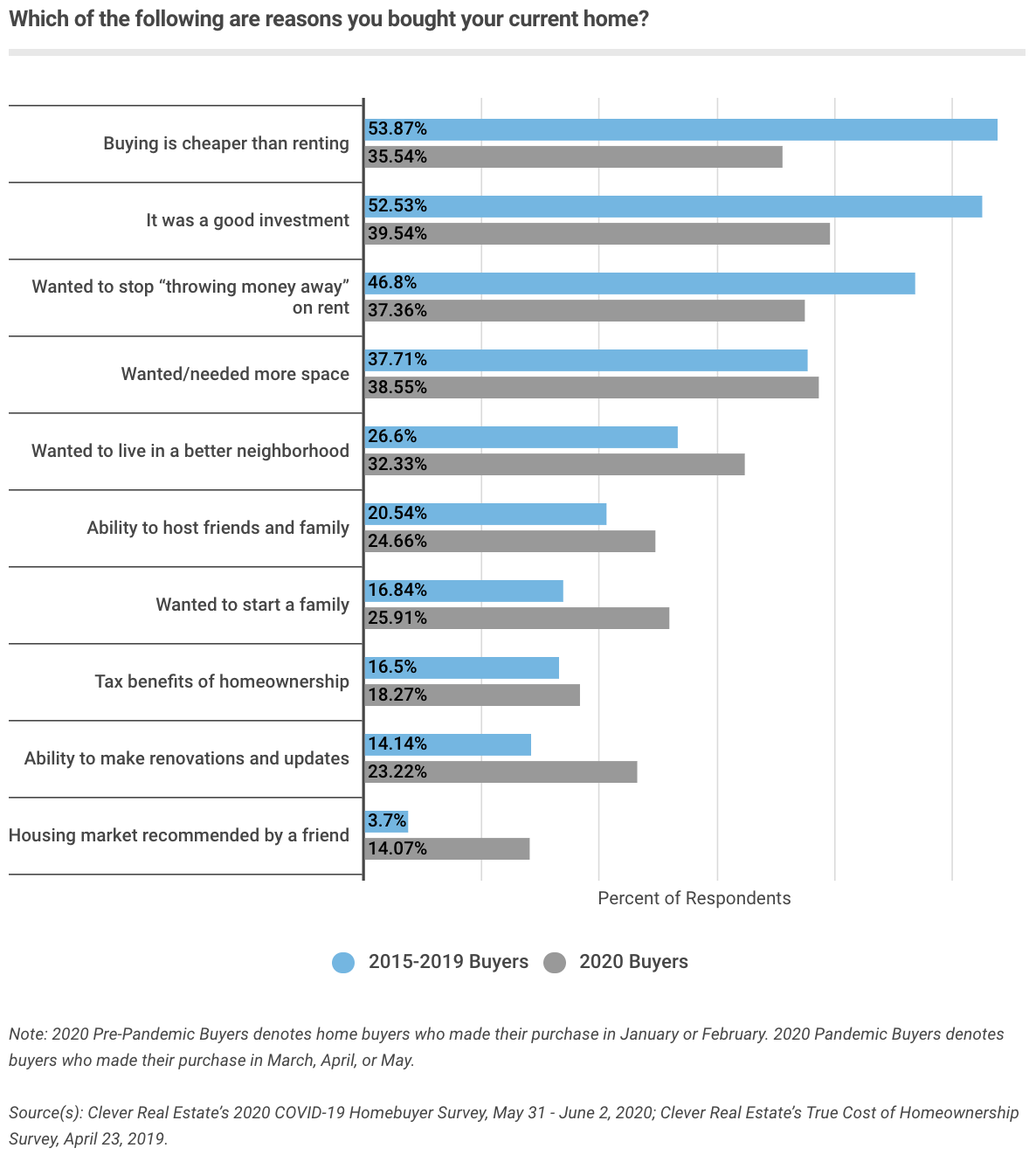 Overall, according to Clever’s data, the top must-have features for buyers in 2020 so far haven’t been so different from what’s become expected in recent years, including a garage, a large kitchen, an open floor plan and space enough for a growing family to expand into. 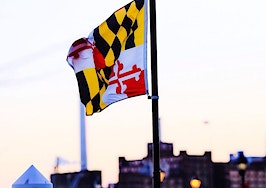 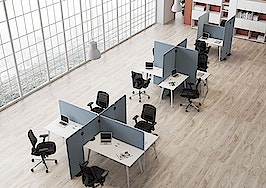 Return to the office right now? New survey says, 'No, thank you'