The Consumer Financial Protection Bureau is requesting comments from stakeholders on the proposed rule, but given the urgency of the crisis, the deadline for comments is May 10.

There have been many questions about what 2021 will bring for mortgage servicers. An influx of responsibilities has been expected, but would they be able to hold back a wave of foreclosures that could send the housing market into a downward spiral similar to the 2007/2008 recession?

Now, the Consumer Financial Protection Bureau isn’t giving them a choice. With its new proposed rules, servicers would have no choice but to prevent foreclosures in 2021.

Last week, the CFPB told servicers to get prepared, because not being ready would not be a good enough excuse for not doing everything they could to prevent a foreclosure wave. It promised to be watching and threatened consequences.

But now the bureau is doing more than threatening — it’s not giving servicers a choice.

“The nation has endured more than a year of a deadly pandemic and a punishing economic crisis,” CFPB Acting Director Dave Uejio said. “We must not lose sight of the dangers so many consumers still face. Millions of families are at risk of losing their homes to foreclosure in the coming months, even as the country opens back up.”

“Last week we warned that servicers need to be prepared for a high volume of borrowers exiting forbearance, and today we are proposing additional guardrails and tools for servicers as they navigate the coming months,” Uejio said. “We will do everything in our power to ensure servicers work with struggling families to find solutions that prevent avoidable foreclosures.”

The new rule would prevent servicers from starting any foreclosures before Dec. 31, 2021. While it lays out the possibility for exceptions, the CFPB’s proposal would certainly prevent a foreclosure wave in 2021.

Here are the changes the CFPB is proposing:

Give borrowers time: Every one of the nearly 3 million borrowers behind on their mortgages should have a chance to explore ways to resume making payments and avoid foreclosure. To make sure borrowers aren’t rushed into foreclosure when a potentially unprecedented number of borrowers exit forbearance at around the same time this fall, the proposed rule would provide a special pre-foreclosure review period that would generally prohibit servicers from starting foreclosure until after December 31, 2021. The CFPB is seeking public input on that date, as well as whether there are more limited ways to achieve the same purpose. For example, the CFPB is considering whether to permit earlier foreclosures if the servicer has taken certain steps to evaluate the borrower for loss mitigation or made efforts to contact an unresponsive borrower. This provision, like the rest of the proposal, would only apply to loans secured by a borrower’s principal residence.

Give servicers options: The proposed rule would permit servicers to offer certain streamlined loan modification options to borrowers with COVID-19-related hardships based on the evaluation of an incomplete application. Normally, with certain exceptions, Regulation X requires servicers to review a borrower for all available options at once, which can mean borrowers have to submit more documents before a servicer can make a decision. Allowing this flexibility could allow servicers to get borrowers into an affordable mortgage payment faster, with less paperwork for both the servicer and the borrower. This provision would only be available for modifications that do not increase a borrower’s monthly payment and that extend the loan’s term by no more than 40 years from the modification’s effective date.

Keep borrowers informed of their options: The CFPB also proposes temporary changes to certain required servicer communications to make sure that, during this crisis, borrowers receive key information about their options at the appropriate time.

The share of mortgages in forbearance dropped below 5 percent in March for the first time since the beginning of the pandemic, as homeowners resuming their payments continued to outnumber new requests for relief for the fourth week in a row. However, as of March 21, about 2.5 million homeowners remained in forbearance plans, according to the Mortgage Bankers Association. 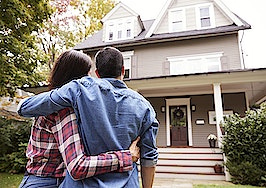 AnnieMac expands mid-Atlantic presence, acquires OVM Financial
Back to top
Only 3 days left to register for Inman Connect Las Vegas before prices go up! Don't miss the premier event for real estate pros.Register Now ×
Limited Time Offer: Get 1 year of Inman Select for $199SUBSCRIBE×
Inmanpot
Log in
If you created your account with Google or Facebook
Don't have an account?
Create an Account
Forgot your password?
No Problem