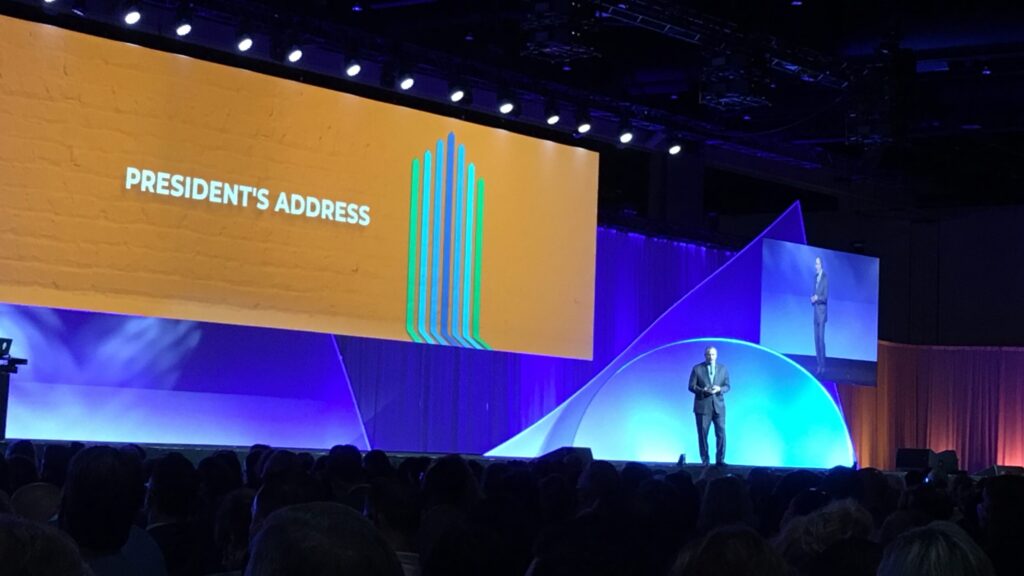 The National Association of Realtors’ outgoing president, Charlie Oppler, ended his one-year tenure as head of the 1.5 million-member trade group by urging Realtors to continue to work toward closing the racial wealth gap.

The National Association of Realtors’ outgoing president, Charlie Oppler, ended his one-year tenure as head of the 1.5 million-member trade group by urging Realtors to continue to work toward closing the racial wealth gap.

Oppler, who has been a Realtor for 40 years, gave his first and last in-person presidential address at the Realtors Conference & Expo in San Diego Friday morning, where nearly 11,000 attendees have gathered for the week.

A year ago, Oppler began his work as president with a historic apology, issuing for the first time a formal apology for past industry policies that contributed to segregation and racial inequality nationwide.

In his remarks Friday, Oppler reiterated that NAR could not change the past, but had taken steps to make a difference this year.

“We need to use our voice in Washington to advocate for racial equity to ensure that Americans, everyone, every color can pursue the American dream,” Oppler said, prompting applause from thousands in the audience.

“Our work to tackle housing discrimination will go on for a long time. But, hopefully, while we’re still here, we can make sure that we close that racial wealth gap. That has to be a priority.

“We’re working hard, all of us, to create an equitable housing finance system so loans are available to everybody without redlining, without what’s happened in the past. So those who’ve been shut out of housing will have the opportunity to own it in the future.”

NAR is the largest trade group in the country at 1.5 million members. The association has previously acknowledged that it actively fought passage of the Fair Housing Act and that it did not strike discrimination from its code of ethics until six years after its passage. NAR has also admitted that “many Realtors were complicit in odious practices like redlining and enforcing racial covenants” well into the 1960s. Moreover, the association long excluded members based on race or sex.

Oppler also noted that at the conference so far, there had been two courses on fair housing “that quite frankly, weren’t attended as well as I would have liked to see them.”

Hundreds of people attended them, but Oppler said he would like to see thousands attend. “We all haven’t learned,” he said, and the crowd clapped.

Earlier this year, NAR unveiled a mentorship program, NAR Spire, that matches Realtor mentors with mentees who are professionals “from historically marginalized communities with the goal of eliminating barriers that have denied opportunities for homeownership and kept people out of America’s real estate industry,” the trade group said in a press release at the time.

Mentees learn about the fundamentals of the real estate industry and receive education on business operations, marketing, appraisal, information technology and finances, according to NAR.

“Our NAR Spire program is here to change some of this, but that takes a long time,” Oppler said Friday.

“We have to do better for the next generation.”

He also pointed to NAR changing its code of ethics last year to make hate speech and harassing speech against protected classes a violation — a reminder that also prompted applause from some attendees.

“And again, we’ve got more to do,” Oppler said.

According to Oppler, everyone on NAR’s staff is “expected to fulfill these values every day in their work” and Realtors as a whole should do the same.

“Diversity is more than just a word, right?” he said. “It’s more than an action. It’s more than an occasional conversation. To me, it has to be our culture. Until it’s our culture, we haven’t achieved what we need to do. It’s got to be woven into everything that we do, day in and day out.”

He urged attendees to “step up” and “tap somebody on the shoulder” to ask them to serve, like someone asked them at one point. “It’s your obligation and your challenge to do the same thing,” he said.

He said the thought of the world his grandchildren will inherit pushes him every day.

“We want to leave it better for those,” he said. “So I’m going to ask you for one last request. Make it a better world than we found it. Make it your job to help somebody, to get involved, to make it better for somebody else.

“Because getting involved is what makes you different. Join a committee. That’s how we all started — somebody asked us to be on a committee. So make the ask. There are so many ways to make an impact.”