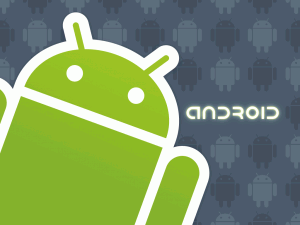 Ever since Google first released the Android OS to phone makers it sparked many debates, and the best known of them is the Apple iOS vs. Google Android.  Both companies have their own ways of doing business and both operating systems have their advantages and disadvantages.  You probably heard about the many Apple advantages (ease of use, large app store and content network, great camera, etc.) however you may not have heard much about Android’s.  So how did the Android underdog become the king with 43% of the smart phone market share over Apple’s iOS (currently 28%)? (Per Nielsen Mobile Insights for August 2011)  Let’s dive into some of the great advantages offered by Android in no particular order.

If you want an iPhone, what you get is an iPhone.  With Android OS, it gets delivered to a huge variety of hardware manufactures.  Do you want a QWERTY keyboard? How about a 3d screen?  Maybe you want a bigger battery, or better camera, or even radio tuner.  Because you are not locked into a single hardware model, you have the freedom to shop around and find one that is right for you.  Some of us will choose based on the power of the device, others will decide on looks and feel.  Still others might go conservative and purchase on best price.  There are so many different Android devices now; you can really find one that is just right for you.

Along the same lines as hardware, every phone manufacturer has the ability to further tailor the interface of the device.  This can be a good or bad thing as there have been some really great interfaces and some lackluster ones.  It is still good to point this out as an advantage however, because the choice is yours.  You again can shop around and find an interface that is to your liking.  And what if you don’t find one you do like?  You can either go with a phone that uses Android’s default interface or there are many great ones on the Android Market that you can install (No Root Required).  Two of my favorite “Launchers” (as they are called) are AWD and LauncherPRO, which give me the option to really customize my phone to exactly what I want.  And then best part is that my phone not only works perfectly for me, but it also is expressive of my personality and tastes. 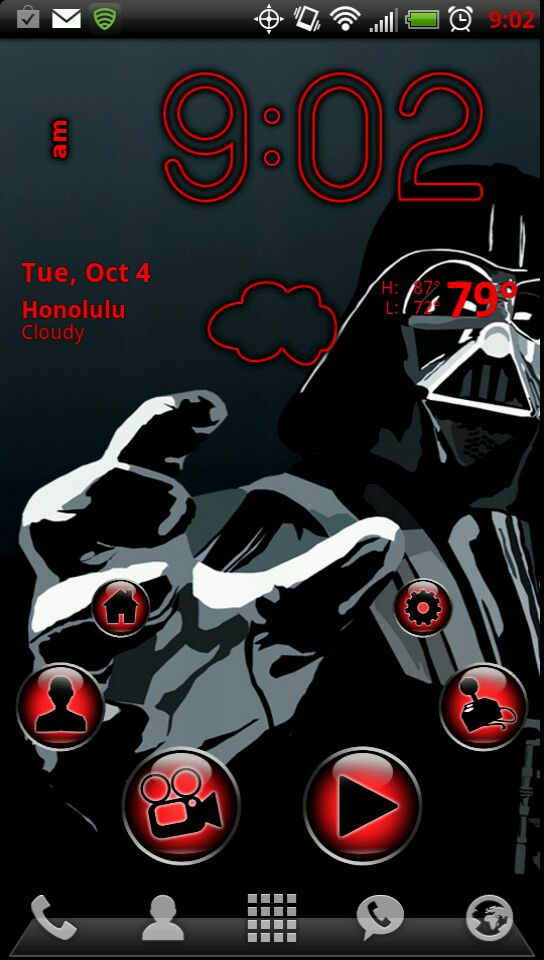 My interface – This shows the customization of what can be done to really tailor it to your style/interest.  I’m currently digging Vader so I themed it as such(complete with Vader Breathing for TXT messages and the Imperial March for my ring tone).  Previously it was Superman.

At first this may seem like something small until you start using them.  Widgets are small components of apps that allow you to view information or access features without needing to open the app itself.  Some examples of widgets would be; seeing Facebook updates, quickly seeing your appointments,  a calculator,  ability to write a Twitter update, see the time, and weather,  etc.  All of this directly from the home screen of your phone.  And it doesn’t stop there, you can also add switches to quickly turn on/off your radios like Bluetooth or WiFi, access controls for your music, or even search the Internet.  Anything you can do with your phone, you can probably find a Widget to do it.  Further, there are a lot of great widgets in the app store that will add huge amounts of WOW factor to your phone.  I personally love Circle Launcher for organizing my apps into cool circles (not boring folders) and Beautiful Widgets for adding a gorgeous view of Time, Date and Weather (all fully customizable to match whatever theme I’m going with for the month). 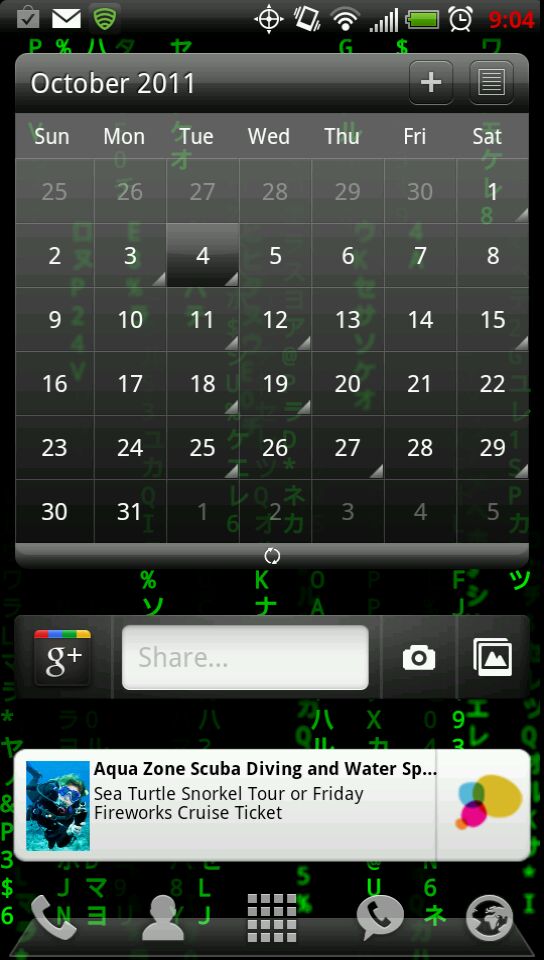 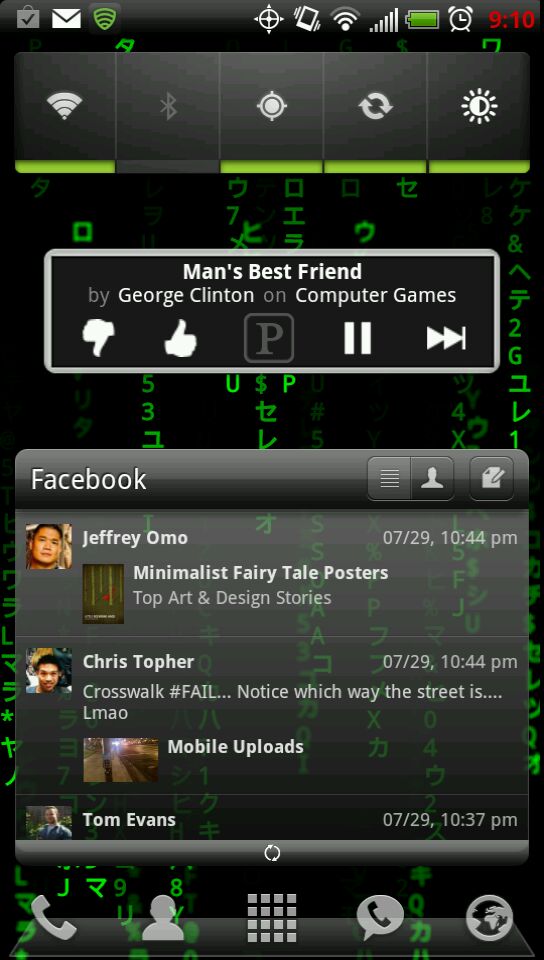 My widgets – This shows some of the Widgets that you can have,  so you can see how they can provide quick and easy access to things you might be interested in.

Apple’s latest version of iOS 5 coming out soon is just now adding some integration for Facebook and Twitter.  However with Android, any app can integrate itself into a variety of contextual menus.  One example of this I always like is with Dropbox.  I’m a huge Dropbox fan and it acts as my preferred shared spot for my files.  During a meeting I wanted to take a picture of the whiteboard and put it into my Dropbox so that I could view it later on my PC.  I had an iPad 2 and after I took the picture, there was no way to move that picture into my Dropbox.  On my Android phone (EVO 3D in case you are wondering), I simply snapped the picture,  selected it and a menu appears with a variety options of what I can do with the file.  In the menu you could see all the variety of apps that could use the picture (Dropbox, Picassa, Evernote, Facebook, Google+, Twitter, Gmail, MMS, Springpad, YouTube, etc.) and all I need to do is select the one I want and off to that app I go with my picture in hand.  This type of integration is key for making the phone work for you.  When I’m looking at a contact, their picture is updated from their Facebook profile, I can click on them and see their Twitter update, then send them an appointment invite with a map location attached.  It’s daunting at first at all that you can really do with Android,  but once you learn it you will have a hard time going back to anything less.

Live in the Cloud

Google was the first to really push the ‘Cloud’ and it shows.  With Apple and Microsoft just now getting there after many failed attempts, this is one of the areas where Android really out shines.  Once you create a Google account, your Android device gets attached to that account.  Here is where all your contacts and app store purchases are kept in sync, along with a variety of other items you might have such as Google Voice for all your text messages and voicemails or Google Docs for all your word processing and spreadsheets.  I recently upgraded from the EVO 4G to the EVO 3D and before I even left the store with my new phone they switched my number over, put in my account information and all my contacts and apps appeared.  It was simply brilliant.  And with the addition of Amazon’s robust cloud storage for all your music, you never have to feel at a complete loss if your phone gets lost or dies.

So there are 5 good reasons to check out Android.  There are definitely more, however a large majority of them become VERY geeky.  If you like simple things, then definitely stick with iOS or Windows Phone 7.  Both of which keep the interface very dialed back and controlled for ease of use.  However if you are looking for a do-it-all tool and are willing to give up a bit of ease for a LOT of freedom, then give Android a try.