I’m a geek. I like to make stuff, tweak stuff and I love to read. 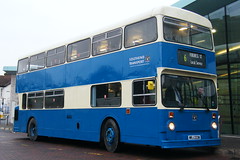 When thinking about the future and how technology and society interact, novels are often as useful as any pundit. Sometimes even more useful.

This is because a good novelist takes the time to imagine not just technology, but how people and groups behave in relation to that technology. Here are three fiction authors that have had an impact on how I view people and technology.

William Gibson is an obvious choice when it comes to novelists who envision the future. The guy coined the term “cyberspace” back in the stone age and ever since then we’ve all been trying to get as fully jacked-in to the Internet as possible.

But it isn’t his old Neuromancer series that occupies my mind as much these days. It’s his three recent novels: Pattern Recognition, Spook Country and Zero History.

Each of these books include marketing agency chief Hubertus Bigend as a character (though not as the main character). Bigend’s approach to marketing and agency-ness is a representation (though perhaps a small bit of caricature) of where marketing is going: data, experimentation, finance and power.

These novels also cover a wide variety of technology and concepts. Some of which have only recently begun filtering into mainstream or slowstream marketing and advertising. Locative media, augmented reality, hyper-exclusivity, cloaked viral campaigns and predictive analytics are things that readers of these books encounter.

Some of the nice things about getting this stuff in the form of a novel include:

Neal Stephenson has written a number of books incuding Snowcrash (which pretty much outlines all the basic concepts required for portable interactive narrative) and his System of the World trilogy.

What I enjoy about reading Stephenson’s work is that it binds together so many aspects of history and technology. His plots often weave through several historical time frames moving some piece of gear or personage to some specific place on earth in order for a variety of crazy stuff to go down.

While Gibson pursues specific aspects of technology and individuality, Stephenson provides a macro view that puts things in a global perspective. As our world gets increasingly connected, encountering historical and multi-cultural uses for tools and technology becomes increasingly important. Stephenson’s books provide a nice format for beginning to think globally.

Though Pratchet’s Discworld series isn’t futuristic sci-fi, it is probably some of the best satire of contemporary culture available. Each of the novels tends to take on one aspect of the culture and society of Discworld and throw it through a great adventure and mystery.

For example, Going Postal, places a con man at the head of a post office which is trying to revive itself in the face of competition from a communication system called The Clacks which is, more or less, like the Internet of today but run somewhat like a string of towers outfitted with lights and shutters. In the novel, the main character has to deal with organizational and operational issues in a completely dysfunctional work environment, exceptionally shady business competition and if he fails he gets executed.

Pratchet’s novels always expose the human aspect of technology or social change, even when the characters aren’t always humans (the zombie lawyers are always good for a chuckle). And it’s this human side that needs to be remembered constantly in the face of media chatter and the continual call to arms of social this or social that.

So enjoy a little reading, let it effect how you think about people, technology and organizations. And have a great 2012!