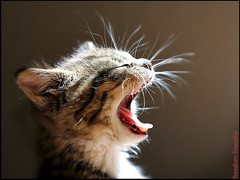 photo by other war

Don’t get me wrong. I think a Zillow Ad Network makes some sense.

And unlike Valleywag, who calls it a “desperate ploy to make sales numbers,” I do see some value in publishers aggregating their advertising inventory for potential real estate advertisers.

I’ll go on the record, I don’t think this is a Hail Mary pass for the Seattle-based search site.

…But it has been done before. Trulia launched a similar deal earlier this year. And, as Valleywag points out, vertical ad networks are a dime-a-dozen these days.

More worrying to me is that it feels like Zillow has lost its edge.

The take-no-prisoners approach Zillow had when it launched now feels anachronistic. The whole thing now feels mainstream. The fire is gone.

Honestly – I had not been to the site for a while. But I went to Zillow.com today and when I got there I was surprised. Is it just me, or is the whole thing looking slightly more subdued now?

What makes me sad is what Zillow represented when it launched was a big inspiration for me to starting this blog.

It was about thinking big and challenging well-entrenched assumptions. It was a big, ballsy play and ultimately, it was aspirational, however controversial it may have been. It was technology unsaddled by expectations. It was the future of real estate marketing.

So it saddens me to see one of the Real Estate 2.0 leaders tack to the center and become generic. But maybe it’s the current business cycle that is forcing Zillow’s hand.

More deeply however, I guess what I’m really sad about is the whole site now just feels… well, kind of boring.

I, for one, hope they can find that fire again.