Looking beyond the check-in is often a struggle for those in the real estate industry, who’s only real exposure to location-based services such as Foursquare has been through the irritating over-broadcast of location statuses pushed to Twitter.

For many, the feature is an annoyance, and it sadly precludes the service as meaningless for many. However, what’s past the check-in, and how that information can be used becomes the really interesting thing about Foursquare, from loyalty initiatives and what’s fast evolving into the future of couponing, to the rapid buildout of some of the world’s most robust city guides. It’s much more than simply broadcasting your location, it’s a way to save money, connect with new places and friends, as well as rediscover venues that you thought you knew already. In short, Foursquare’s mantra of ‘unlocking your city’ is really beginning to become a reality for those using the platform to help them use their own patterns of behavior as they move around their area, to have the app recommend back to them the social validation of what to try and where to go. It’s not about badges, mayorships and broadcasting your location, it’s about learning what you like to do and recommending meaningful things back to you.

FourSquare holds its first ever Hackathon at General Assembly, NY.

One of the key elements driving the seismic growth of the Foursquare community, especially from a developer perspective, is the creative use of their API, on top of which has been developed some incredible products. Perhaps the best known was a site called ‘4Square and 7 Years Ago’, which took your check-in data, and sent you a daily e-mail of what you were doing one year ago. It sounds fairly unremarkable, until you use it, wherein it touches on something incredibly powerful that’s very often absent in our use of social media – nostalgia.

4Square and 7 Years Ago has proven to be one of the most successful projects to have emerged from some of the local New York Foursquare Hackathons, and its growth has been staggering since launch earlier in February 2011. The service recently evolved into Timehop, which now encompasses all of your Facebook, Twitter, Foursquare and Instagram activity, and bundles it back into a daily one-year anniversary e-mail which you receive first thing in the morning. It’s the memory of what you were doing a year ago presented back to you in digestible, fun and at times emotional slices. 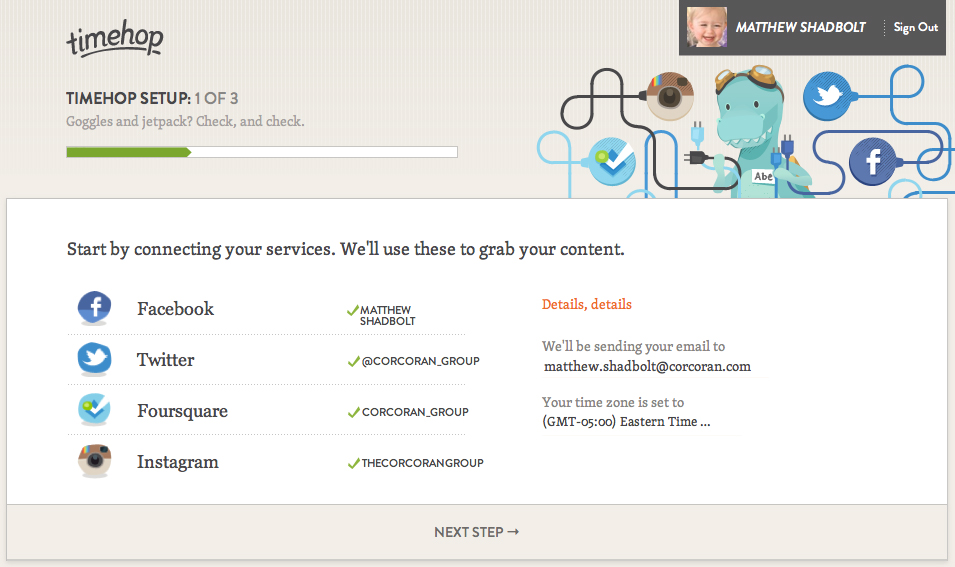 Timehop’s premise is very simple, but potent. They believe that, just as with wine, the content we create inside of social media gains value over time, and matures over a year to the point where nostalgia starts to happen, just like an old shoebox of photos, an old college photo album, or a conversation with an old friend. They’re using the relatively untapped aspect of the timestamp of each piece of content we create to aid the idea of recall for things we may have long forgotten about, as we move through social media’s deluge each day. It creates one of the most powerful things we can ever do online, an emotional bond with the product.

One example much quoted in reference to this idea is how New York technology blogger Anil Dash used the service. He received the daily e-mail reminding him that a year ago he had checked into a restaurant for dinner with his wife, and that at dinner, it was the first time he felt his unborn baby kick. He describes it as “the most meaningful and soulful part of my Foursquare experience” and given the information he was sent it’s easy to see why.

The idea of using the data we create each day and serving it back up to us in meaningful, helpful and interesting ways is something many social platforms are trying to do. Path is making big, beautiful strides into this area, and Facebook’s Timeline feature also explores this (Facebook has also been testing the idea of ‘here’s what you were doing a year ago’ content in profile pages and news feeds – http://on.mash.to/pT1KQ4), but, as Wegener suggests, the notion of seeing everything at once loses value over something ‘anniversary’ driven, and packed into smaller, daily pieces. It’s more meaningful, more nostalgic, more emotional.

To be clear, Timehop’s business model is simply to focus on creating fantastic products that people love, and Wegener himself describes the product as just a pleasurable thing to use. However, that’s not to say it doesn’t have distinct and viable monetization ideas around it. For example, just as with a Foursquare special, if you’d checked-in at a venue a year ago, the daily emails could easily be ‘sponsored’ to encourage return, discounted visits. They could encourage or promote reconnecting with people you were speaking to a year ago (especially if those Twitter discussions were with brands). They could show you images around the kinds of things you were taking with Instagram that were relevant and of value to you, perhaps things to purchase. The timestamp is a powerful form of being able to recycle and create new content around the idea of what you’ve already been doing, making it personalized and tailored specifically to you and your activity. As such, it has untold potential for marketers, as well as just being a wonderful, simple, magical service to use. 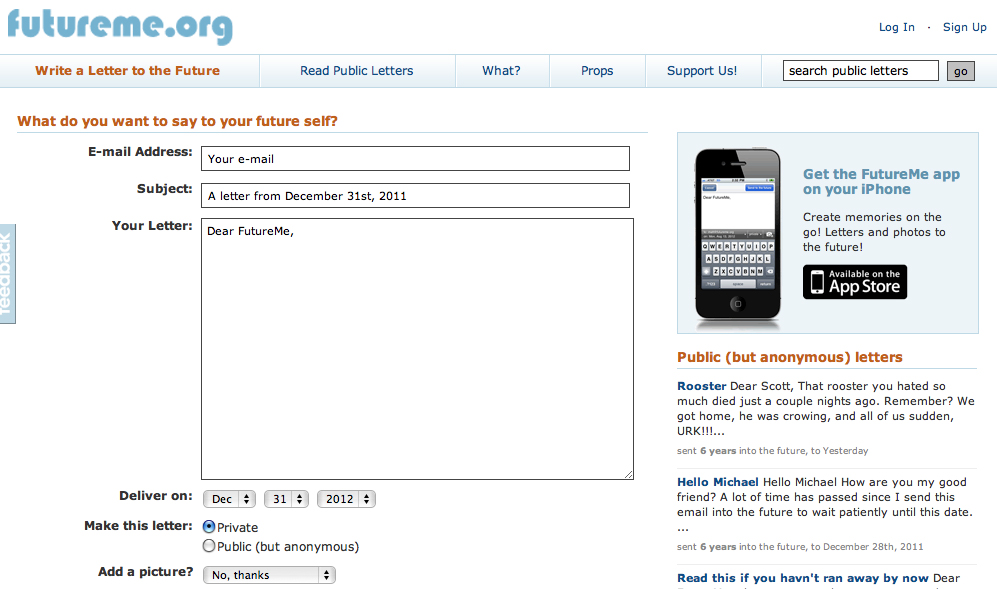 Moving in the other direction, FutureMe.org allows you to send yourself an email in the future. It’s like Timehop in reverse (or perhaps forwards). They describe themselves as follows:

FutureMe.org is based on the principle that memories are less accurate than e-mails. And we strive for accuracy.

See, usually, it’s the future that will reflect back on the present. We here at FutureMe think it’s fun to flip that all around.  So send your future self some words of inspiration. Or maybe give ’em swift kick in the pants. Or just share some thoughts on where you’ll or what you’ll be up to in a year, three years…more? And then we’ll do some time travel magic and deliver the letter to you. FutureYou, that is.

Imagine getting an email from your past self with perhaps your thoughts, aspirations and goals for what you’d like to have achieved a year ago. What would you say to the you of 2013? What kind of conversation would you have with your future self? It’s the same idea as writing a note to your children to read at some point in the future when they grow up. A note for your daughter’s wedding day, written the day she was born, or perhaps a note of congratulations to be read the day they graduate, but written on a day they struggled at school. These new digital services are creating emotional, meaningful, and truly magical ways of reinventing the way in which we send messages to each other, through the very simple premise of altering what happens with an email or social status timestamp.

Think this doesn’t have real estate marketing implications? Send your clients an email using FutureMe one year on from the closing table (with pictures taken in the moment with Instagram) telling them you hope they’re enjoying their new home. Use it to celebrate their one-year anniversary of owning their current home (I’m sure many of you already do this, but aren’t sending those mails while sat in front of them). It’s a potentially powerful and unique way to stay top of mind.

With the ever expanding and perpetual recording of the minutiae of our daily existence, is there value left in being able to forget? Perhaps, but if you put it online, it’s increasingly difficult to forget. Erasing is often more difficult than creating or consuming today. What if Timehop or FutureMe reminded you that you had a terrible day this time last year? Would they need a ‘burn this bridge’ filter?

In a world in which immediacy and speed of information is paramount, if you can adjust content around the timestamp, you can adjust the emotional perception of time itself, and anyone thinking this sounds like Marty McFly’s world is absolutely right. As Betabeat’s Ben Popper wonderfully cautions though, “Mental note, not a good service for people who feel they’ve peaked. But a pleasant reminder that our best ideas often come when we stop trying so hard.”

Now give me my hoverboard. Happy New Year everyone.