Some people are able to really get a lot from conferences. Other people are totally overwhelmed by events–all those tracks and speakers and parties and lists and where does the time go?

I’m going to share a way of breaking down conference events that will help you be less overwhelmed and get the most out of your time whether it’s going to an Inman event or any of the other great events that happen throughout the year.

Breaking it down by space

This is a huge advantage to doing online networking because, due to being out of your usual bubble, you are physically thrown into the learning or networking. The problem swith being overwhelmed come about because there are so many places to be all at once, each of them super stimulating and competing for attention.

“The conference” is always too big for one person to absorb it all and if you try it will drive you insane. 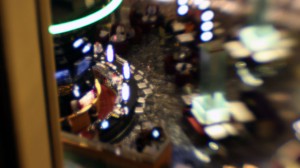 You can get super detailed and construct scale models of all the different zones and map out your plan if you like. But for this post I’ll keep it general. Here are some common conference micro-environments.

This is the micro-environment most people think of when they think about a conference. It’s usually a room with a bunch of chairs and a stage with a projection screen.

Good things to do by spending time in The Sessions micro-environment:

This often overlooked micro-environment often contains a wealth of opportunities. Usually just empty space between individual Sessions rooms, the Hallway is a relatively quiet place where it’s ok to have conversations. Sometimes the hallway even has a comfy chair or two. It almost always has a few power outlets for your geeky gear.

The Hallway is also unique in that the things you can do here are not replicated by following the Twitter hashtag or watching video from the conference. The only way to get some of the benefits of The Hallway micro-environment is to actually be at the event.

Good things to do if you spend time in The Hallway:

Many conferences have a trade show component where show sponsors present their stuff in booths. This usually puts a lot of different vendors in close proximity so you can compare them quickly and simply. It’s a great way to put a face to a name for any services you may already be using as well as investigate new stuff.

Sometimes you can get specific answers to problems you’re having or schedule a meeting with someone from the company to go over fixing something for you.

Good things to do in the Show Floor micro-environment 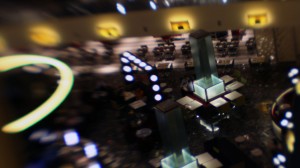 It took me a long time to make all this tiny furniture and install all the little Christmas lights etc. Hope you like it!

Every conference has a Lobby micro-environment. The primary feature of a good lobby is that there are lots of comfortable chairs to crash in, lots of power outlets, free wifi and/or good cellular reception and ideally the furniture is arranged to to facilitate small groups.

Many conferences use Twitter hashtags or other electronic tools to self-promote. But there are often user-generated hashtags as well. Keep them all in your phone and it’s almost like being at the conference: you hear the one liners from the Sessions, the gossip from the Hallway, and see plans forming in the Lobby.

Staying abreast of what’s happening and what plans are being formed is a great use of the Digital Backchannel micro-environment. But don’t get so tuned into the digital world that you miss things in the real world. Twitter will still be there for review later in the day. Being at a conference is a physical, real world thing. Take advantage of that.

Good things to do in the Digital Backchannel:

There’s usually a restaurant that’s closest to the venue. This is where everyone goes to have small group meetings that are private. Deal meetings, introductions and so on are always going to be going on in the Nearest Restaurant micro-environment.

Remember, however, that the table next to you is probably also filled with people from the conference, so don’t think this place is completely private or secure if your business is sensitive.

Things to do at The Nearest Restaurant

The Party micro-environment is always interesting. It usually takes place some distance away from the main conference which will require logistical skills to find. It usually has the veneer of exclusivity (requiring some VIP pass that the party host is handing away to anyone with a pulse). And it’s usually pretty fun.

Things to do at The Party:

The deals and meetings that are most serious happen in the morning. Before other things get in the way. While the rest of the conference is just waking up. Somehow breakfast signals a stronger level of commitment to a project or customer than lunch or coffee or other hangouts.

Things to do at the Breakfast:

Have a good show!