I had the pleasure of interviewing Clara Shih, CEO of Hearsay Social at Real Estate Connect NYC. She is one of the most ambitious 30-year-olds you’ll ever meet! 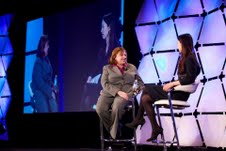 In addition to being the CEO of a fast-growing company (barely 12 months old), she is also the best-selling author of “The Facebook Era.” Before that, she worked for Salesforce.com, Google and Microsoft, and developed the first Facebook business app back in 2007. At the end of 2012 she was named on the Starbucks board of directors.

Clara chatted with our Connect audience of almost 1,500 about what the buzz is in Silicon Valley, how her company puts the control of the brand back into the hands of the people responsible for the brand, and some of the big clients she works with (like Farmers Insurance).

Hearsay Social was also one of the first companies to have access to the Google Plus API. Hear what she has to say about the future of Google Plus and where she sees that headed in the next 12 months.

We also chatted about Facebook — Clara wrote the highly acclaimed book, “The Facebook Era.” Clara explains how Facebook is changing the norms and expectations of everyone and the cultural movement happening right now.

Additional Connect keynote videos you may be interested in:

The Past, Present and Future of Augmented Reality [VIDEO] http://shar.es/g12pC