There has been a lot of buzz over the last 24 hours about Twitter. 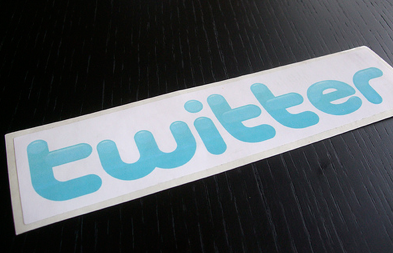 Dick Costolo, CEO of Twitter, was one of the keynote speakers yesterday at Mobile World Congress yesterday #mwc2011

Here a few of his tweets that I thought were particularly interesting: 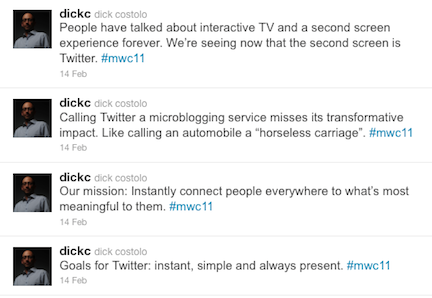 I love what he says about the second TV screen being Twitter. If you were on Twitter during The Grammy’s, The Super Bowl, or any other “big” TV event – you know what I mean. Watching the tweet stream during a live event adds a whole other element to watching TV – and really anything for that matter. The same applies to events – watching the conversations from events has been one of the best ways I’ve been able to connect with new people and new ideas.

There is a huge opportunity here for Realtors – just ask Michael McClure (@ProfessionalOne) how it’s transformed his business!

I also love what Costolo says about Twitter being transformative. Twitter has truly transformed our industry. Never was there a better and faster opportunity to get the word out and spread great information.

Twitter has definitely moved beyond “what I am having for lunch”  – which by the way – I NEVER see that tweet but I swear, anyone not on Twitter claims that this is why they don’t want to be on Twitter! Anyone else experience this? :)

According to Costolo, mobile is the future. He says that 40% of all tweets happen on a mobile device and 50% of all users are active on more than one platform. I know personally, I definitely fall into both of those categories. I am on Twitter in the morning on my iPhone before work, on my desktop using HootSuite during work and then again after work and on the weekends on my iPhone again – and I know I’m not alone.

He talked about his goal of creating a standard interface among all mobile clients. As it is right now when you use Twitter on a Blackberry, Android or iPhone – you have three different experiences and the user must “re-learn” how to use the application all over again! This applies if you use a 3rd party application like TweetDeck or HootSuite – there is a learning curve on learning the ins and outs of the application.

Of course it wouldn’t be interesting if there were some rumors swirling around. The latest rumor is that Google is interested in Twitter. At MWC, The CEO of Google Eric Schmidt avoided answering the Twitter question by saying:

We’ll see if that changes in 2011. My prediction is that as the year progresses there will be a lot of talk about the value of Twitter and Facebook and who is poised to make that purchase. Maybe AOL is interested now that they have purchased the Huffington Post?

What is really interesting to me is although there is a ton of buzz about Twitter, there are still not as many real estate agents and brokers on Twitter as you’d think. I hope that 2011 is the year that changes.