This past August I gave a presentation on the main stage at Connect SF on Facebook, and one of the points I really wanted to drive home was that “social media needs to start at the top.” This is something that has percolated in my mind for some time and throughout the halls of various real estate conferences I’ve attended.

The big question remains, “Why are there so few real estate CEOs on Twitter, Facebook and other social networks?”

As you might imagine, this problem isn’t just within the real estate industry. In a recent study on CEO.com, they reported that 70 percent of Fortune 500 CEOs have no presence on social networks. 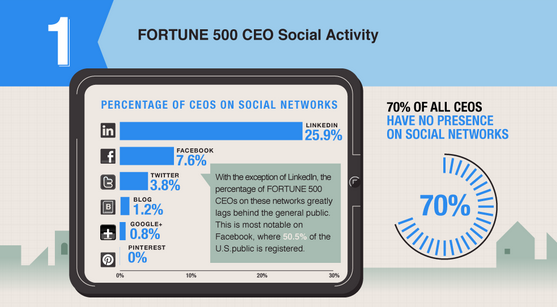 Here are some interesting stats from that survey:

So the big question is ‘why’? 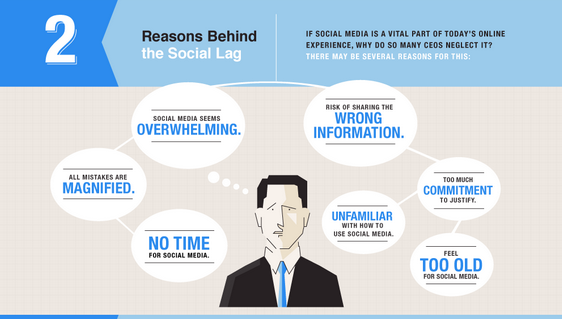 Reasons Behind the Social Lag

A lot of the real estate C-level executives I’ve spoken to casually about this topic, for the most part, all agree that their company should be “on social media,” but, for themselves, they don’t have the time, don’t know what to say, don’t “get” why it would be important, and the list goes on and on. Many perceive social media engagement to be uncontrollable, inviting too much reputational risk.

In my opinion, there is a HUGE opportunity for CEOs in the real estate space to lead by example from the C-suite.

For example, outside of our industry, Tony Hsieh, CEO of Zappos, publishes internal emails on Twitter for his 2 million followers, giving an inside peek into his company’s culture and success. People love getting that “sneak peak” inside a successful company like Zappos. There is a hunger to hear directly from CEOs without the corporate filters that dilute authenticity.

Within real estate, CEOs like Spencer Rascoff, CEO of Zillow; Sherry Chris, CEO of Better Homes and Gardens Real Estate; Pete Flint, CEO of Trulia; Austin Allison, CEO of DotLoop; and our own Brad Inman, publisher and founder of Inman News, top the list of some of C-level executives engaged in social media in the real estate industry.

Unfortunately, that list is a short list. There are others in the real estate industry, but they are few and far between.

So why is this is big deal?

Why is it important for CEOs in the real estate industry to not just acknowledge the importance of social media but be engaged in it too?

I believe there are three main reasons:

1. Being responsive. Too often, in times of crisis, CEOs work with their PR team for a carefully crafted statement. But meanwhile, the Twitter universe is ablaze with tweets that can cause irreparable harm to a corporation. By being there firsthand to respond to a negative tweet or negative publicity (or positive) is a huge reason.

I remember a few months ago I had a great experience at a Kimpton hotel and so I tweeted about it. A very warm “thank you” tweet came back to me, not from the Kimpton Twitter account, but from the CEO herself. Needless to say, I was impressed. Imagine, if the CEO of YOUR company responded to positive or negative tweets, how much more brand equity would you gain? I have seen on numerous occasions Spencer Rascoff do just this, and personally respond to tweets that go to the @zillow handle from his handle.

2. Lead by example. It’s not enough anymore to just have a social media manager. A CEO needs to be involved in social media to really see and interact with his or her clients, consumers, other agents and brokers. How can a CEO of a franchise or even a boutique real estate office expect their agents to embrace and utilize social media to the best of their ability if the CEO is still saying, “I don’t have time for it. I don’t know what to say.”

The way this industry is going to change and grow with social media and technology is for the leadership to change and grow with it. Instead of the social media manager running a workshop on “the top 10 ways to maximize a Facebook page,” imagine the CEO embracing social media wholeheartedly, not sarcastically, not with an eye-roll, but really truly understanding the value to his or her company and brand. When agents see this firsthand from their CEO, the benefits are enormous. Just ask Sherry Chris. Better Homes and Gardens Real Estate has approximately 7,500 agents, but they have well over 30,000 “likes” on just one of their Facebook pages, and the huge reason behind that is the leadership Sherry shows on Twitter and Facebook. Simply put, she walks the walk.

3. Stand out from the crowd. Why was I able to list off five CEOs who are doing a great job in social media in real estate? Because quite frankly, there is not a long list. I am hoping this will change. There is an enormous opportunity to attract the “next gen” as we all keep hearing about. The next gen of 20-, 30- and 40-somethings who are tired of the real estate business the way the business has always been done, are tired of accepting the status quo, and who are looking to their leadership; pleading and begging to stand out from the pack and do something different, be something different.

Look at Krisstina Wise, CEO of The GoodLife Team. Featured on Apple’s website, an Evernote ambassador, and Inman Innovator recipient, Krisstina is the epitome of not accepting the status quo. But we need hundreds of people like Krisstina who are not OK with “the same old, same old.”

Consumers have a keen understanding of social media’s leadership benefits. In a recent study from BrandFrog.com, there were some really telling findings:

Better Equipped CEOs - those who engage in Social Media

One reality is crystal clear: Social media has forever changed the conditions in which CEOs operate. The perception by consumers when CEOs are present and engaging on social media far outweighs not being there; it enhances the brand image, and it shows tech-savviness and an ability to lead in a social world, and a relevance to the next gen.

While CEOs are still expected to juggle a million details, they must also continuously communicate company vision, mission, and values –- and social media is the perfect outlet to do so.

I sincerely believe that to see true change in this industry it has to start with the top down.