Engagement is one of the most oft-used words in the world of Social Media, more specifically within the similar-but-not-identical realms of Twitter and Facebook.

This word gets talked about so much for good reason: because, at its core, it might be the single most important, foundational key to success in Social Media.

That’s easy. Just as in real life (IRL), engagement is simply communicating with people. The channel is irrelevant. Think of it as nothing more than sitting down with a person to have a cup of coffee. What would you say in that situation? More times than not, that’s exactly what you’d want to say on Twitter or on Facebook or in a blog post.

OK, you may be thinking, that was sort of common sense, but WHY is engagement so crucial to success in Social Media?

WHY Does Engagement Matter?
My answer? For the exact same reasons that engagement is so important IRL.

First, because success IRL is predicated heavily on the quality of the relationships you build. I won’t attempt to explain or justify this point, because I think most people know it to be true.

Second, because this same principle – the idea of success hinging on the quality of the relationships you build – is equally true in Social Media. Remember that people are people, whether online or offline.

Third, because there is a direct correlation between the quality of the relationships you have and the degree to which you successfully engage within those relationships.

To prove this point, I have three illustrative questions for you:

If you have normal human relationships, your answers to these three questions were probably, “zero,” “zilch” and “nada,” respectively.

Because human relationships are predicated heavily on the ideas of balance, give and take, and sharing and receiving, right? And all of those things are – in one form or another – centered around the idea of engagement.

And that is true NO MATTER WHAT THE CONTEXT: online and off-line, the principles are universal.

HOW Can You Engage Better?
OK, so now that we have some understanding of why engagement is so crucial, let’s look at seven practical things you can do within Social Media to elevate your “engagement game” immediately: 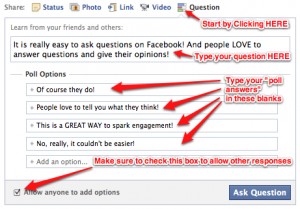 Just about everyone loves to voice their opinion. Tap into this by simply asking questions. On Twitter, just ask your followers a question that you think will spark a response. And on Facebook, it’s even easier, as one of the primary posting options is asking a question. See the image below for a quick visual explanation. Finally, in terms of blogging, I’ve found that a great way to spark engagement is to end your post with a question. This does more to kick-start conversation than simply giving your opinion on the topic about which you’re writing.

2.    Leave no communication unreturned — This is really easy: if someone sends ANYTHING to you — a Tweet, a comment on a Facebook post you wrote, a comment on a blog post you wrote or a video you made, etc., make sure you reply to it. I learned this from Matthew Shadbolt of The Corcoran Group, Manhattan’s largest residential real estate brokerage. If a company of that magnitude and significance can employ that Social Media philosophy, so can you.

3.    Counterpunch — Sometimes, we all lack for something original to say. And that can become a large inhibitor to our ultimate success in terms of engaging. The good news? That doesn’t have to be a problem. Simply respond to things other people Tweet or post about. I view every Tweet on my Tweetdeck as a potential entree into a conversation, a possible start to engagement. Just look around, find a random Tweet or Facebook or blog post that interests you, and react to it openly and honestly.

4.    Be timely — Again, just as IRL, you often have to be “in the moment” to engage with other people. In Twitter, Tweets are sort of like a vapor: here and gone, very quickly. If you reply to things someone Tweeted yesterday, you’ve probably lost your opportunity to engage. Facebook is different, because it “threads better,” and you can carry on conversations with people over the course of many days, but, in general, communicating in real time is better.

5.    @, Tag and Personalize — Everyone loves it when someone else Tweets or posts or blogs about them. This is another universal truth. If you want to open the door to real engagement with someone, go out of your way to create positive content about them. Or simply send them an “@” message on Twitter, or tag them on Facebook.

6.    Curate content — One thing I’ve learned from living my life largely inside Twitter for the last two years is this: the people that GIVE the most and SHARE the most have the most success. Period. Everyone loves quality content. Go find it and serve it up for them on Twitter or Facebook. And if you want a blueprint for content curation, I would implore you to read this incredible blog post written by Inman News’ Chief Evangelist, Chris Smith (@Chris_Smth). Just do what he suggests and watch your engagement explode.

7.    Don’t talk about you — The surest way to curtail engagement is to be a self-centered, all-about-me person. Great conversationalists never talk about themselves. They focus all of the attention on the other party involved in the conversation. The same is true for great engagers. Read someone’s Twitter profile. Learn a tiny shred about them as a person. Then watch as they delight that you know what school they attended, or the name of the city in which they live, or what kind of dog they have. It’s the little things that thrill.

Relational, Not Transactional
Final takeaway: When in doubt, think about this, which I consider the most important “success thought” you can have in social media. While it is a general, over-arching idea, it absolutely applies to engagement specifically, and it is this: social media is relational, not transactional. In other words, focus on the person, and let everything else — including the idea of picking them up as a client — be secondary to that.

If you approach every person and every situation you encounter with this as your overriding perspective, I promise that the quality and quantity of your engagement in social media will improve dramatically.