NEW YORK — In Internet marketing, the key to getting website visitors to “convert” — fill out a form or purchase a product — is deceptively simple: Make it easy for them.

“More work puts a barrier between your customer and what you want them to do,” said Natalie Tomasso, senior reporter at WhichTestWon.com, a testing technology publication for marketers.

There are at least five layout components that can be tweaked to optimize Web forms for consumers, according to Hale.

1. Field labels. Forms with labels on the left side of fields take longer to fill out, according to eye-tracking studies, Hale said. When the labels are on top of fields, site visitors fill them out more quickly. A single column also converts better than two columns. Website designers may try to save space by splitting a form into two columns, but visitors have a harder time figuring out which labels belong to which fields, Hale said.

2. Number of fields. Site visitors are more likely to fill out shorter forms because they require less effort. The number of questions on a form correlates closely with the rate at which people drop off, Hale said: At five questions, the drop-off rate is 2 percent; at 10 questions, 4 percent, and so on. Only at about question 35 does the correlation end — presumably because those who have stuck with the form that long are willing to stick it out to the end.

3. Pagination. People are more willing to fill out a lot of questions when they’re prepped beforehand and can see how far they’ve gone with a progress bar. Beyond that, whether a form is more effective as one long form or a form divided into pages varies according to personal preference. One rule of thumb, however, is to group related questions together for ease of comprehension.

4. Field size. Fields that are much larger or more visually prominent are more likely to get filled out, Hale said.

5. The button. Buttons to “log in” or “register” can be confusing at the wrong time — while someone is purchasing a product, for example. At one website, turning a “register” button into a “continue” button and adding the text “you don’t need to register to purchase” increased purchase rate, Hale said.

Offering incentives can also help increase conversion rates. Hale recommended a new service called RewardLevel.com, which allows users to offer a reward to their visitors for filling out a form. Rewards come from outside companies and can include discounts on service or a free limited-time subscriptions, for example. The service is free to use and runs on fees it gets from reward partners such as Amazon, Evernote and KISSmetrics.

Though filling out a form may take some time and effort, people are more willing to do it when they believe they will get something for free, Hale said.

“There’s this black hole of irrationality when it comes to” getting something for free, he said.

Hale also encouraged attendees to play to people’s emotions and create forms that people love to fill out. The sign-up form for video-sharing service Vimeo, for instance, is designed to be pretty and “makes people smile,” Hale said. Colloquial language can help as well. For example, Wufoo’s “forgot password” form says, “That’s OK. Everyone forgets.”

To truly know what works, both speakers advocated testing conversion rates for different layouts. Website optimization services such as Unbounce, Google Website Optimizer and Optimizely.com conduct A/B testing on websites. That means they take the traffic coming to a site, split that traffic randomly into equal segments, and show each segment different versions of a page at the same time. The services record the results and tell the user which page got more conversions. The testing happens at the same time in order to eliminate external factors that can confound results, such as time of day or season.

Before testing, users should look at their website analytics to have a baseline for changes, Tomasso said.

There’s no telling what will appeal to consumers, Tomasso said.

You can compare two layouts and “you can know in your gut that this one’s going to be the winner, but you might be surprised,” she said.

In another test, a university website found that one version of a landing page got more form submits in the morning, while a second version — which had a different headline and layout — got more submits in the afternoon. However, Tomasso cautioned attendees against changing more than one page element at a time — what drove the difference on the university page was ultimately unclear because there was more than one difference between each version. 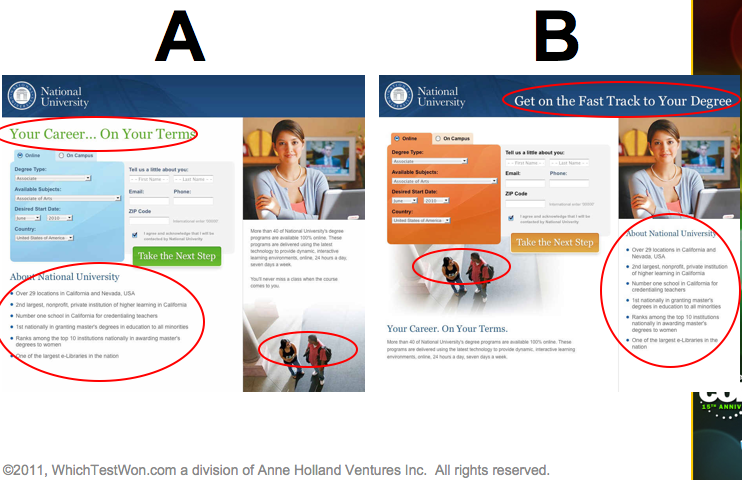 Another test found that a form placed on the right side of a page vs. the left side got 24.6 percent more form submits. 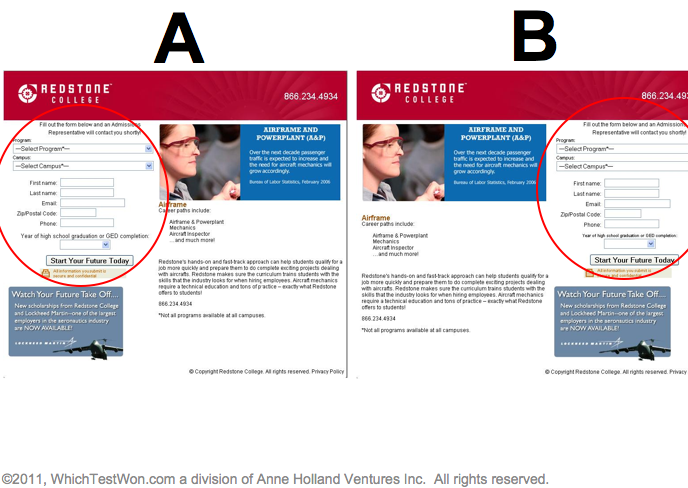 Images on pages can have different effects. For example, in a test for a site devoted to obtaining donations for victims of last year’s earthquake in Haiti, one version of a page was split into two columns, with a description and an image on one side and a donation form on the other. In another version, there was one column with a description and a form, but no image. 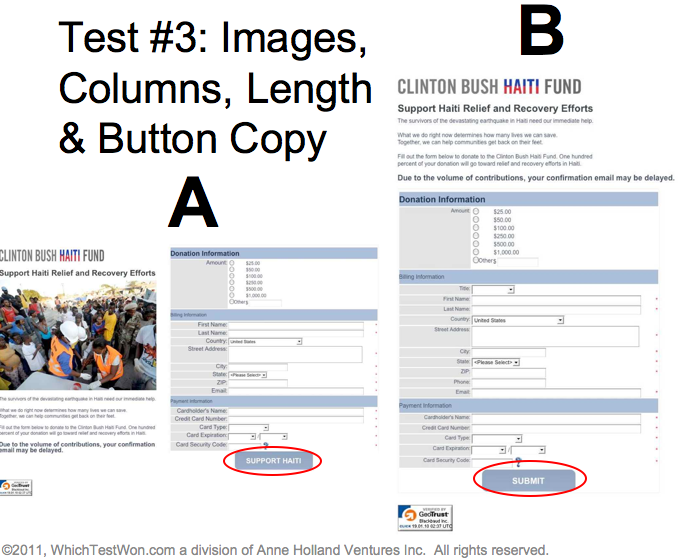 The first version received a 10.2 percent lift in donations per page view, equivalent to $1.02 million. Tomasso attributed the lift to two factors: the image, which appealed to viewers’ emotions, and the form placed in its own column, thereby putting the submit button above the fold and making the form look shorter.

Another test compared real estate search widgets. In the first version, the headline read, “Find your dream home or apartment”; there was one location field for city, state or ZIP code; there were radio buttons for existing homes, foreclosures, new construction and rentals; and the submit button read “Search listings.” In the second version, the headline read “Find existing homes for sale”; there were three location fields; instead of radio buttons for listing types, there were tabs; and, the submit button read, “Find homes.” The second version also had a generic image of a house for sale.

The results? The first version won: 8.5 percent more people clicked on “Search listings” than on “Find homes.” The reason behind the difference is likely that the first version was simpler in layout and therefore easier to fill out, Tomasso said. The headline about finding a “dream home” also appealed more to people’s emotions. The image in the second version likely did not and may have decreased the prominence of the widget as separate from the rest of the page, Tomasso said.

Besides Wufoo and WhichTestWon, other useful reference sites for ideas on how to increase conversion rates are abtests.com and Visual Website Optimizer.